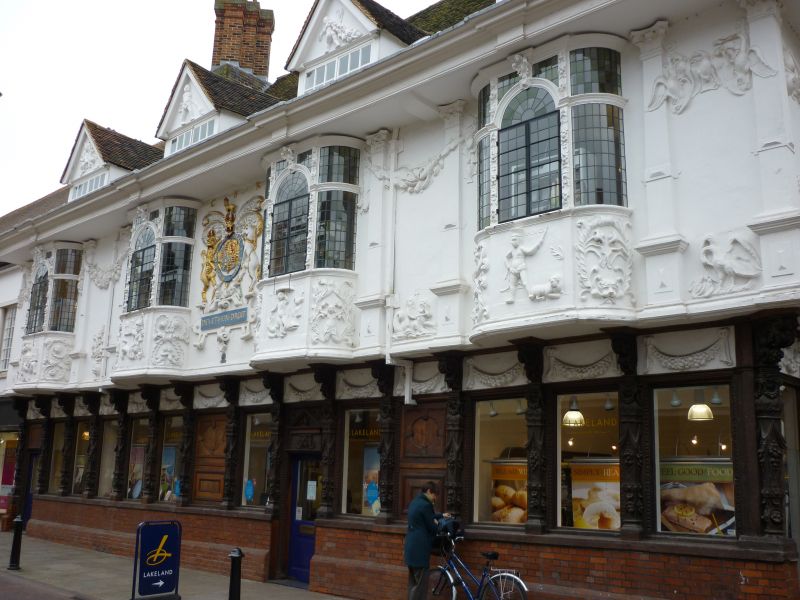 2.
Also known as Sparrows House, after the family which was responsible for
its magnificent early C17 pargetting. It was built originally in tile C15
and re-adapted or rebuilt in 1567 by George Copping, who sold it a few years
later to the Sparrow family, in whose possession it remained for over 200
years. It is a very fine building, well preserved, with much of its original
detail intact. A timber-framed and plastered house. 2 storeys and attics
with a jettied upper storey. There are 4 fine rounded bay windows on the
north front and one on the west front on St Stephen's Lane, with leaded lights
and arched transoms in the centre lights. The panels below the bays have
pargetted figures representing America, Africa, Asia and Europe. Between
the 1st storey bays there are pilasters on pedestals with more decorative
pargetting. The centre panel has a coat of arms. The ground storey has
continuous windows (C20) between the carved shafts which support the brackets
of the projecting 1st storey. A timber-framed and plastered wing, extends
south in St Stephen's Lane. 2 storeys with a jettied upper storey with a
moulded bressumer. Part of the 1st storey has exposed timber framing. 3
window range, (2 casements with leaded lights and one double-hung sash with
glazing bars. There is a small courtyard at the rear with a jettied upper
storey with exposed timber-framing with ornamental bracing and continuous
mullioned and transomed windows with leaded lights. Roof tiled, with 4 large
gabled dormers on the north front on St Stephen's Lane, with pargetting in
the gables, and a heavy projecting eaves cornice. The interior is also very
fine with ornamental ceilings and a fine staircase with twisted and moulded
balusters. The 1st storey has a great room 46 ft long with a panelled ceiling
with heavy plaster ornamentation. There is also some panelling and an original
fireplace. ANM.