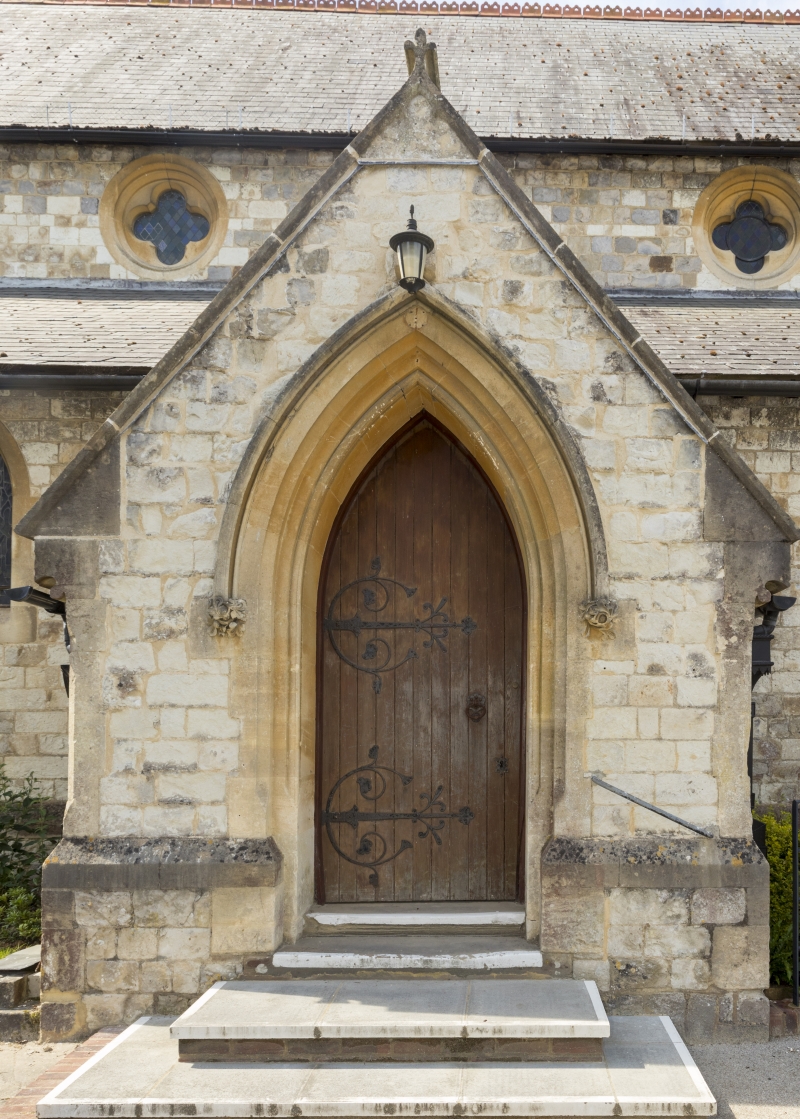 PLAN: Nave, chancel, lean-to N and S aisles, N porch, NE chapel (under its own gable), NW bell-turret, SE vestry, hall to the S linked to the church by a small glazed passage.

EXTERIOR: The church as it is now appears is a product of rebuilding schemes in the 1860s and 1870s (see History below) and is in the Early English style, taking its motifs from the C13. As was usual with Victorian churches, the various parts are all separately articulated. The nave has five bays although the S aisle, built before the nave was lengthened in 1876-7, does not extend to the W end, and is of four bays. The principal façade is on the N. Here the aisle has paired lancet windows while the clerestory consists of circular quatrefoil lights. At the NE corner is an octagonal bell-turret, the belfry stage having a slender opening on each face: the turret is capped by a short stone spirelet. The S aisle and S clerestory mirror the N ones in their details. The chancel, facing the main road down a steep slope, has three graded lancets and stout angle buttresses. The W wall of the nave has three graded lancets. These latter are the only windows at the church to have hood-moulds. None of the constituent parts of the building have parapets. Attached to the W end of the nave is a pair of utilitarian sheds under a lean-to roof.

INTERIOR: The nave is tall and is covered by a steeply-pitched arch-braced roof thought to incorporate the original 1840 structure: it has iron tie-rods to add to the rigidity. The walls are plastered and whitened throughout. The arcades are of five bays on the N and four on the S. They have double-chamfered arches (without hoods), circular piers with moulded capitals. These bases differ slightly between N and S reflecting the two building campaigns (moulded on the N but with a simple chamfer to the bases on the S). The chancel arch is very plain and the mouldings of its head die into the responds. The aisle roofs are lean-tos with arched-braces to a purlin while that in the chancel has arch-braces to a collar. The floors seem to offer evidence of the different building campaigns with the red quarry tiles at the E end of the nave probably a survival from the 1840 church; red and black quarries of the 1860s in the S aisle and, in the N aisle, multi-coloured tiles of the 1870s.

PRINCIPAL FIXTURES: Much of the Victorian seating survives: it has square ends and, attached to the two front benches are interesting folding seats which can be supported by iron brackets to increase accommodation temporarily. The pulpit is of stone, has pieced traceried panels and dark marble shafts at the corners. The font is octagonal and has a square bowl set on a quatrefoil marble base. On the N wall of the N aisle are a pair of brass First World War memorial tablets signed by the well-known church furnishing firm of Heaton, Butler and Bayne. The organ is said to have come from the redundant church of St James, Farnham, and to have been built by Hunter in 1877 and enlarged by his firm in 1895. The case, however, bears on its coving the date 1909. There is stained glass in a number of windows ranging in date from the late C19 to 1933 (the latter (S aisle W window) signed by Wm Aikman.

SUBSIDIARY FEATURES: The Leverton Hall to the S, attached to the church by a glazed link: the hall was added in the early 1970s when the village hall was demolished and is named after the Rev. Charles Leverton. It is cheaply built in buff brick, is partly timber clad and has a concrete tile roof. It is said not to be owned by the church but administered by a separate body of trustees and is not of special interest. To the E across the main road is a timber and tiled lychgate leading into the burial ground for the church.

HISTORY: Wrecclesham was well over a mile from the parish church in Farnham and by the early Victorian years there was concern about providing a place for Anglican worship for the district. Much of the outlay was paid for by the Paine family. William Paine, who owned extensive arable land in the area, gave the site (and also the burial ground across the road) while his relative, J M Paine, who owned a quarry at Dippenhall, gave the stone. The new church was completed in 1840 and was consecrated on 15 July of that year, having seating for about 400. The 1840s building is said to have consisted of a nave, chancel and N transept. A W gallery was added shortly afterwards. However, the building we see today is a complete remodelling of the 1860s and 1870s, the result of the need for enlargement and also considerable changes in the desired appearance of churches (the 1840 building would have no doubt had an extremely small chancel which would be unacceptable to mid-Victorian taste). In 1861 (Jackman) or 1862 (Nairn) the chancel was rebuilt and a S aisle added. Then in 1876-7 the W gallery was removed, the nave rebuilt and lengthened, its roof raised and the N aisle and bell-turret built. Despite the piecemeal changes the building does have a fairly coherent sense of unity. Hardly anything of the 1840 building can now be detected but the large red quarry tiles at the E end of the nave are probably remnants of the original flooring. The different treatment of the pier bases is further evidence of the two-phase remodelling while the different flooring schemes, noted under Interior, point to the different building campaigns. The fact that the S aisle stops short of the W end of the nave is an indicator that the nave was originally shorter and was only lengthened after the N aisle was added. The stalls were removed from the chancel in 1977 and resited at the W end of the nave.

REASONS FOR DESIGNATION:
The church of St Peter, Wrecclesham, is designated at Grade II for the following principal reasons:
* It is a mid-Victorian remodelling in the C13 style of a church originally built in 1840 to serve the needs of Anglicans in this area of Farnham, possessing architectural/special interest.
* It has fittings and furnishings, dating mainly from the 1860s and 1870s remodelling, which possess an overall cohesion.