Parish Church of All Hallows 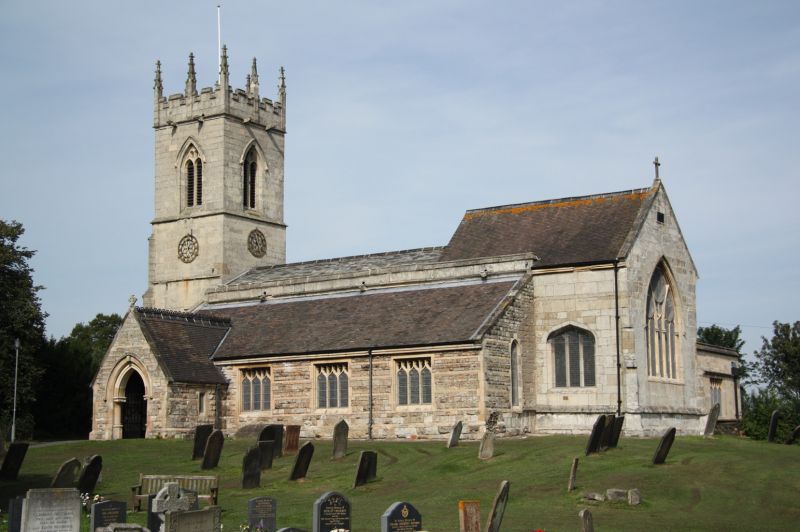 II*
13th century and later nave and chancel, 15th century tower. Much rebuilt in 1877 by T.C Hine of Nottingham.

Exterior: Hine's work, while unmistakably Victorian, follows the forms of the previous work, except in raising the chancel roof high above that of the nave to accommodate a big east window. The tower is short, of three stages with diagonal buttresses. It is perhaps 15th century, though much refaced. The upper parts were repaired after lightning damage in 1823, possibly by Richard Ingleman (who designed Ordsall Rectory in 1819 and was working at St Michael, West Retford, c. 1822-4) and further renewed in 1877. The bell openings are of two lights, with Perp tracery. There is a plain west door with a three-light window above. The lean-to aisles are entirely of 1876-7, with tiled roofs and no parapets. The walls are of rock-faced pinkish stone with bands of creamy ashlar limestone, and the windows square-headed, of three lights. The prominent south porch has short attached columns with foliate capitals, in the E.E. style. The north aisle is similar, but has a plain ashlar vestry at its east end (probably relating to a faculty of 1936). The south wall of the chancel shows most signs of medieval stonework: large irregularly sized ashlar blocks. Here, the south window has three lights under a four-centred arch, late 15th or early 16th century while the big Dec east window is entirely of 1876-7.

Interior: The tall moulded tower arch is perhaps 15th century, as is the four-centred internal doorway to the tower stair turret. The four-bay nave arcades have octagonal piers with moulded capitals, with some nailhead moulding on alternate capitals in the north arcade. On the south, the third pier from east has four shafts attached at the diagonals, and the east and west responds have keeled shafts. The stepped-profile arches have complex mouldings including more keels. All these features suggest the 13th century, though the two arcades may be of different dates. The chancel is rendered and painted, and has a small arch-headed piscina in the south wall.

Principal Fixtures: The pine pews are of 1877, with sloped backs and inverted Y-shape end frames. High altar of oak, Perp style, 1894. In the north chapel is a good 17th century communion table with heavy baluster legs and scrolled frieze. Plain octagonal font of 1877, and another which may be pre-Reformation, of unorthodox inverted ogee form (converted from something else?). The good oak chancel screen is probably late 15th century, with cusped ogee lights, and a dado with similar tracery beneath a frieze of trefoils in circles. The superstructure is coved and rib-vaulted, below a fretted frieze. After several moves it was reinstated in 1939. The best glass includes the East window by Camm Brothers of Smethwick, 1877; two in the chancel, by Powell & Sons (Flint memorial, 1923), and by C.E. Kempe (Hall memorial, 1905). The north aisle east is again by Camm Brothers, 1881. In the south aisle, unusual brass plates to Stephen Coe, 1614, Elizabeth Coe 1653 (larger, decorative); John Johnson, 1680; and the Pigot family, 1727 and 1718. Marble tablet in a leafy frame with cherubs, to Henry Halfhide, 1689, and one to Richard Brownlow, 1706 with swags and a skull, swept pediment with lamps and arms. In the north aisle is a memorial of Nottinghamshire alabaster with kneeling figure between Corinthian columns, c. 1600-20.

Subsidiary Features: The church sits on a bare rise in a very large churchyard, with 18th or early 19th century brick walls to the south, low rubble boundary walls and a simple oak lych gate (south-east). Outside the south porch is a medieval stone (a hollow octagon on a square slab), perhaps from a small font or a column base.

History: The early history is obscure; no church is mentioned in Domesday, and the first recorded rector was in 1277. The tower was repaired after lightning damage in 1823. The church was repewed in 1831. A restoration of 1876-7 by T.C. Hine of Nottingham cost c. £3,500 and included rebuilding most of the aisle walls; a new south porch; restoring walls, floors, roofs, wood and ironwork and the defective south aisle arcade; many new fittings; an organ in the south aisle; and rebuilding the upper tower including new pinnacles and parapet. Fragments of a Norman font and badly burned stonework were found during the work. All Hallows was re-opened on October 31, 1877. Thomas C. Hine (1813-99) was a prolific Nottingham architect who did much commercial and domestic work (often Italianate or Jacobethan) as well as churches. He restored Nottingham Castle with antiquarian sensitivity, 1875-8. Further restoration in 1880 under C. Hodgson Fowler included the third resiting of the rood screen.

Reasons for Designation: The church of All Hallows, Ordsall, East Retford, is designated at Grade II* for the following principal reasons:

* For its Medieval structural survivals, principally the Perp tower and Early English nave arcades with characteristic keeled mouldings and ornament
* Good oak rood screen probably of the late 15th century
* The rest the rest of the church was rebuilt or restored by the pre-eminent Nottingham architect, T.C. Hine, 1876-7, reflecting restoration approaches of that time.
* A small but interesting collection of 17th and 18th century tablets and brasses, and decent Victorian and later glass, including work by Kempe