A Grade II* Listed Building in Milkstone and Deeplish, Rochdale 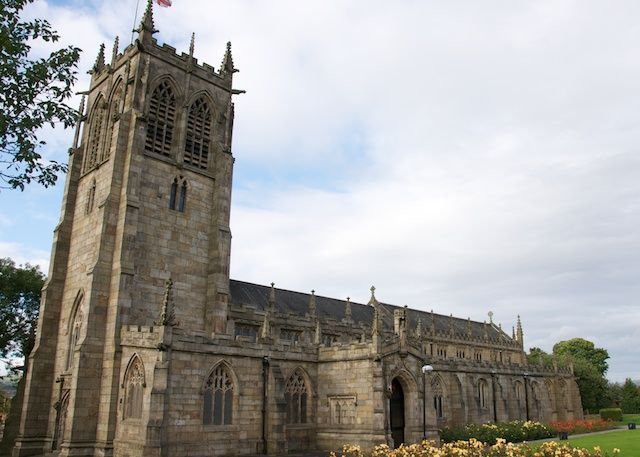 Church. Tower C13 and later, top stage added in 1870. Nave
arcade columns partly C14, arches in south aisle C14,
clerestory 1557, chancel and chapel 1883-8, otherwise of
various Victorian restorations. South aisle, porch and
belfry by W.H. Crossland, chancel and chapels by J.S.
Crowther. Rossendale stone, Yorkshire stone and slate and
copper roofs. Nave with aisles, clerestory, central west
tower and south porch. Chancel with chapels to north and
south. Largely in a Decorated style. Castellated 5-bay nave
and aisle with square headed 3-light cusped windows and 3-
light traceried windows to aisle in mixed style with hood
moulds. Weathered buttresses and crocketed pinnacles.
South porch has diagonal weathered buttresses, grotesque
gargoyles, crocketed pinnacles, statue of St. Chad and
arched opening with heavily enriched ogee shaped surround.
The 3-stage castellated tower has offset angle buttresses
surmounted by carved heads and decorative pinnacles,
elaborate bell-stage, gargoyles and crocketed pinnacles.
The 6-bay castellated chancel has clerestory and side
chapels with square-headed traceried clerestory lights and
3-light, four-centred arches to chapel with Perpendicular
tracery. Buttresses and pinnacles as above but with
grotesque gargoyles. The chancel roof is higher than that
of the nave, the east window is of 6-lights with
Perpendicular tracery. Interior: 6-bay nave arcade with
alternating round and octagonal piers with stiff-leaf and
upright-leaf and headed capitals, and some with broaches at
the springing of the arches. The arches are double
chamfered and the roof of an ornate tie-beam construction.
The chancel is also of 6 bays with clustered columns.
Fittings: plain C14 font, some Perpendicular stalls and
chapel screens, C17 twisted-baluster communion rail in south
chapel. W. Morris west window 1872-4, A.S. Wild, Top
o'th'Steps, 1970 and B.o.E.