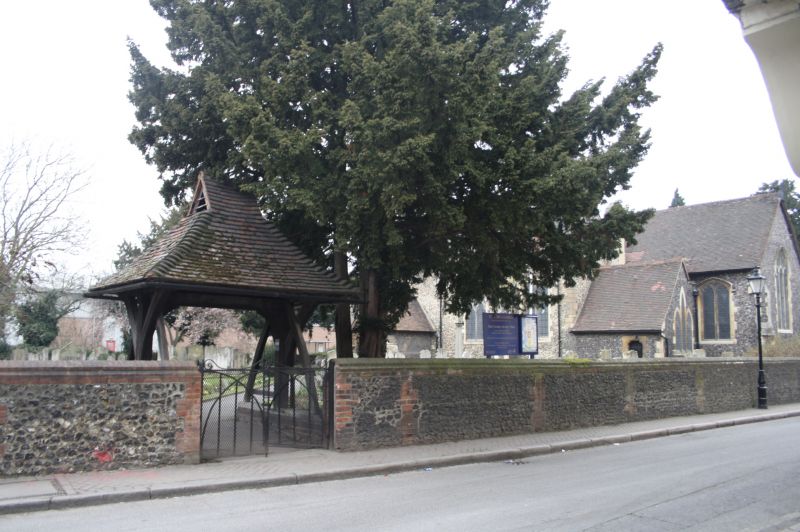 Probably C12 in origin. Early C13 W tower and C13 N and S nave arcades. Aisles rebuilt in the C14, with further work on the chancel in the C15. Early C16 S chapel. Extensively restored, including replacement of S porch and addition of S vestry, by E Nash, 1861-3. Further restoration in 1876 and 1895.

EXTERIOR
The exterior was almost wholly renewed and somewhat altered in the C19, but most of the tracery patterns appear to follow the original designs. The chancel has C15 style windows to S and E, and a C13-style window with plate tracery on the N. There is a small, C19 lean-to vestry on the chancel S side. The S chapel has a plain parapet concealing a low-pitched roof; its window is early C16 in style. The S aisle has a single lancet to the W of the porch, entirely renewed in the C19, and a C14 style window with Kentish cusping to the E of the porch. The S porch is C19, replacing a late or post-medieval porch, and has an Early English style outer opening. The S door is C13 has continuous roll mouldings and a hood mould with head stops. The N aisle and N chapel have C14 style windows, all heavily renewed in the C19. The W window of the N aisle has renewed Kentish cusping. The N door is C14 and has continuous chamfered mouldings and a hood mould. The slender W tower has a shingled broach spire. Undivided, it has substantial C19 buttresses on the lower part, and renewed quatrefoil openings in the bell stage.

INTERIOR
The interior is painted and plastered, and retains much more genuine medieval work than the exterior. The chancel arch is late C13 or early C14 and has two chamfered orders on half-round shafts with moulded capitals. Two bay arcade from the chancel to the N chapel is C19 in an Early English style with a stiff-leaf capital on the central pier and hood moulds with foliate stops. The arches between the aisles and chancel chapels die into the wall. Three bay N and S nave arcades of the early C13 with pointed arches on round piers with moulded capitals. The western and eastern responds on both sides are very long, and the rood stair survives in the long E respond of the S arcade. The early C13 tower arch has chamfered imposts. There is a trefoil headed stoup inside the S door. C19 chancel roof has carved angels and shields along the wall plate.

PRINCIPAL FIXTURES
Trefoil-headed piscina in the S chapel, cinquefoiled piscina in the N chancel chapel. There is a late C15 screen in the S chapel and an early C15 screen under the tower arch. C19 timber pulpit in an unusual square shape, with open Decorated-style arcading and an eagle book rest. C19 font. Mid C19 benches with doors and square ends. C19 choir stalls with arcaded fronts. Late C19 or early C20 timber reredos with carved figures of saints in C16-style niches. One fragment of medieval glass in the S aisle, brought from Westminster Abbey in 1991. A good collection of brasses, including Richard Abery, d.1508 and his three wives, and Philadelphia and Benjamin Greenwood, d. 1747 and 1773, said to be the last pre-Oxford Movement brasses. Also a small hanging monument to Margaret Crewes, d.1602 with kneeling figures.

HISTORY
The earliest visible fabric is the early C13 tower and the C13 arcades, but the long E and W responds on both arcades indicate that they were added to an earlier nave. The aisles were rebuilt in the C14, and the screens are indicative of work on the church in the C15. The S chapel was added or remodelled in the early C16, and the former S porch, which was two storied, may also have been added in the C16. By the C19, the church was in poor condition. It was extensively restored in 1861-3 by E Nash, with subsequent work in 1876 and 1895.

REASONS FOR DESIGNATION
The church of St Mary, Bromley, is designated at Grade II* for the following principal reasons:
* A Medieval parish church of the C13-C16, retaining considerable early fabric (especially internally).
* For the survival of numerous fittings, in particular its C15 screens
* For the quality of its masonry
* For the unusual flint facing, applied during the C19 restoration.