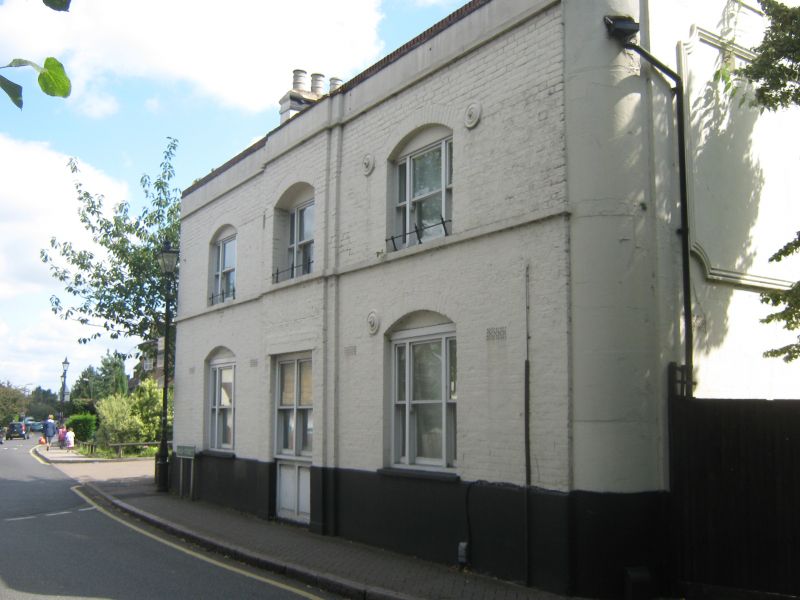 Former public house, being converted into housing at time of survey. Front part late C15, two surviving bays probably of a four bay hall house with chimneystack inserted in C16, refronted in C18 and further modified in later C19 when an L-wing was built at the back. Timberframed building but reclad in brickwork. Slate roof to front range with end chimney stacks and tiled roof to L-wing. Front range of two storeys three windows. Parapet. Cambered openings with late C19 tripartite sashes and central wide doorcase with cornice and brackets. L-wing of one storey and attics with two pedimented dormers. Front range contains two virtually complete bays of a crownpost structure, probably of late C15 date, with one complete truss. The truss has a contemporary filling of lath and plaster to the surviving collars and a contemporary plastered partition directly under the truss. Both of these features retain decoration and exposed timbers have been limewashed with a similar application where exposed. Substantial timberframing survives from the first floor and appears integrated with the wall assembly. The framing is mainly of young oak but surviving principle members are of elm. The crownpost is tall with longitudinal arch braces to the surviving collar purlin only. It has a uniform square section with no visible moulded decoration. Probably during the C16 a brick chimneystack was inserted but this was removed in the C18 when the building was refronted in brick. Empty brace mortice evidence to the collar purlin sugests two missing crown posts. This suggests the house was probably originally of four bays with the two central bays surviving. The hall was probably of one bay, the larger bay to the north. Although there is some evidence for reconstruction within the surviving roof assembly, the lack of evidence for smoke-blackened rafters indicates that the hall may always have been flooresd. Andews, Drury and Herbert's map of St Mary Cray 1769 indicates a structure on the site of the present front range.