Outbuilding to the South East of Birley Hay Farmhouse 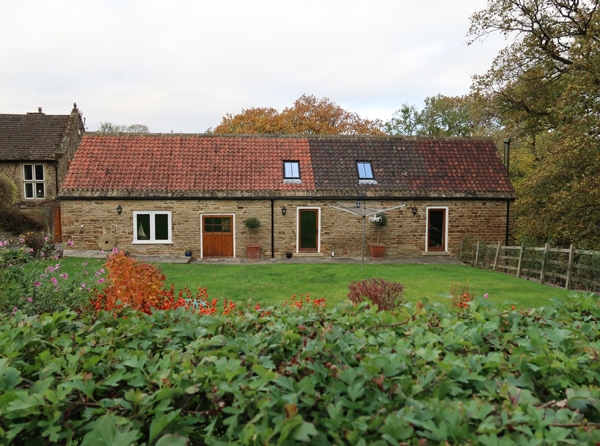 PARISH OF ECKINGTON BIRLEY HAY
SK 38 SE
1/58
Outbuilding to the south-
east of Birley Hay
Farmhouse
GV II
Farm outbuilding. Early C17. Coursed rubble coal measures
sandstone, with quoins, and a pantiled roof with stone slated
eaves. Single storey with overlofts. North elevation. Five
bays, the three bays at the east end advanced, beneath an
extended catslide roof. Plain doorway at east end, two other
double openings without doors in remaining two bays of advanced
section. Remaining two bays with open front, supported by cast
iron column set on former grindstones. Interior. Advanced bays
are formed by creating a short aisle by means of two full height
posts or arcade piers, which carry an arcade plate and which are
braced longitudinally and laterally. The tie beams of the roof
trusses are carried on the jowelled head of the post, and the
tie beam for the advanced section is morticed into the outer
face of the post. The remaining two bays have a cruck truss
supporting a single purlin roof, with wind braces on the
southern side. The truss formerly had a tie beam, now removed,
with a yoke supporting the ridge purlin. This form of advanced
bay construction also exists at Malthouse Farm, Eckington and
Manor Farm Barn, Dronfield.