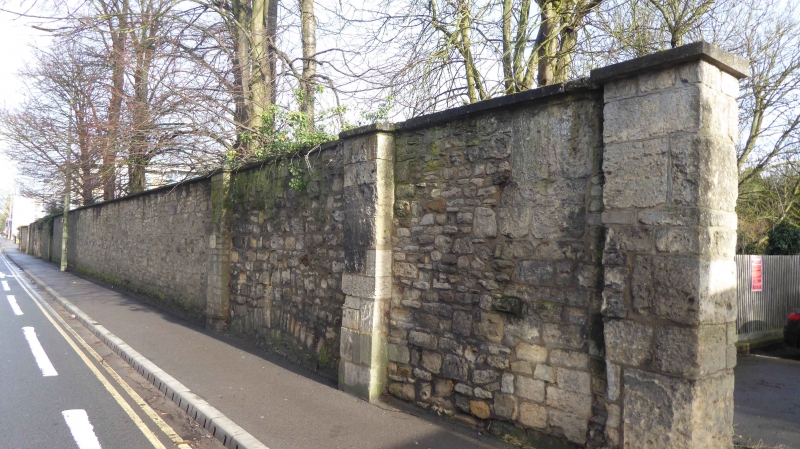 A section of north-south aligned wall, C18 with C19-C20 repairs and capping (part of the rear boundary wall of Grandpont House) which continues along Abingdon Road (east-side). This includes an east-west aligned return wall along the northern bank of Hogsacre Ditch, within the car-park of Holy Rood Roman Catholic Church.

A section of north-south aligned C18 wall with C19-C20 repairs and capping (part of the rear boundary wall of Grandpont House) which continues along Abingdon Road (east-side). This includes an east-west aligned return wall along the northern bank of Hogsacre Ditch, within the car-park of Holy Rood Roman Catholic Church.

The north-south aligned wall comprises of two sections divided by a 2.5m opening from Abingdon Road (east-side) into the car-park of Holy Rood Catholic Church. It forms part of the wall which continues along Abingdon Road to the north towards Folly Bridge. It stands at a height of approximately 4m on both sides of the opening and is constructed of regularly coursed stone of varied detailing and finish with a top layer of stone capping. There are at least four phases of construction and repair visible in the stonework section on the eastern elevation. The earliest phase survives to a height of approximately 2m topped by 1.5m of C19 build above and a third phase comprising of 4 courses, 0.5m high with stone capping. The supporting ends to the wall are probably late C20 and include dressed stone blocks, concrete capping and cement re-pointing in some areas. The wall is supported on the eastern elevation by 0.5m wide stone buttresses. Blocked stone arches are visible within the fabric at ground level on both sections of the wall above water courses. These are outside the Holy Rood Roman Catholic Church car-park boundary.

The return wall stands on the south side of the car park and is aligned east-west, along the northern bank of Hogsacre Ditch. The wall which is 0.5m wide is approximately 7m in length and stands 4m high at its western end, reducing to approximately 2.5m high at its eastern end. The wall is constructed of stone of varied detailing and finish representative of multiple phases of repair and re-build with some re-pointing. There is evidence of a former structure on the western corner of the wall with a blocked brick door-way, window and five holes for timbers of a former roof. The wall is capped in stone. A decayed timber door is visible on the southern elevation which faces Hogsacre Ditch.

The stone wall which fronts Abingdon Road (east-side), located in front of Holy Rood Roman Catholic Church, is an exterior boundary wall formerly associated with the rear of the walled estate of Grandpont House (Grade II*). The List entry for the same alignment of boundary wall which is located closer to Folly Bridge Causeway (Grade II, NHLE 1046595) is named wall of Grandpont House and dates it to the C18 (Grade II, NHLE: 1369699). Although this section of the stone wall at Holy Rood Roman Catholic Church was listed separately in 1972, as an C18/C19 historic stone wall fronting Abingdon Road, it is considered to be a continuation of the same wall, with C19 and C20 repairs and capping. Holy Rood Roman Catholic Church was constructed in the 1960s within an orchard of the former estate of Grandpont House, as indicated on the 1876 and 1938 OS maps. A historic photograph dating to its construction in the 1960s shows the church car-park was previously landscaped with signage attached to the newly re-built ends of the wall opening. A section of east-west aligned wall adjoins the street boundary wall and forms a return within the car-park of the church, along the northern bank of a relict river channel, the Hogsacre Ditch. This river channel is located south of the church and leads to the river Thames. There is evidence of a former structure within the fabric of the wall, which still appears on the modern OS map. The function and date of the structure is unknown. The stone wall continues over the channel along Abingdon Road until it is substituted by a close-board fence.

Grandpont House was built circa 1785 for Sir William Elias Taunton of Freeland Lodge, near Eynsham (1744-1825), who was Clerk of the Peace for Oxfordshire and Town Clerk of the city of Oxford. His eldest son, also Sir William Elias Taunton (1772-1835) was a judge of the Kings Bench. His second eldest son was Thomas Henry Taunton (1775-1831) who also became Clerk of the Peace for Oxfordshire and took over Grandpont House with his family. Taunton's widow lived at Grandpont House until her death in 1867, even though the house and its grounds had been sold to Brasenose College in 1847. The house was then purchased in 1959 by the Netherhall Education Association.

The historic wall is located along the modern line of Abingdon Road, which overlies the archaeological remains and route of the Grandpont or 'Great Bridge' causeway, a scheduled monument which dates back to the Saxon or early Norman period (NHLE: 1007486). The scheduled section of the monument comprises a 500m-long section of the Grandpont Causeway, a series of arches crossing ditches and streams between Folly Bridge and Hinksey Hill, across the Thames floodplain to the south of Oxford. The causeway, which was first constructed of locally sourced limestone and had rubble stone vaults with voussoir and ashlar blocks at the faces of the arches (Preston, 2005, 38), is encased in later widening and revetting. It represents an important element in understanding the layout of early medieval and medieval Oxford. Evidence for the structure has been revealed in recent archaeological investigations along the route from Aldgates and Folly Bridge, along Abingdon Road where it crosses the Eastwyke Stream (OHER 6626; Babtie 2002) and beyond to the Old Abingdon Road crossing the Hinksey Stream east at Redbridge (Preston, 2009).

The wall at Holy Rood Roman Catholic Church, Abingdon Road (east-side), Oxford of C18 with C19-C20 repairs and capping, is listed at Grade II for the following principal reasons:
* Architectural interest: as an imposing, well-designed and largely intact stone boundary wall of C18 date;
* Historic interest: as a well-documented historic boundary wall of considerable interest, part of the C18-C19 Grandpont House estate, with multiple phases of C19 construction and C20 repair; and built overlying the route of the Saxon or early Norman Grandpont causeway;
* Group Value: for its group value with other listed buildings including Grandpont House (Grade II*), the wall of Grandpont House (Grade II), the Folly Bridge Causeway (Grade II) and the scheduled monument of the Grandpont Causeway (scheduled monument).