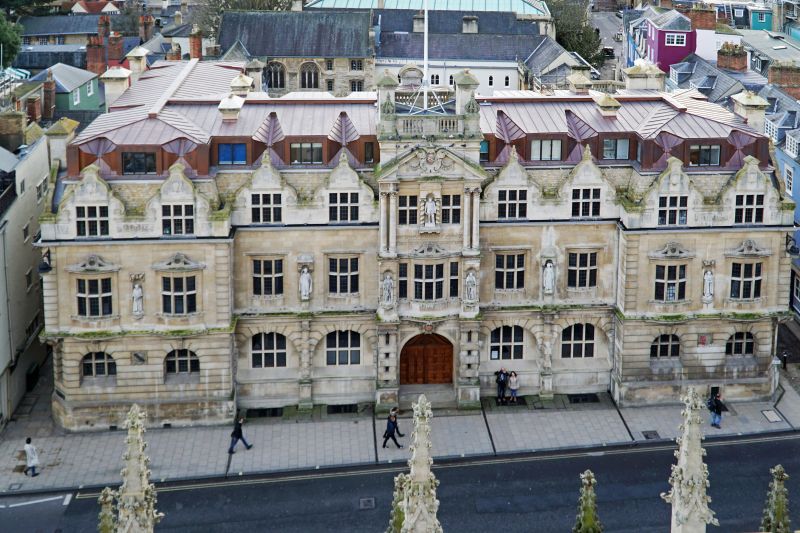 The Rhodes Building forms the north range of St Mary's (or 'the Third') Quadrangle at Oriel College and was built to house undergraduates and Fellows of the college. It was built between 1909 and 1911 to the designs of Basil Champneys (1842-1935) in a bold Jacobethan style and remains largely unaltered except for modifications to the south-east wing in 1981. In 2010 it provides both student and office accommodation.

MATERIALS: The fabric is of load-bearing brickwork, faced throughout in Clipsham and Weldon ashlar.

PLAN: The main range, of three floors over a semi-sunk basement, runs east-west, fronting the south side of the High Street, with short wings returning southwards at each end. A broad passageway (disused) runs between the quadrangle and the street at ground level.

EXTERIOR: The main elevations are those facing the High Street and quadrangle. The High Street front has a central entrance tower, with two windowed bays to each side, flanked by (slightly) projecting two-bay wings. The lower stage is rusticated, with small mullioned windows to the central section in deep-sunk in broad arches, with larger ones to the wings. The arms of Monro, Sir John Holt (Oriel, 1650s), the College, Bishop Robinson (John Robinson, Fellow, 1670s) and Provost Shadwell are displayed at key points. Above a prominent cornice, the first floor has windows to the wings (mullioned, four equal lights), forming subtly-projecting curved bays, with cornices surmounted by Jacobean cartouches with scrolls. Between the windows stand life-size Portland-stone statues by Henry Alfred Pegram (1862-1937) representing (east to west) William Allen, Cardinal (1532-94, Fellow 1550, Principal of St Mary's Hall) Walter Lyhert (Provost 1435-46), Edward VII, George V, John Hals (Provost 1446-49), and Henry Sampson (Provost 1449-76). Above a second cornice, the top floor is lit by mullioned four-light windows in scrolled gables. The tower entrance arch is flanked by paired roman Doric columns. Above, statues of Edward VII and George V stand in rusticated niches flanking shallow-projecting bay window, with cartouche and scrolls above. The level above, flanked by paired, un-fluted Corinthian columns, displays a statue of Rhodes himself, under a shell canopy propped by barley-sugar columns. At his feet a relief inscription reads E[X]: LARGA: MVNIFICENTIA CAECILII:RHODES, ie 'Out of the splendid generosity of Cecil Rhodes', the raised letters (here in bold) forming the laborious chronogram LMVIICICILIID (ie, reshuffled, MDCCCLLVIIIIII, ie 1911). The pediment above is interrupted by Rhodes's posthumously-granted arms (Argent within two bendlets a lion passant gules between two thistles stalked and leaved proper), flanked by cornucopia and swags.

The central and two flanking bays of the south elevation, facing St Mary's Quad, are largely similar to those on the north, although with flat-topped the first-floor windows. The statues here, in niches or under canopies are (west to east) Adam de Brome (Rector of St Mary's, founder of Oriel, d.1332); A.G.Butler (1831-1909, Fellow & Rhodes's tutor), Cardinal Newman (1801-90, Fellow), and Archbishop Arundel (1353-1414, Fellow and benefactor); the Arms of Gilbert White, Edward Hawkins (Provost 1828-82), John Keble and Sir Walter Raleigh appear below. The top stage of the gate tower has paired Corinthian columns flanking a window, beneath which is inscribed INCEPTUM MCMIX ABSOLUTUM MCMX (ie begun 1909, finished 1910) with 'GR' and 'ER' underneath. The pediment frames a statue of the Virgin. At the west end of the main elevation is a stair turret, its windows staggered, rising with the stairs. The stair to the east, by contrast, is concealed deep within the building.

HISTORY: The Rhodes Building owes to the initiative and generosity of Cecil Rhodes, intermittently an Oriel undergraduate between 1873 and 1881, whose £100,000 legacy included £40,000 'for the extension to the High Street of the college buildings': £22,500 was to be for building, the rest to replace income from tenements to be destroyed. At Rhodes' death in March 1902 annexation was still blocked by the life-interest of the Principal of St Mary's Hall, which owned the site, but swiftly followed his death a few months later.

Although later sources hint at an initial preference for the architect Thomas Graham Jackson, the Fellows chose Basil Champneys (1842-1935), whose Jacksonesque work of the 1880s, particularly at New College, had evidently impressed them. The appointment was made well before April 1905, when revised plans were received by the Provost, DB Munro. The contractors, signed up in June 1909, were John Wooldridge and George William Simpson of Frenchay Road, Oxford.

The site of the new building was occupied on the street side by an assortment of re-fronted houses (medieval to C18), with shops beneath, and at the rear largely by the Gothic Principal's house of c.1833, projecting well into the current area of St Mary's Quad. The first scheme, presented as sketches only (lost), would have rebuilt only the street frontage, preserved the Principal's house, included a loggia extending the full width of the central section of the new building, and omitted the gate and tower of the later ones. Following further correspondence, the College was presented with a fully worked-up scheme for which all the drawings survive (scheme 2): in this, the loggia survived in the vestigial form of two arched bays occupying a third of the building's width. The main floors of the east wing and much of the central section, including a five-windowed first-floor 'Gallery' on the street front, were to house the Provost.

In the event, in November 1905, the incoming Provost, CA Shadwell, wished to retain the old Lodgings, which, being at the heart of the college, he felt were better situated. The brief now being rather different, Champneys had been asked by November 1906 to provide a full set of new plans, this time with the proviso that the buildings should be 'architecturally of the character of the original C17 buildings forming the present front quadrangle'. The architect replied with a series of 'Questions for discussion preparatory to new plans for the High Street front', defending his stylistic approach and explaining his aim to realise 'the line which the designer of the original work would have taken had he been called in to meet the new problem'. Shadwell's point-by-point response accepted most of what he said but urged a spending limit of £15,000.

The preliminary design for the third scheme (scheme 3, known only from correspondence), provoked some fundamental criticism. At a special meeting on 2 March 1907 the design was severely criticised, the Dean insisting that 'detailing more in accordance with the style that has become traditional in Oxford, for buildings and for College rooms' was essential to give it a 'good academical character'. The 'style' referred to was Jackson's - the one invented and launched with the building of the Schools (1876-83); it evoked not the Middle Ages but the Renaissance, was championed by the university's reforming tendency, and by 1900 had made its author 'the arbiter of Oxford building'. Subsequent correspondence reveals Champney's dogged reluctance to change his designs, but revisions made by 24 April 1907 resulted in the version (scheme 4) eventually signed off by the General Purposes Committee on 23 June 1909. As can be seen, Champney's stylistic concessions were impressively limited. Work must have begun in the summer of 1909, although demolition probably started in the previous year.

Whatever the actual merits of the design, Champneys' intransigence ensured the building a frosty reception from his clients: already reviled on the drawing board, anticipated with foreboding whilst in progress, it was ridiculed on completion. The Oriel Record for March 1910, includes a frontispiece of the street façade and calls it a 'compromise', as did the college Treasurer, also in print; the Record of September 1911 comments that 'The New Buildings are now a fait accompli, and all that remains is to get accustomed to them'. Other critcisms followed, but Evelyn Waugh trumped them all in 1930, suggesting that 'a very small expenditure on dynamite should be enough to rid us forever of... the High Street front of Oriel..' Later commentators, though, including Pevsner and Sherwood (the Buildings of England volume for Oxford (1974)), have been more generous. As a memorial to Rhodes, however, the building was deemed more successful. Shadwell's inauguration speech described it as 'one of the monuments of his splendid generosity to Oriel... [which] ...will stand as the visible monument of the generosity and loyalty of Cecil Rhodes'. By the 1920s the building was being termed the 'Rhodes Building', not, as had at the opening, the 'New Buildings'.

REASONS FOR DESIGNATION: The Rhodes Building at Oriel College Oxford was built 1908-11 to the designs of Basil Champneys, and is listed at Grade II* for the following principal reasons:
* Work of major architect: as a design of a significant C19 and C20 architect whose work is now increasingly appreciated
* Architectural: the building makes an important, bold, impressive and successful contribution to the interest and variety of the High Street frontages. It represents a new departure in the architect's style, has features of originality and distinction, and was both his last major work and Oxford's last building in this style
* Sculptural: the building has an integral and impressive collection of Portland stone sculptural elements and statues, including kings, major figures associated with Oriel and Rhodes himself, all of artistic quality and historical significance to the building
* Plan: the internal layout of the building and the inclusion of plumbed sanitary facilities in the basement represent innovations in collegiate architecture and amenity
* Intactness: internally and externally the building remains substantially as built
* Historic interest: the Rhodes Building, adorned with his statue in pride of place, serves as a major monument to Rhodes, a controversial figure, but of immense historical importance and whose legacies had a major impact on the University.