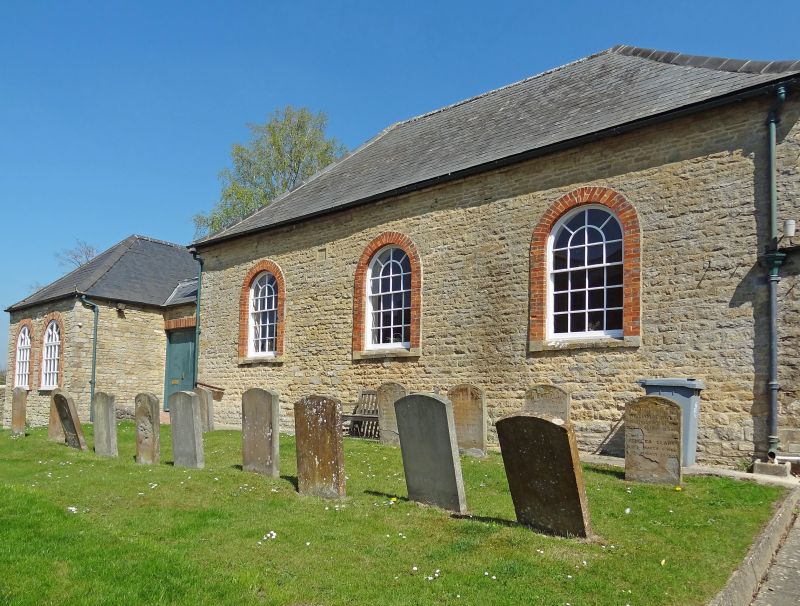 Quaker meeting house, built in 1779. Lean-to extension added around 1860, replaced by a larger extension in 1990-1 to designs by Robert Franklin of Oxford.

Quaker meeting house, built in 1779. Lean-to extension added around 1860, replaced by a larger extension in 1990-1 to designs by Robert Franklin of Oxford.

MATERIALS: coursed stone rubble with red brick dressings and a state roof (replacing the original covering of stone tiles as seen in an undated, but probably late-C19, photograph).

PLAN: the main meeting house is single-storey and rectangular in plan with a hipped roof, orientated north-west to south-east along Market Street. Access is via an entrance in the 1990s extension at the north-west end of the building. This projects forward from the line of the original building. Internally, the 1990s extension comprises a kitchen, WCs, small meeting room and entrance lobby. This leads on to the original interior, divided by a pine partition into a smaller women’s business meeting room (now a library) at the north-west and the main meeting room to the south-east. At the south-east end of the building is a boiler room with a lower hipped-roof, probably added around 1861. An arched opening from this to the main meeting room was introduced in 1990-1.

EXTERIOR: the front (south-west) elevation of the original meeting house has three equally-spaced round-arched windows with red brick dressings, chamfered stone sills and timber sash windows with glazing bars. The outline of the entrance introduced around 1860 and blocked in 1990-1 is visible between the first and second windows. Above this is a date stone inscribed ‘AD 1779’ and below an inset cast-iron boot scraper.

The rear (north-east) elevation has a single window at the eastern end which was probably inserted during the 1861 alterations. It has a large square-headed opening with a timber multi-pane window and stone lintel and sill. The rest of the elevation is blind and obscured by the adjoining neighbouring property.

The stone-built south-east extension is covered to the front by a pitched roof and rear by a sloping roof, suggesting two separate builds. The south-east elevation is blind with the return to the south-west elevation having a pair of timber batten doors.

The north-west extension is also of coursed stone rubble with a hipped slate roof, designed in a complimentary manner with a pair of windows on the projecting south-west elevation. These are of a similar design to those of the original building but have top-hung casements with timber sills. Between them is a date stone bearing the date ‘1991’. The main entrance is set flush with the original elevation and has timber double-doors with a lintel of red brick laid in a soldier course. It is reached via a red tile-covered, concrete ramp with a stone facing. The north-west return has a side entrance with a six-light glazed panel door in a square-headed red brick surround and a six-pane top hung timber casement in a matching surround.

INTERIOR: the main meeting room has a steeply coved plaster ceiling (above which the original king-post roof is understood to survive) with a central decorative cast-iron ventilator. The meeting room has lost its original elders’ stand at the south-east end which has a doorway with an exposed rubble stone segmental arch inserted in 1990-1. The pine match-board dado panelling around the perimeter of the room (raised at the south-east end) and boarded floors are modern.

The main meeting room is divided from the smaller former women’s business meeting room (which has a lower conventional plaster ceiling) by a partition with a removable, unpainted pine-panelled screen, probably of 1860s date but possibly C18.

Fox asserted that no one place was holier than another, and in their early days, the new congregations often met for silent worship at outdoor locations; the use of members' houses, barns, and other secular premises followed. Persecution of non-Conformists proliferated in the period, with Quakers suffering disproportionately. The Quaker Act of 1662, and the Conventicle Act of 1664, forbade their meetings, though they continued in defiance, and a number of meeting houses date from this early period. Broad Campden, Gloucestershire, came into Quaker use in 1663 and is the earliest meeting house in Britain, and that at Hertford, 1670, is the oldest to be purpose built. The Act of Toleration, passed in 1689, was one of several steps towards freedom of worship outside the established church, and thereafter meeting houses began to make their mark on the landscape. Throughout the C18 and early C19 many new meeting houses were built, or earlier buildings remodelled, with ‘polite’, Classically-informed designs appearing, reflecting architectural trends more widely. However, the buildings were generally of modest size and with minimal ornament, although examples in urban settings tended to be more architecturally ambitious.

Quaker meeting houses are generally characterised by simplicity of design, both externally and internally, reflecting the form of worship they were designed to accommodate. The earliest purpose-built meeting houses were built by local craftsmen following regional traditions and were on a domestic scale, frequently resembling vernacular houses; at the same time, a number of older buildings were converted to Quaker use. From the first, most meeting houses shared certain characteristics, containing a well-lit meeting hall with a simple arrangement of seating facing a raised stand for the minsters and elders. Where possible, a meeting house would provide separate accommodation for the women’s business meetings, and early meeting houses may retain a timber screen, allowing the separation (and combination) of spaces for business and worship. In general, the meeting house will have little or no decoration or enrichment, with joinery frequently left unpainted.

A small meeting house was built in Charlbury, on the present site in Market Street, in 1681, on land given by Thomas Gilkes of Sibford. This was replaced by the present building and burial ground in 1779 with ‘the stones and mortar of the old building being used in the new’. The cost was £191. The entrance was originally on the north elevation, as shown in a drawing of the building from around 1800. From 1856 Quarterly Meeting met each summer at Charlbury, for which purpose various alterations were made in about 1860, including a lean-to addition on the north side and a new main entrance between two of the windows on the front (west) elevation. A stone panel bearing the date ‘AD 1779’ was set or reset over the new entrance. External window shutters shown on the drawing of 1800 may have been removed at this time. Inside, a shuttered partition was introduced, or perhaps more likely, reused from the old building.

The meeting was discontinued in 1957, and the building was eventually let as an office to an architect. It returned to Quaker use in 1987, when internal alterations included the removal of the elders’ stand. In 1990-1 a new extension was built on the north side, replacing that of 1860, from designs by Robert Franklin of Oxford. This provided a new entrance lobby, kitchen and WCs and a small meeting room. The 1860 door on the west elevation was removed, but the date stone remains. In front of the meeting house is a burial ground with a number of headstones. The surrounding dry stone boundary and retaining walls were rebuilt in the C21.

Charlbury Quaker Meeting House, built in 1779, is listed at Grade II for the following principal reasons:

* as a well-preserved, late-C18 meeting house, typical of the vernacular architectural associated with the Quaker movement and embodying its modest simplicity;

* for the light it throws, by virtue of its modest architectural style but relatively prominent location within the town, on the history of Quaker and other Nonconformist congregations;

* for its association with the adjoining contemporary burial ground.

* with a number of Grade II listed buildings on Market Street.