A Grade I Listed Building in Carlton Scroop, Lincolnshire 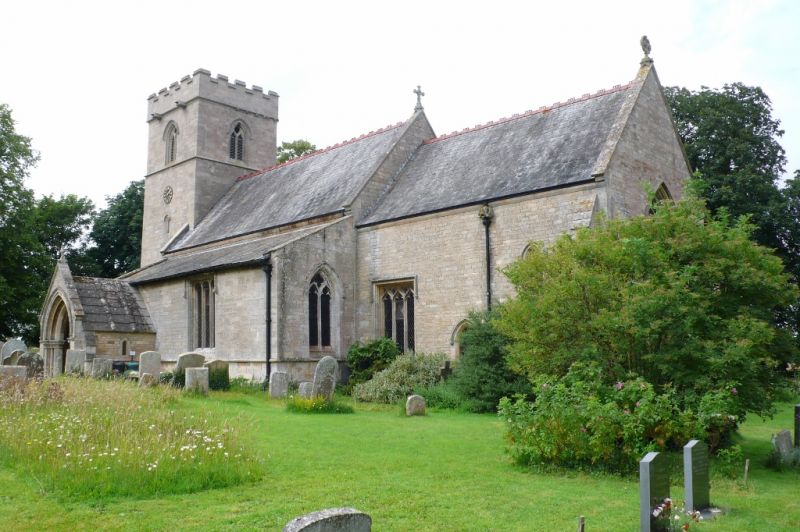 Find accommodation in
Hough on the Hill

Parish Church. C12, C13, C14, C15, C16, C17, C19. Coursed limestone
rubble, ashlar, slate roofs. West tower, nave, north and south aisles,
south porch, chancel, vestry. West tower of three stages, lowest stage
is C12 of coursed limestone rubble with contemporary ashlar clasping
pilaster buttresses. C12 round headed window in the west wall. Upper
stages are of ashlar with re-used C14 windows, one with a pointed head in the
west side of the middle stage and a single trefoil headed light to the south.
The belfry stage has paired ogee headed C14 lights with quatrefoils, but the
one on the north is a C17 copy of a C13 double opening. Castellated top
is dated 1632 on the south parapet, and that is probably the date of the two
topmost stages. North aisle hasps blocked C12 door with a chamfered head
and drip mould. In the east and west walls are double C14 lights matching
those in the tower. In the north wall is a C15 triple light with C19
ogee headed tracery and flat drip mould with human headed label stops.

C19 vestry against north wall of the-chancel, one simple C13 window to the
west of it. All the north side in good C19 dressed limestone rubble
apart from the lower parts of the chancel which are of coursed rubble. The
chancel east wall has a fine C14 4 light window with developed Y tracery
with ogee headed lights beneath a moulded hood mould with foliate label
stops. South chancel wall substantially rebuilt in C19 with a recut
C13 door and window as well as a recut three light ogee headed C15
window with quatrefoils beneath a flat hood mould, the lower parts of
which are original. The south aisle east wall has paired lights matching
those in the tower. South wall of aisle is in ashlar with a three
light C15 window with cusped trefoil heads and flat hood mould, a rather
earlier type than the other triple lights, with human headed label stops
to the hood mould. South porch is basically C13 with a fine ribbed stone
roof, 4 ribs internally. Outer arch under a hood mould with human
headed label stops is finely and deeply moulded with faceted jambs and
two nook shafts to the outer jambs with chamfered inner arch, surmounted
by coped gable with cross. Low side benches, paired C13 side lights.
But in addition to evidence of C19 restoration, there is a date of 1616
in the gable of the porch, suggesting a restoration or reconstruction then
too, and the roof with its imitation stone Roman tiles might be of that
date.
Interior; nave has north and south arcades of two bays with matching
octagonal piers, the arches have simple double chamfers. C12 tower arch
is massive and of four orders; three steps and a single half roll on the
underside. The capitals are either recut or of an unfinished floral
design. Hood mould is reeded on the outer face and has later looking
quatrefoils on the underside, human headed label stops, with a further
projecting head over the keystone. C15 four centred doorway to the rood
loft from the north aisle, C13 piscina in the south wall of the same
aisle. C13 chancel arch, capitals are octagonal, double chamfered arch.
South aisle has C14 piscina in the south wall with cusped trefoil
head, 2 C14 statue niches in the east wall. C19 glass in the east window
of the aisle and in the west a First World War commemorative window.
Both aisles have C16 roofs with moulded principal timbers. The chancel
was apparently shortened because there is a C13 double piscina on the
south side which is now partly concealed by the south end of the east wall.
The piscinaehave auflat lintel over supported by a single octagonal
shaft with a floriate capital, fluted basins. Sedilia to west of
piscina with low arched head, C19 aumbry in north wall. East window
has fine C14 glass in upper parts, partly brought from elsewhere. Two
panels show the donor and his wife, who is unusually dressed as a nun,
presenting a shield of arms to Christ in Majesty. The lower panels
have at the centre a coat of arms. 4 floriate trefoils and abstract
and panelled patterns. C19 arch to vestry in the north wall. Cl7 oak
pulpit with panelled sides decorated with half paterae, standing on
an arcaded base with turned pendents. C14 font on a square base with
stop chamfers, an octagonal bowl with richly traceried windows in each
panel. Easternmost pair of pews in the north aisle are crude late
C15 poppyheads, 7 others are C16 with plain shouldered ends with rolled
taps.
Monuments; good black marble tombstone dated 1699 beneath south aisle
altar and three spirited though barbarous early C18 wall tablets with an
urn, Death's Head, Cherubs and pyramidal pinnacles, all in the south
aisle. Marble wall plaque on north wall of north aisle to John Peachell,
Gent., d. 1727, with open pediment, urns and floriated cartouche
containing painted arms.