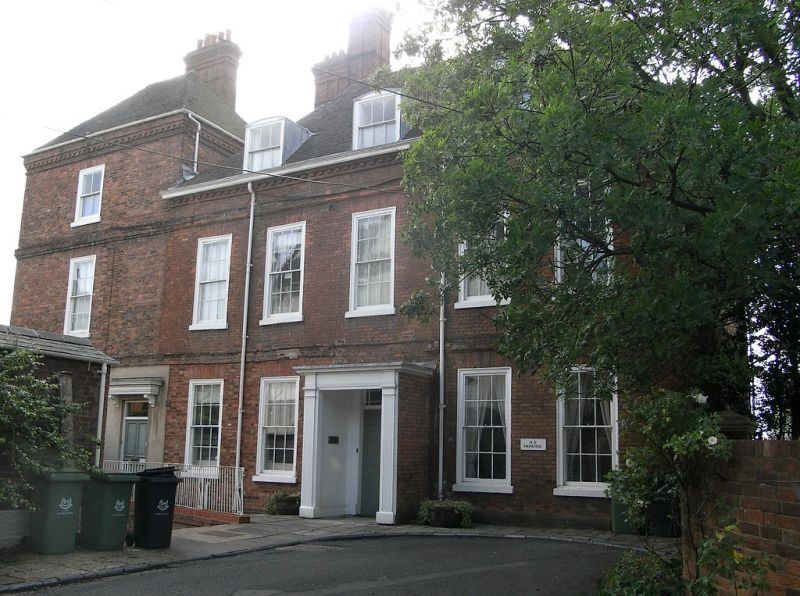 Entry Name: The Deanery (No 10) and Office (10A) with Attached Walls

Also known as: The Ovens.
House, now Deanery and office, with attached walls. c1700,
with earlier origins, extended c1870 to left and rear. Built
onto part of C13 remains of Worcester Castle; later additions
and alterations including extensions and c1870 range at left
for Canon Alfred Barry by AE Perkins. Main range of red brick
in Flemish bond with pinkish-brown brick to left; stone sills;
hipped plain tile roofs and tall brick stacks, banded and with
stepped oversailing courses and pots, the main range has
lateral and rear stacks, the left range has rear stack.
PLAN: double depth to main range with central stairhall; the
ground level at rear is much lower, but this is occupied by
Castle remains which are visible only from the rear. 2 storeys
plus attic, 5 first-floor windows with range to left of 3
storeys, 1 first-floor window. Main range has moulded plinth.
Continuous first-floor band, moulded at right. Mainly 6/6
sashes throughout in flush frames and with flat arches of
gauged brick and sills. To second floor at left a 2/2 sash.
Crowning modillion eaves. Main range has 3 box dormers with
3/3 sashes. Entrances: main range has central entrance a
6-panel door, the lower panels flush beaded, the upper panels
raised and fielded, within plain architrave and with overlight
with margin-lights; within projecting porch with tooled
pilasters, frieze and cornice. Left range has off-centre right
entrance a 4-raised-and-fielded-panel door with overlight and
hood on corbel brackets. Rear raised on 5-bay blind arcade of
coursed stone said to be part of Worcester Castle. The
segmental arches probably date from the building of the
terrace in the early C18, the wall having formed a revetment
to a former medieval structure. Some tall 2/4 sashes, 6/6 and
9/9 sashes.
INTERIOR: stone flagged floor to hallway. Dogleg staircase to
full height has closed string and moulded ramped
handrail; from ground to first floor are substantial
barleytwist-on-vase balusters, then rod-on-bobbin balusters, 2
per tread. 2-raised-and-fielded panel doors in panelled
reveals. Ground floor: front room to right has marble
fireplace and cast-iron Victorian grate; late Victorian
fireplace at rear; further Neo-classical Revival fireplace.
Four 8-raised-and-fielded-panel doors. To first floor the
front room has fitted cupboard with S- and H-hinges and doors
made from probably C17 panelling. Some 4-panel doors, some
moulded cornices; Regency marble fireplace. Shutters to some
windows. Stone-walled basement includes fine late C16 ovolo
moulded door surround with urn stops. Basement has stone
walling and C18 brick vaulting.
SUBSIDIARY FEATURES: kitchen garden wall and front boundary
wall at left, approximately 3 metres high. The coped stone
walls which flank the rear garden are late medieval in date,
and comprise part of the wall listed under Kleve Walk (qv,
item 697).
HISTORICAL NOTE: Knowles notes that the whole of the south
side of College Green had been service buildings to the
medieval monastery, and that it is probable that this dwelling
occupies the site of the bakehouse. By 1820 the Dean and
Chapter had let it to Elizabeth Marriott, then to Henry Grape.
c1821-1870 it was sub-let to Frances Maria Kilvert. In 1870 it
was enlarged for Canon Alfred Barry (son of the architect
Charles Barry) who borrowed money from Queen Anne's Bounty;
the cathedral architect, A E Perkins carried out the work.
All the listed buildings in College Green are part of a
significant group forming the setting for Worcester Cathedral
(qv) to the north side. (The Buildings of England: Pevsner N:
Worcestershire: Harmondsworth: 1968-1985: 316; Knowles JM:
College Green: Worcester. 1800-1900.: Worcester: 1995-: 22-3).