'Unicorn' with Entrance to Crowngate Centre 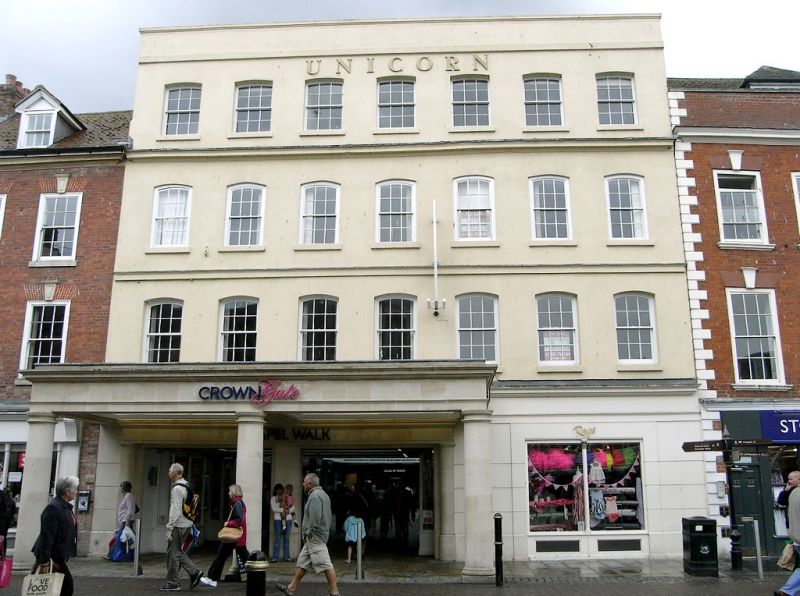 Hotel, now shops and offices, also forming entrance to Crowngate
Centre. c1830 with later additions and alterations including
those c1980s. Stucco over brick with concealed roof. 4 storeys, 7
first-floor windows. First, second and third floors have 6/6
cambered-arched sashes in near-flush frames. Cornice over first
floor; second-floor band; cornice over second floor; crowning
frieze and low, coped parapet. Ground floor has horizontal
rustication and central tristyle Doric portico with entablature
(occupying former carriage entrance) giving access to shopping
centre. To either side a replacement plate-glass shop front.
INTERIOR: in rear part to right of passageway an open newel
staircase to full height with rod-on-vase balusters, shaped
handrail and carved tread ends. First floor room at front retains
2 transverse beams with roll-moulding and moulded cornices. Other
rooms to first floor retain fluted cornices.
HISTORICAL NOTE: known as The Unicorn Hotel, this was one of the
principal coaching inns of Georgian Worcester, others include the
former Crown Hotel (Nos 10 and 10A with Crown Passage including
Crown Inn) and The Star Hotel, Foregate Street (qqv). The Unicorn
Hotel was built over the northern line of Worcester's Saxon town
defences, revealed in excavations of 1989. Hughes states that,'by
the sixteenth century, Broad Street was second only to High
Street in commercial importance. On the direct route through the
city from the (Worcester) Bridge (qv), it contained the business
premises of a number of important traders and at least two inns'.