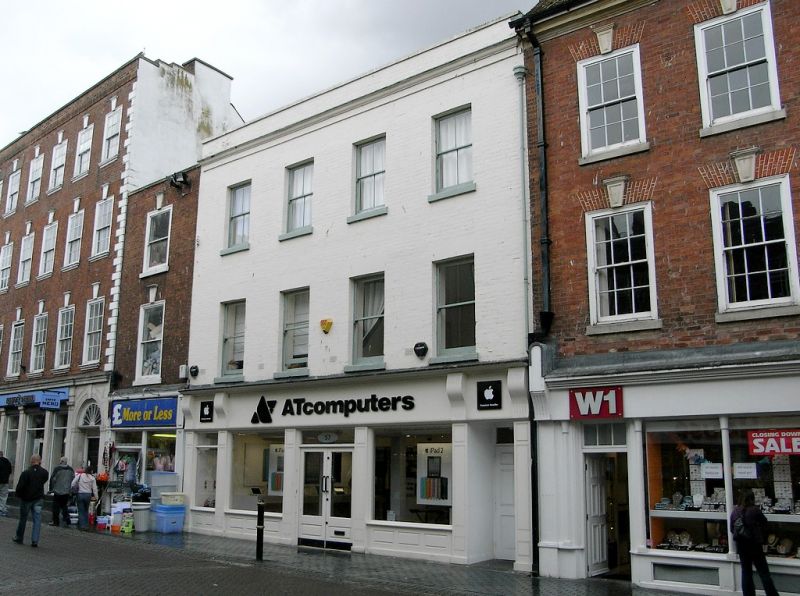 Originally an inn, now shop with office over. Facade c1800 with
earlier origins pre-1560 and with later additions and alterations
including ground-floor shop front c1970s. Stucco over brick with
concealed roof. 3 storeys, 4 first-floor windows. First floor has
1/1 horned sashes; second floor has 2/2 horned sashes; all in
plain reveals and with sills. Crowning frieze, cornice and
low-coped parapet. Ground floor has continuous glazed shop front
with off-centre left glazed entrance; further entrance at right a
renewed glazed door.
INTERIOR: ground floor altered, otherwise not inspected.
HISTORICAL NOTE: in 1560 wealthy merchant Robert Yowle, the owner
of this property, then known as the Antelope Inn, left it and
other property in his will to the city of Worcester to set up a
fund for poor relief. In 1562 and 1574 extensive work was carried
out, and an extension added in 1578. Hughes notes that 'behind
the present .. facade lie the remains of this earlier structure.
The store room .. contains .. roof trusses of clasped purlin
construction and a further timber framed range runs along the
east of the yard behind.'Further, 'By the sixteenth century,
Broad Street was second only to High Street in commercial
importance. On the direct route through the city from the
(Worcester) Bridge (qv), it contained the business premises of a
number of important traders and at least two inns. One of these
was on the site of No.57.' Several other houses on Broad Street
are known to have C17 and earlier origins (Nos 32, 40 and 41
(qqv).