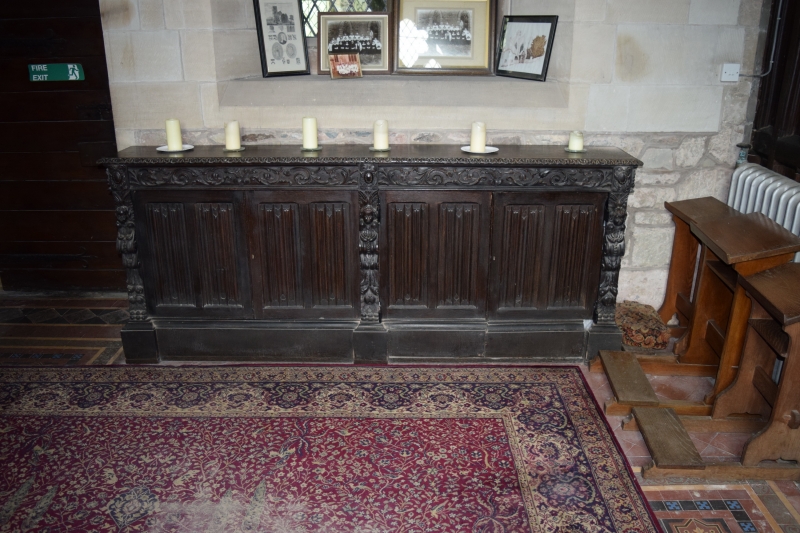 INTERIOR: nave arcades have double-chamfered arches on octagonal piers.
North arcade, of five bays, has shorter arches and capitals of different design to
those of taller 3-bay south arcade. C19 roofs, the nave with C19 clerestory of
2-light traceried dormer windows. Aisles each have a piscina, that to south
with cusped ogee arch. Tower has lancet windows to lower and middle stages of
west wall, and heavy double-chamfered arch to nave. Similar chancel arch with
piscina and sedilia. FITTINGS; restored circular C12 font with frieze of
diagonally crossed squares, in baptistery surrounded by traceried wooden screens
of 1929. More traceried wooden screens at east end of north aisle, much
restored but with some C15-C16 fragments. Chancel screens of similar date were
brought from Colston Bassett, Notts, in 1894. Good pulpit of 1613 with carved
arcaded panels, brought from Shefford, Berks 1897. Chair dated 1W 1655. Late
C19-C20 glass.
MONUMENTS: to Mary Dawson 1779, in form of large white marble urn with flame
finial and draped inscriptions, on marble pedestal with panels commemorating
children. Other marble wall tablets, including one to Abigail Smith 1695.