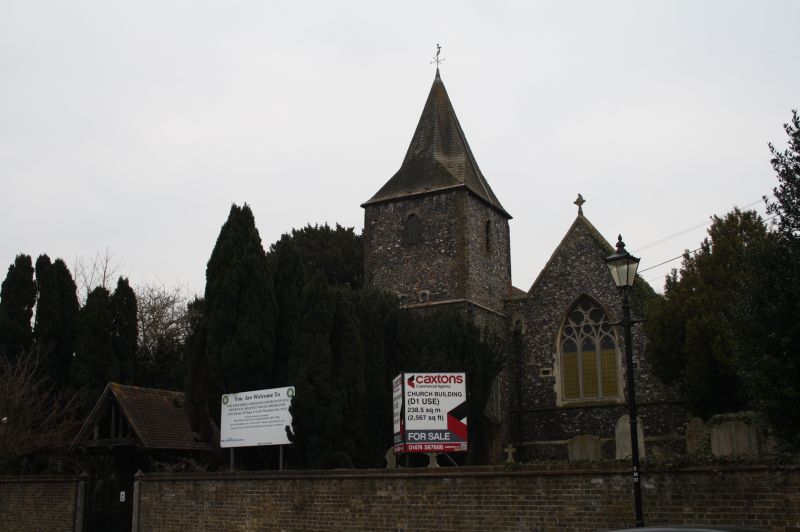 PLAN
Nave with S aisle and evidence for a former N aisle, chancel with N and S chapels, W tower

EXTERIOR
Externally, the church is notable for the clearly visible evidence for its development. In the N nave wall is the remains of a small C11 window, cut by the former N arcade, with the head turned in brick. Blocked, pointed arches, in the N nave wall are evidence for the former two-bay N aisle, probably of c1200. C15 windows of two lights with square heads and two trefoiled lights are inset into the blocking of the arches, and there is a small lancet to the E of the arcade. An early C12 blocked round arch in the W wall of the N chapel is the remains of a former aisle or porticus chapel that was subsequently incorporated into the N aisle and then demolished with it. The NE quoin of the N chapel is made of Roman tile, and the E gable has irregular stone banding and brick along the gable edges.

The NW corner of the nave has a brick quoin, probably late C17 and contemporary with those on the tower. The S aisle W window has late C13-style Geometric tracery, heavily or entirely renewed in the C19. The S windows, also mostly C19, are C15 in style with two lights in square heads. The N chancel chapel has a C19 plate tracery window of two lights with a quatrefoil in the head. The C19 S chancel chapel has Early English-style windows. The chancel E window is C16 in style and has a very depressed head with three uncusped lights.

Two stage W tower with a shingled broach spire, the lower part c1200, the upper part rebuilt or restored in the late C17. C17 brick buttresses on the lower stage and C17 quoins on the upper stage, with a stone string course separating the stages. The W door has a moulded arch with dogtooth ornament on nook shafts with foliate capitals. Above the W door is a window of uncertain date with a C19 plate tracery insert, and there are two small, round openings in the lower part of the second stage. There are narrow lancets in the N and S walls of the lower stage, and late C17 round headed windows with brick dressings in the upper stage.

INTERIOR
The interior is notable for the three-bay S arcade, which is in two distinct parts, both with round piers and pointed arches. The eastern bay is late C12 and has a flattened roll on the soffit of the arch and lively capitals with acanthus leaves and carved heads. The western two bays have a chamfer on the inner arch moulding and moulded capitals to the pier and W respond. The S chapel was added in 1863, and the arch between the aisle and the S chapel and from the S chapel to the chancel have C19 Early English-style foliate capitals on polygonal responds; the Early English style arch into the N chapel is similar. The two bay former N arcade, still visible internally, was added c1200 and was similar to the western bays of the S arcade. It was set in the western part of the nave wall, presumably to accommodate the lost or covered over opening to the former N chapel. The head of a blocked C11 window is visible above the former arcade at the E end, and the narrow rood loft door opens internally above the E end of the S arcade. There is no chancel arch. The chancel S windows have hood moulds, and the remains of a triplet of lancets are visible in the E wall. The tower arch is also c1200; above it is a two-light C15 style opening. The nave roof was damaged in a fire in 1968, but retains some late-medieval timber.

PRINCIPAL FIXTURES
There is a C13 coffin lid with a foliated cross in the S chapel, and one late C19 monument. There are no other historic fittings of note remaining in the church.

HISTORY
The dedication to St Paulinus, a C7 bishop of Rochester, is rare. A church is mentioned in the Doomsday book of 1086, and the present structure was built in the C11. In its original form it appears to have comprised a nave and short chancel with a N porticus chapel flanking the chancel. In the early C12 a N nave chapel was added to the W end of the N chancel porticus, the arch into which is still visible externally. The eastern bay of the S aisle was added in the late C12 and a few years later c1200 the remaining two bays of the S aisle were added. A two bay N aisle which incorporated or continued the N nave chapel was added at this time, and the W tower is also late C12 or early C13. The chancel was extended eastwards in the C13. The chancel arch was removed at an unknown, presumably medieval date, and the aisle windows were redone in the late C15; probably also at this time the S aisle was widened. The top of the tower was remodelled and buttresses added in the C17, and perhaps also at this time the N aisle was demolished, the arches blocked, and the former aisle windows reset in the blocking. The church was restored in 1859-61, and the S chapel was added in 1863. There was further work after a fire in 1968, and a C13 stiff-leaf capital is said to have been found during the restoration. The church became redundant in the late 1970s and has been stripped of its furnishings. The former font, a polygonal example of the C15, is now in St Martin, Chelsfield (Bromley, GL), and the good C19 lectern with a pelican in her piety is in St Mary, St Mary Cray (Bromley, GL).

REASONS FOR DESIGNATION
The church of St Paulinus, St Paul's Cray, Bromley, is designated at Grade II* for the following principal reasons:
* Originally an C11 parish church, now redundant, comprising nave, chancel and N porticus chapel, retaining considerable archaeological potential for further analysis.
* Of special interest for evidence of its medieval development.
* Of considerable historic interest for its antiquity, and for its group value at the heart of the original settlement.