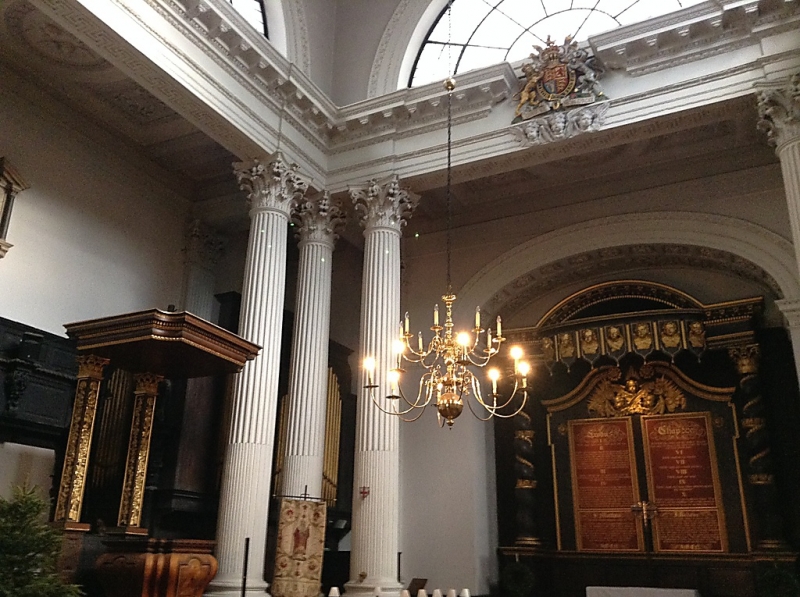 GV I
This list entry has been amended as part of the Bicentenary commemorations of the 1807 Abolition Act.

Church, 1716-1727, by Nicholas Hawksmoor, assisted by John James. The chief mason was Thomas Dunn. Interior altered 1875-6 by William Butterfield. In 1897-8 Bank Underground station was built beneath the church; the entrance (now out of use) by Sidney R. J. Smith is attached to the south façade.

EXTERIOR: Portland stone. Square body, the west façade featuring a projecting central bay with banded rustication, the cylindrical Tuscan columns at the angles banded with the same rustication. Round-headed doorway with semi-circular window above; the window repeated on each side at clerestory level. Broad shallow tower: the base with three unmoulded square windows; the principal storey of three bays with engaged Composite columns, surmounted by two square turrets with balustrades. Low doorways flanking the tower give access to the galleries. North elevation has five low blind apertures with heavy keystones on which sit smaller apertures, also blind. Above three of these apertures (east, centre, and west) are complex aedicules placed within large round-headed rusticated frames: columns set diagonally support a straight entablature curving back; these in their turn frame niches containing a second arch, springing from the column bases, and above this a blank panel. The treatment of this elevation has been described by John Summerson as 'a piece of sheer architectural eloquence hard to match' (Georgian London, 1945). The absence of windows on this wall insulated the interior from the noise of Lombard Street. The lower part of the south elevation is now masked by the single-storey former Underground station entrance (with new vestry), in a style which pays tribute to Hawksmoor. This elevation has five bays, of which only the westernmost is now visible to full height: a low aperture corresponds to those on the north elevation; above is a tall round-headed recess containing a framed blind opening surmounted by a round-headed window (this window is also blind; the windows of the other four bays light the church).

INTERIOR: Square high space supported at each corner by three Corinthian columns, and lit by the large semi-circular windows above a straight entablature. Rich plasterwork by Chrysostom Wilkins, incorporating palm fronds and cherubs. Square ambulatory, formerly with galleries reached by doors in the west angles. The galleries were made by John Meard and carved by Thomas Darby and Gervase Smith; they were taken down by Butterfield, who set their fronts against the walls. In the shallow chancel an ornate wooden baldacchino with twisted columns and canopy ornamented with gilded cherubs, made by Meard and carved by Gabriel Appleby; Butterfield's raising of the chancel forced the baldacchino high into the elliptical chancel arch. The polychromatic flooring of the chancel dates from 1875-6. Original west organ gallery with organ case dated 1681; a second organ of 1913 is placed at east end of north aisle. Pulpit of bulging form, made by Darby and Smith and inlaid with sunbursts by Appleby, the tester echoing the shape of the ceiling. Wrought iron communion rails by John Robins. A memorial tablet on the north wall to the church's most celebrated rector, John Newton, bears an epitaph written by Newton himself, which begins: 'John Newton, Clerk. Once an infidel and libertine, a servant of slaves in Africa, was, by the rich mercy of our Lord and Saviour Jesus Christ, preserved, restored, pardoned, and appointed to preach the faith he had long laboured to destroy.'

SUBSIDIARY FEATURES: Railings of c1900 at west end, extended to left and right c1992 when curved screen walls housing entrances to the Underground station were removed.

HISTORY: The church is first recorded in 1191; the founder may have been a Saxon noble, Wulfnoth, possibly commemorated in the church's name. Alternatively, the name may be connected with the wool trade; certainly this was true of the nearby church of St Mary Woolchurch Haw, destroyed in the Great Fire of 1666 (its parish then united with that of St Mary Woolnoth). The full dedication of the church is to St Mary of the Nativity. The advowson was given by the founder or his heirs to the Priory of St Helen, Bishopsgate; after the dissolution of the monasteries it reverted to Henry VIII, who gave it to Sir Martin Bowes of Lombard Street, a Goldsmith and in 1545-6, Lord Mayor. The advowson passed from Bowes to the Goldsmiths' Company, and the patronage subsequently passed through various hands. The church is the parish church of the Lord Mayors of London; the Mansion House stands almost opposite, on the site of St Mary Woolchurch Haw. This association helped protect the church from repeated threats of demolition between 1863 and 1926, notably prior to the building of Bank Underground station in 1897. (The crypt and plinth of the church were used as a booking hall in 1897-1900.)

Excavations of c1716 uncovered remains thought to be Roman, and there is evidence of major Roman buildings in the immediate vicinity. The early church was rebuilt during the course of the C15; the new building was consecrated in 1438, but additional work appears to have taken place towards the end of the century. The church was damaged by the Great Fire of London, and was partially rebuilt by Christopher Wren in 1670-5. A major contribution to the cost of this work was made by Sir Robert Vyner, Lord Mayor in 1674; the church was at one time known as Sir Robert Vyner's church. Vyner is said to have had his own entrance to the east end of the church, a privilege inherited by the Post Office which subsequently stood on the site of his mansion in Lombard Street. In 1708 the style of the church was described as 'modern Gothick' (Edward Hatton, A New View of London).

In 1711 it was determined that a new church should be built under the 'Fifty New Churches' Act (it was the only church in the City to be built under the Act), but by 1712 the condition of the church was so dilapidated that the parishioners were afraid to worship there, and repairs to the existing structure were undertaken. In 1716 drawings for the new building were prepared; Nicholas Hawksmoor was assisted by John James, who also had the title of surveyor, but principal responsibility for the design rests with Hawksmoor. St Mary Woolnoth was Hawksmoor's only City church, and is the smallest he built; Kerry Downes has observed that it is perhaps the most powerful of his churches, because it is the most compact (Hawksmoor, 1959). The new church first opened for worship on Easter Day 1727.

From 1780 to 1807 the rector of St Mary Woolnoth was John Newton (1725-1807), the most celebrated priest associated with the church. Newton, born the son of a master mariner in Wapping, spent the early part of his career as a slave trader. From 1745-1754 he worked on slave ships, serving as captain on three voyages. He was involved in every aspect of the slaver's trade, and his log books record the torture of rebellious slaves. Following his conversion to devout Christianity in 1748 Newton became 'surveyor of tides' at Liverpool, devoting his spare time to private theological study. He soon became one of the area's leading theological laymen, but for some time his radical reputation stood in the way of his finding employment in the Church of England. Nevertheless, in 1764 he was made curate-in-charge at the church of Saints Peter and Paul, Olney, Buckinghamshire (q.v.). That same year he published his autobiography, 'An Authentic Narrative', which established him as one of the leading figures of the evangelical revival. Newton stayed at Olney for 16 years, winning fame as a preacher as well as a writer. During the 1770s Newton worked with the poet William Cowper on a collection of 'Olney Hymns' (published 1779), the most famous of which was 'Amazing Grace' (the hymn, sung to a different tune, was to become associated with the struggle for equality in the southern states of America during the 1960s).

In 1780 Newton became rector of St Mary Woolnoth; his reputation grew in this cosmopolitan setting, and his status as a patriarch attracted large congregations. In 1785-6 William Wilberforce came to him for advice during the crisis of his evangelical conversion; Newton counselled him to use political means to do God's work. In Wilberforce's case, this would prove to be the campaign for abolition. In 1788 Newton's pamphlet, 'Thoughts upon the African Slave Trade', revealed his past as a slave trader, condemned the trade, and expressed regret at his part in it. Later that year Newton was amongst the witnesses called by the parliamentary select committee for examining the slave trade; Newton provided detailed evidence of the treatment and conditions suffered by slaves in transit. In response to arguments about the economic advantages of slavery, Newton quoted, ' ''It is not lawful to put it into the Treasury, because it is the price of blood,'' ' [Matthew 27:6]. Newton's singular position as a figure of unimpeachable moral authority with first-hand experience of the slave trade made his contribution to the success of the abolition movement extremely valuable. John Newton died in December 1807, shortly after the Abolition Act passed into law. He was buried beside his wife in the crypt of St Mary Woolnoth, but the building of the Underground station led to both bodies being re-interred at Olney in 1893.

REASONS FOR DESIGNATION:
The Church of St Mary Woolnoth is designated at Grade I for the following principal reasons:
* Hawksmoor church of exceptionally original design, a unique work of English Baroque architecture
* Interior retains original rich decoration in plaster and wood
* Strong connection with John Newton, clergyman and slave trader, adds to historical interest of building.
* Group Value with other major listed buildings; an arresting landmark at the centre of the City of London