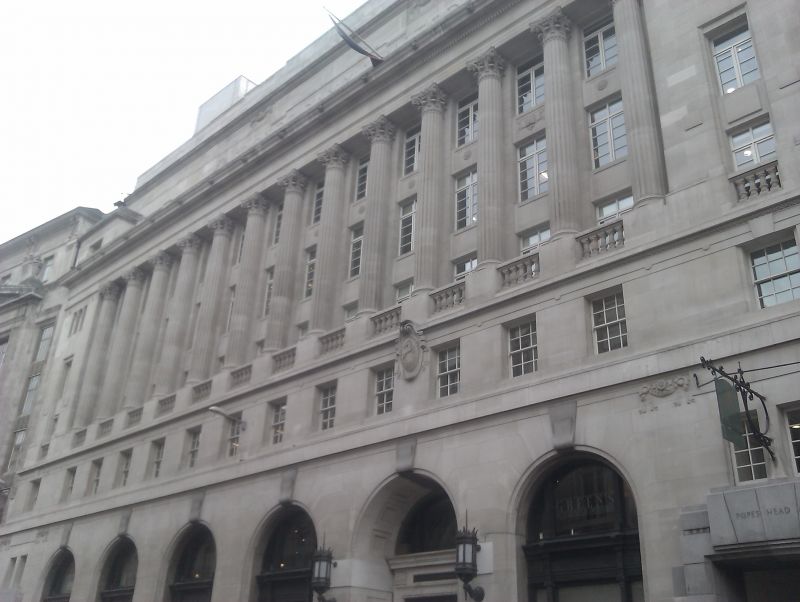 Includes Nos.15-22 CORNHILL EC3
Lloyd's Bank Headquarters. 1927-30 by Sir John Burnet, Tait & Lorne; Campbell-Jones, Sons & Smithers, executive architects. Portland stone, granite coursing to ground floors. Metal windows. Westmoreland slates to roof.
PLAN: tapering rectangular plan, narrower at west end, with an inner light-well. Main stairs to centre, west end, with a lesser light-well behind; secondary staircases to north and south of east end of light-well. The Cornhill front is 146 ft long; the Lombard Street one, 198 ft..
EXTERIOR: six storeys and two attic levels; deep basement. North elevation to Cornhill, formerly with the main entrance: eight-bay arcaded ground floor, the endmost bays straight-headed, that to the west entering Pope's Head Alley. Main entrance three bays in from west, with flanking lanterns and a cartouche above at third floor level. Grey granite facing to the lower courses. Large arched windows over rectangular ones, the latter with an entablature at mezzanine level of bronze, carried on slender Corinthian columns. Plat band at first floor level, with rectangular window openings above, arranged 1 - 14 - 1. This rhythm is repeated for the upper three floors, with a giant order of Corinthian half-columns to the centre, flanked by single projecting side bays. Entablature at sixth floor height, with lion masks to the cornice. Projecting side bays with single openings, flanking the tall attic: this is inscribed, in sunken Roman lettering, LLOYDS BANK LIMITED, between wreaths; empty inscription panel over centre. Upper attic level. South elevation to Lombard Street: similar, but not identical, to the Cornhill front. Eleven bays at ground floor level. Arcaded ground floor with recessed doors within stone surrounds, set beneath coffered arches. Large arched windows over rectangular ones, the latter with an entablature at mezzanine level of bronze, carried on slender Corinthian columns. The entrance is marked out by flanking lanterns, and a cartouche at second floor level. Grey granite facing to the lower courses. The openings one from the west and one from the right are straight-headed: that on the west marks the (slightly re-aligned) line of Pope's Head Alley, and that to the east, Change Alley. At first floor level, between plat band and entablature, is a procession of 18 sunken rectangular windows, arranged 1 - 16 - 1. This rhythm is repeated for upper three floors, which are fronted with a giant order of Ionic pilasters. Entablature at sixth floor height, with lion masks to the cornice. Recessed attic storeys.
INTERIORS: the building retains an exceptional sequence of intact interiors, reflecting its status as the headquarters of a leading bank. Features include the following. A large marble-lined banking hall (now reception), ringed with giant Ionic columns carrying an entablature, with a glazed ceiling above. The original counters have gone, but the ornate bronze side doors to north and south, by the Birmingham Guild, remain in situ, with the Lloyd's Bank shield flanked by horse supporters, over palms and fillets. The fronts of the mezzanine floor are faced in stone, and embellished with carved depictions of historic coinage. The side walls at the east end are embellished with archaic style reliefs of husbandry and agriculture. At the west end is a Neo-Grec war memorial (altered in 1949 to accommodate WW2 references), flanked by bronze lanterns, consisting of three name panels surmounted by a scallop with a statuette of Peace; in front is a ledge for tributes. In front, set into the floor, is a low relief bronze roundel depicting the Lloyd's black horse in mosaic, by Gilbert Bayes. Behind the memorial is an imperial stair, rising up to the fifth floor, with bronze balustrades and marble-clad dado. Original bronze-lined lifts remain in situ, with Moderne embellishment. A number of the upper floors are relatively plain, with marble panelling around the lifts and at dado level. Four offices on the fourth floor, on the Cornhill side, and two on the Lombard Street side, retain softwood panelling, with doorcases bearing scrolled pediments; one on the north side retains a segmental vaulted ceiling. The fifth floor is the principal executive floor, and, after the ground floor, the most lavishly appointed. The stairs terminate in a split-level landing, with double arches carried on paired Greek Doric columns of marble. Marble dado and surrounds to the lift doors in the lobbies. Panelled dining room, with fielded panelling in a late C17 style, with carved cornices and door surrounds. Boardroom at east end of Cornhill side, panelled with exotic veneers; decoration in a 'Moderne' style, with openwork over-doors, glossy black door surrounds and skirtings; shallow plasterwork to ceiling. Five panelled offices along Cornhill Side, two more along Lombard Street side.
SUBSIDIARY FEATURES: the Lombard Street elevation has a Corporation of London ceramic plaque stating 'In a house on this site lived Gregory de Rokesley eight times Mayor of London 1274-1281 and 1285'. Other plaques record the award of the 1932 RIBA London Architecture Medal, and the 1999 City Heritage Award.
HISTORY: Lloyds Bank was established in Birmingham in 1765. It established itself in London in 1884, on acquiring a subsidiary, and erected new premises on Lombard Street thereafter. The building is one of the most impressive commercial headquarters buildings of its time, and was designed by one of the leading firms of the day (along with a separate team of executive architects). Its imposing interiors, designed in a blend of late Beaux Arts Classicism and 'Moderne' detailing, survive largely intact. The banking hall retained its 22 counter positions until 1989. Drawings for the banking hall and the Lombard Street front by Cyril Farey were shown at the 1927 Royal Academy.
SOURCES: The Builder, 25th January 1928, 9th March 1928, 25th July 1930; 'Architecture Illustrated' August 1930; 'Building', August 1930; 'Architect & Building News', 19th May 1933.