The City and County of London Troops War Memorial 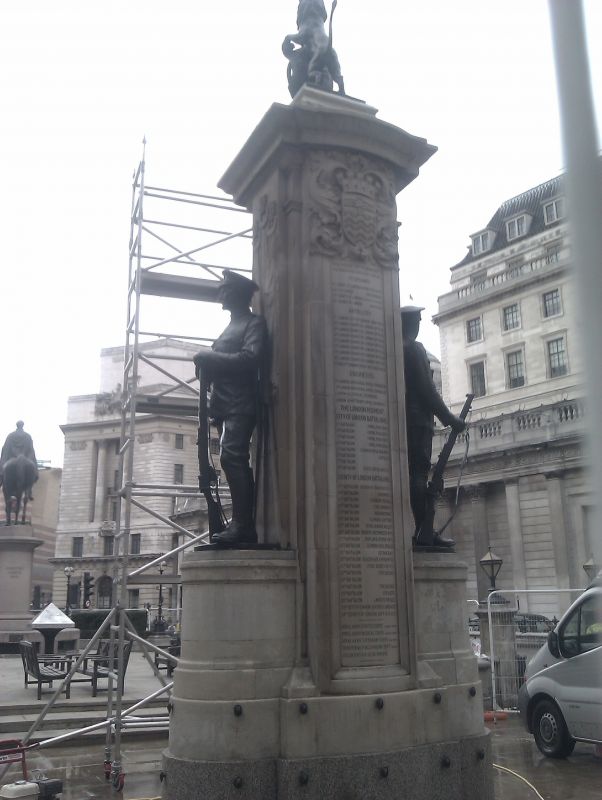 War memorial of 1920 by Sir Aston Webb with sculpture by Alfred Drury.

DESCRIPTION: approximately 7.5m high, it comprises a finely detailed Portland stone pier with two rounded buttress plinths to the base, each of which supports the life-sized bronze statue of a soldier.

The front face of the central pier bears a carving in relief of the coat of arms of the City of London, above three dedicatory inscriptions reading TO THE/ IMMORTAL HONOUR/ OF THE OFFICERS/ NON-COMMISSIONED/ OFFICERS AND MEN/ OF LONDON/ WHO SERVED THEIR/ KING AND EMPIRE/ IN THE GREAT WAR/ 1914 - 1919/ THIS MEMORIAL IS/ DEDICATED IN PROUD &/ GRATEFUL RECOGNITION/ BY THE CITY AND/ COUNTY OF LONDON/ THEIR NAME LIVETH/ FOR EVERMORE/ UNVEILED ON NOV 12TH 1920/ BY HRH THE DUKE OF YORK/ ON BEHALF OF/ FIELD-MARSHAL HRH/ THE DUKE OF CONNAUGHT/ K.G., K.T., K.P./ AND/ ALBEIT MANY UNITS/ NAMED HEREON/ HAVE CHANGED IN/ DESIGNATION AND ROLE/ WE HONOUR AND/ REMEMBER THE MEN/ AND WOMEN WHO SERVED/ IN ALL THE UNITS OF/ THE CITY AND COUNTY/ OF LONDON IN THE WAR OF/ 1939-1945.

Below this an inscription on a small bronze plaque, added after 1945 when the Second World War dedication above replaced the original record, reads RAISED BY PUBLIC SUBSCRIPTION/ AT THE MANSION HOUSE IN THE/ PEACE YEAR 1919 DURING THE/ MAYORALTY OF COL THE RT. HON/ SIR HORACE BROOKS MARSHALL/ K.C.V.O. LL.D. Around the base two rows of bronze pegs ornamented with crossed rifles carry chains for the suspension of wreaths. On the rear of the central pier is displayed the heavily mantled coat of arms of the County of London, below which is the list of the commemorated units. The inscriptions to front and rear are in attached metal lettering, some of which is flush with the stonework and some of which (changed during the addition of the Second World War dedication) stands proud from the surface.

Each side of the pier bears carvings in low relief of three standards, each surmounted by a wreathed crown and topped with a lion statant guardant. On the left (north) buttress stands the bronze statue of a Royal Artilleryman, standing at ease with his rifle in his right hand. On the right (south) buttress stands the corresponding bronze statue of a Royal Fusilier, standing easy with both hands resting on the muzzle of his rifle.

The corniced top of the pier is surmounted by a moulded stone pedestal on which stands a bronze of a lion holding a shield. The shield is ornamented with a relief of St George, mounted, killing a dragon with the legend ST GEORGE FOR ENGLAND.

The present-day London Regiment was formed on 1 August 1993, created from the Headquarters Company and four rifle companies: these rifle companies can trace their origins to the units of Rifle Volunteer Corps raised in 1859 by residents of the City of London and the surrounding counties of Middlesex, Surrey and Kent, intent on securing their home defence. By the time the Territorial and Reserve Forces Bill was introduced in 1907, abolishing the Volunteers, the County of London had been established as an administrative authority. In 1908 the London Regiment was formed as a Territorial regiment for this new county, comprised of 26 battalions. The first eight were the City of London battalions, the remaining 18 the County battalions.

By the end of 1914, following the outbreak of the First World War, 58 battalions had been raised. By May 1915 the regiment had expanded to 82 battalions, of which 56 were involved in the hostilities across every theatre of the war. At the end of the First World War the battalions were re-formed in the Territorial Army. Following various amalgamations and reorganisation, battalions originally in the London Regiment served in the Second World War although the regiment itself had ceased to exist. Continuing reorganisation in the latter half of the C20 led to the formation in 1993 of the present-day regiment.

The City and County of London Troops memorial reflects the London units as they were constituted at the end of the First World War. This includes the eight City of London battalions, one additional City battalion (33rd, Rifle Brigade), the 18 County battalions and one additional County battalion (34th, King’s Royal Rifle Corps); the Royal Fusiliers and the Honourable Artillery Company; four Yeomanry battalions; eight artillery brigades and two heavy artillery batteries; and the London units of the Royal Engineers, the Electrical Engineers, the Royal Army Service Corps, the Royal Army Medical Corps, the Royal Army Veterinary Corps, the Territorial Force Nursing Service, and the Voluntary Aid Detachments. A number of the battalions were originally raised by specific localities or communities: for example, the 11th (County of London) Battalion was known as the Finsbury Rifles, the 14th was the London Scottish, the 28th was the Artists Rifles. Thus, although many of the units represented also instituted their own war memorials for fallen comrades, this memorial commemorates all those men and women who served in the City and County of London Troops.

Designed by Sir Aston Webb, Webb’s original proposal including masts standing 23m high bearing the Royal Standard and the flag of the City of London, and statues representing Peace and Victory, had been rejected by the Court of Common Council: but his second design with sculpture by Alfred Drury was accepted. The budgeted £7,000 for the memorial was raised by public subscription. Drury’s figures were cast by the Albion Art Foundry in Fulham. The stone-carver and letterer was William Silver Frith and the whole was erected by Messrs Trollope and Colls.

The memorial was unveiled by HRH the Duke of York, on behalf of the Duke of Connaught, on 12 November 1920, the day after the ceremony for the burial of the Unknown Warrior at Westminster Abbey. Soldiers from the Royal Fusiliers (City of London Regiment) and the 56th (1st London) and 47th (2nd London) Divisions were on parade, with a guard of honour from 3rd Battalion (Grenadier Guards) at the Mansion House. The service, attended by the Lord Mayor, civic dignitaries, ex-servicemen and many Londoners, was led by the Bishop of London.

The scheme to erect the war memorial in front of the Royal Exchange involved improvements to the space, including replacing the railings at the London Underground railway station entrances to the west with Portland stone parapets with bronze railings and lamps.

Sir Aston Webb (1849-1930) was born in Clapham and in 1866 was articled to Banks and Barry. His own practice, set up in 1873, became the largest in the United Kingdom. He was knighted in 1904 and was President of the RIBA 1902-4 and of the Royal Academy 1919-24. His best known works are the Victoria and Albert Museum and the present form of The Mall, including the re-fronting of Buckingham Palace, the setting of the Queen Victoria Memorial and Admiralty Arch. He was responsible for a number of war memorials, including the Dover Patrol Monument (Grade II*-listed) and those at Ditton, Hertford (in collaboration with Alfred Drury), Malvern and Wigan, which are Grade II-listed.

(Edward) Alfred Briscoe Drury (1856-1944) studied in London and Paris. He was elected a Royal Academician in 1913. His first major work was a statue of Circe (1894) erected in Park Square, Leeds, that is Grade II-listed. He is principally known for his architectural sculpture, which included the prophetic allegorical pairs of figures on the 1905 War Office in Whitehall of Sorrow and Joy, Horror and Dignity of War, Truth and Justice, and Victory and Fame. His best known work was his collaboration with Sir Aston Webb at the Victoria and Albert Museum. His Boer War Memorial at Clifton College, Bristol is listed Grade II*. His Grade II-listed First World War memorials include Hertford, for which Sir Aston Webb was the architect, Kidderminster, and Malvern College.

The war memorial to the City and County of London Troops, situated between Cornhill and Threadneedle Street, City of London Street, is listed at Grade II* for the following principal reasons:
* Historic interest: as an eloquent witness to the impact of world events on the capital city of the British Empire, and to the sacrifices it made in the conflicts of the C20;
* Architectural interest: the memorial achieves a fine balance between architecture and sculpture and illustrates Sir Aston Webb’s skill;
* Sculptural interest: whilst Alfred Drury was noted for his architectural sculpture, the memorial’s figures show his ability with free standing sculpture;
* Group value: the war memorial stands at the heart of the City of London within a group including the Grade I-listed Mansion House, Bank of England and Royal Exchange, and Chantrey’s Grade II-listed equestrian statue of the first Duke of Wellington.