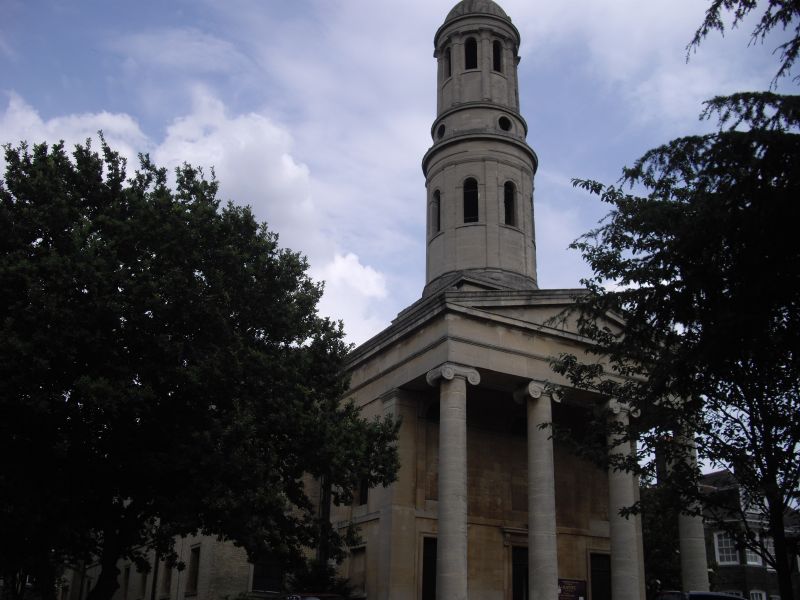 II*
Parish church. The fifth "Waterloo" church, built 1820-1824 to the designs of Robert Smirke in Greek Revival style. In 1891 William White truncated the western gallery, moved the organ and provided new pews. In 1896 E.W Mountford added an apsidal chancel, Lady Chapel and vestries. Most windows were replaced following bomb damage and the ceiling is a restoration of 1951 by Caroe and partners following fire damage. Built of stock brick with Portland stone dressings.

Nave of seven bays with round-headed windows above linked by band at impact level and rectangular openings below. East end has 1896 Mountford circular apse with three round-headed openings, the central infilled with stone, all with elaborate keystones and brick and stone piers. Vestries have Venetian windows to north and south and splayed mullions to east.

Interior has circular lobby with stone Royal Coat of Arms and two stone staircases with iron handrails. Seven bay nave has galleries on three sides. Fluted Doric columns to top of gallery and piers below (but rumoured to be cast iron columns beneath). Coffered ceiling of 21 panels replaced following fire in 1951.

Pews by William White of 1891. Elaborate late C17 style pulpit of 1893 and eagle lectern of 1894. Octagonal stone font with marble basin and columns of 1908. Some early C19 wall tablets. Round-headed chancel arch on attached columns. Sanctuary has intersecting arches. High altar has a copy of Leonardo's "Last Supper" in the tympanum of the broken pediment. Chancel pews possibly by William White. Lady Chapel of 1896 by E.W Mountford has marble walls and reredos has a text with heart designs below a painting of the Virgin, Child and St Anne by a parishioner, a Mrs Kirkby.

Monument of 1902 to Jessie Elizabeth Mountford of Connemara marble with bronze plaque. Five bay stained glass window. Memorial chapel to south made out of Mountford's vestry after 1925.