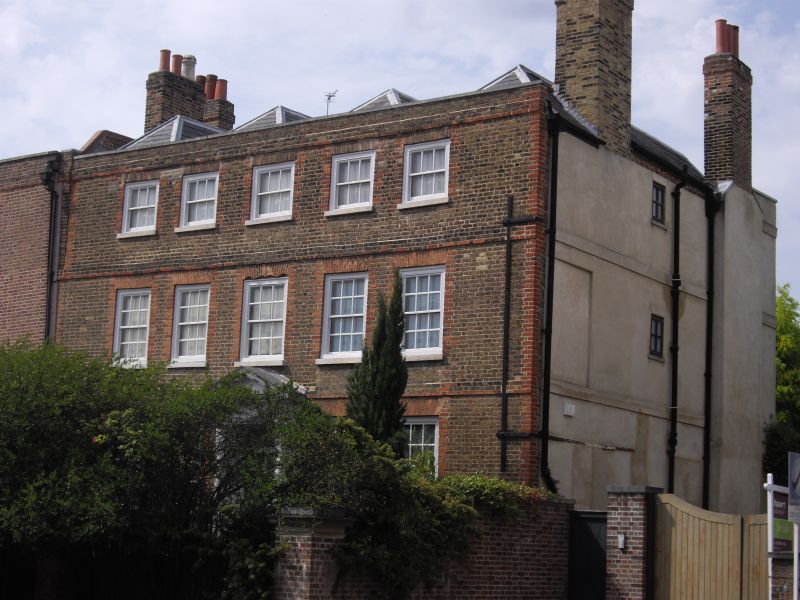 Large house. Circa 1736, partially refenestrated in later C19. Built of stock brick with red brick dressings and slate roof in four hips to the rear. Three storeys and cellars; five windows to front elevation, six to rear. Bands between floors and deep band to parapet. Red gauged flat arches and dressings to windows, which are late C19 sashes with horns but no vertical glazing bars. Red quoins to front. Central wooden doorcase with Doric engaged columns, triglyphs and pediment. Deep fielded six-panelled door. Rear elevation retains early C18 windows to right hand part with thick glazing bars and an early C19 curved three-light bay with thinner glazing bars. The early Cl8 interior survives largely intact, including stone floor and panelling to hall, first floor principal rooms and ground floor, doors, cupboards and other fittings, moulded timber and plaster cornices, shutters and some bolection moulded fire surrounds. The upper flights of the contemporary staircase with moulded handrail and turned balusters also survive. The first known occupant recorded (in Vestry Minutes for 1772) was a William Vander Esche Esquire. In the early C19 it was used as a 'Boarding School for Young Ladies'. This is one of the earliest and the best preserved of the middling size houses of wealthy Huguenot or Dutch immigrant families who lived in Wandsworth and Putney in the early Cl8.