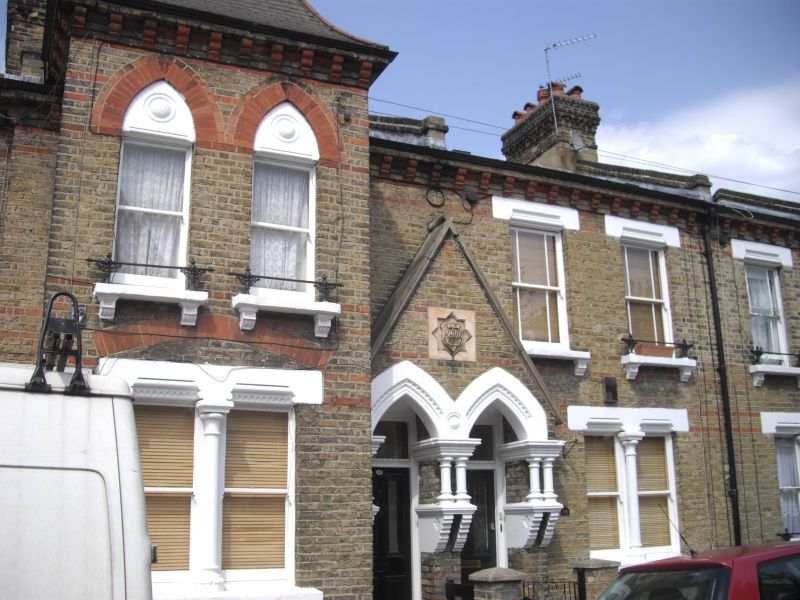 SHAFTESBURY PARK ESTATE SW11
1.
5033
Nos 37 to 71 (odd) and
38 to 72 (even)
(Elsley Road)
TQ 2875 10/2
II GV
2.
Dated 1873. Designed by Robert Austin. The centre part of a terraced street,
articulated east and west by towered features. The houses are of 2-storeys, 2-bays
wide. They are of yellow stocks with dressings of stone and of red and darker
brick, the roofs being of slate.
Of those pairs with towers Nos 41 and 43 on the north side face Nos 42 and 44 on
the south and are mirror images of them. Nos 66 and 68 have a similar relationship
to Nos 65 and 67. The 2 pairs on the east mirror the 2 pairs on the west.
On that house of each pair designed as the major eyecatcher the principal bay
projects boldly from the main street line, screening the rest of the pair from the
end of the street. On the ground floor of this bay a double sash window has a
bracketed cill and a central mullion with engaged colonnette. The latter supports
a moulded lintol beneath a relieving arch. On the first floor twin sash windows
have bracketed cills and blind pointed-arch heads within gauged brick arches. The
bay breaks the main eaves line to rise into a square tower with bracketed cornice,
the whole capped by a square spire hung with slates.
In the interior angle formed by the tower each pair of houses has a coupled Gothic-
style porch on corbels.
These support coupled colonnettes with coupled pointed arches springing from them
beneath a gable bearing the estate monogram and the date 1873.
The second house of each pair has on the ground floor a double sash window like its
fellow but without the relieving arch. On the first floor are twin sash windows
with bracketed cills and moulded lintols beneath the bracketed eaves of the slate
roof.
The other houses of the group are paired. Each pair adjoining the eyecatcher
houses on the side towards the centre of the street has a coupled porch like theirs,
the rest having simple coupled pointed arch door surrounds. These are flanked by
double-sash windows.
On the first floor each house of each pair has twin-sash windows and bracketed eaves.
The stacks have cogged cornices and oversailing courses.