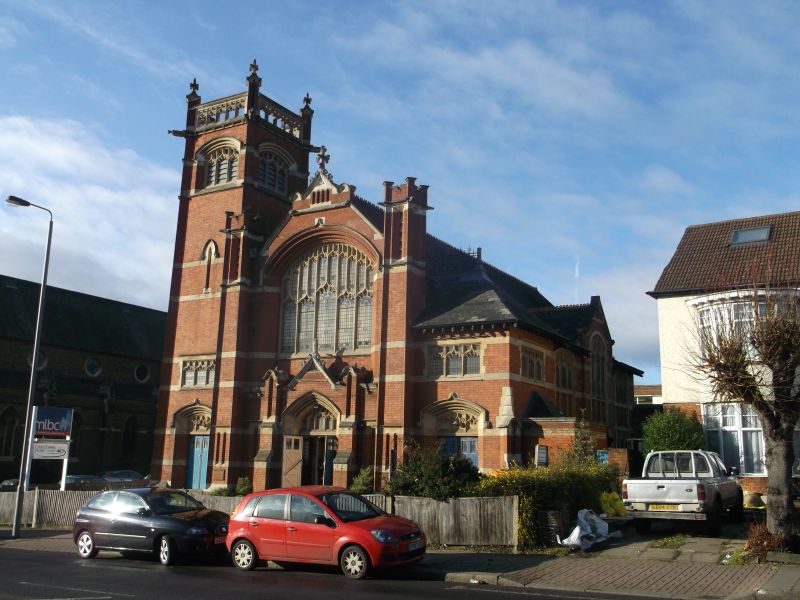 MITCHAM LANE SW16
1.
5033
Mitcham Lane Baptist Church
TQ 27SE 4/29
II
2.
1902 by George Baines and R P Baines. A Perpendicular Gothic-style building of
red brick with stone dressings, and pale gault banding, slate roofs and crocket
tiles, having a return elevation to Welham Road. On the Mitcham Lane elevation towered piers with angle buttresses frame the gabled 'west' front of the nave and are flanked by the recessed tower with its angle buttresses on the left and a 2-storey bay on the right finished with a hipped roof, railing and needle finial.
At ground floor level the central gabled porch between buttresses frames a splayed pointed-arch entrance with stepped stilted head within a label. The double doors have elaborate iron hinges and the stilted head above is filled with blind panel tracery. The tower and right-hand bay have identical segmental-headed entrances with detailing similar to that of the main entrance. Flat-headed panel tracery windows of 3 ogee lights above the side entrances flanking the great 'west' window of the nave. The latter has a stepped segmental head and is filled with panel tracery. The fanciful detail of the nave gable rises to a plume finial. Viewed from the south the climax to the 2 street elevations is the tower. Its middle stage is pierced on each face by a loophole. At the belfry stage the louvred openings have segmental heads and 3 ogee lancets. A moulded string breaks round the buttresses which rise into pedimented pinnacles with plume finials. The pinnacles are tied by screens of open panel tracery. The Welham Road elevation has a tripartite arrangement of gabled transept between
wings, with panel tracery incorporating windows of ogee lights on ground and first floors. The first floor windows have segmental heads.