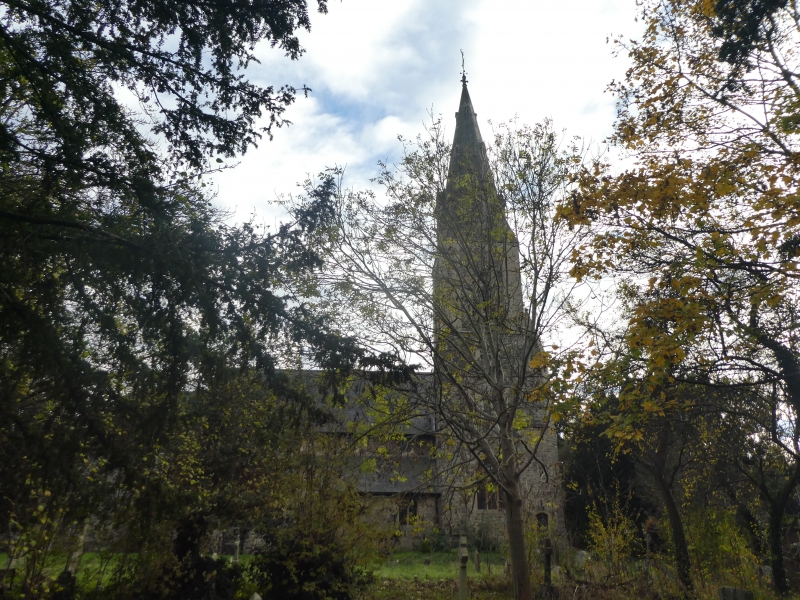 II*
1862-4 by Frederick Pownall and William Young. Spire added by Carpenter and Ingelow 1870.

EXTERIOR: St Dunstan's is built in the Gothic Revival style of the C13. Its dominating feature is the NW steeple which is a landmark for a long way around. The tower has four stages and clasping buttresses, the NW one incorporating a stair terminating in an octagonal stone cap. The lowest stage of the tower has a two-light window on the N side, and to the W a doorway squeezed in between the tower stair and SW buttress. The belfry windows are of two lights with a central shaft and a quatrefoil in the head. The spire is of the broach type and has large lucarnes low down in the cardinal directions and two further small tiers, first in the alternating directions, and finally, near the top, in the cardinal directions once more. At the W end of the nave a large wheel window with eight divisions is set above four equal-height lancets. There are five bays to the nave and lean-to S aisle (four to the lean-to N aisle because of the tower). Between nave and aisles is a shallow band of walling which carries a series of five cinquefoiled clerestory windows. The aisles and chapel have pairs of lancet windows on the side elevations. On the N side are the twin gables of a shallow double transept: each has a two-light window with a quatrefoil in its head. The addition of a flat roof block N of the vestry appears to have been made c1970. The chancel, which is lower and narrower than the nave, ends in a three-sided apse .

INTERIOR: The predominant character of the interior stems from the impressive polychromatic treatment of the walls of the body of the church (the chancel has been plastered and whitened). Bare red brick is exposed and it is enlivened with black bands and, in the nave, below the clerestory a frieze of black-brick zig-zag bands. The arches to the arcades, which have a chamfer and a plain step, are also polychromatically treated with red brick alternating with limestone. The piers of the arcades are round and have shallow capitals with very prominent foliage which projects beyond the abaci. The chancel arch is similar to the nave arches but has the addition of black-brick detailing. The nave roof trusses have a collar with scissor-bracing above: the infill of the roof is longitudinally boarded. The chancel roof is arched and has delicate stencilled decoration of stars and stylised flowers on the bare boards. The aisle roofs are plain lean-tos.

PRINCIPAL FIXTURES: The most striking feature is the treatment of the E end of the sanctuary. Here a tripartite reredos in alabaster depicts the Miracle of the Loaves and Fishes and this probably dates from the opening of the church or shortly afterwards. Either side the walls are lined with tiles where an upper frieze has angels bearing texts and below is a series of vertical rich blue patterned tiles. This work commemorates a death in 1895. The double sedilia has C13-style trefoiled heads to the seats under gabled tops and also more angels of the 1895 scheme at the heads of the seats. The pewing is largely complete, no doubt of c1866, and has shaped ends with elbows. The pulpit and chancel furnishings are of the C20. The nave and aisles have ornamented cast-iron grilles over the heating ducts, set among the red and cream tile floor tiles. The font is a square bowl bearing the IHS monogram, set on stubby shafts with stiff-leaf foliage. The S chapel seems to have been refurnished as a World War One memorial. The W lancets have glass of 1872 by Clayton and Bell and the transept and aisles have four windows by Kempe and Co dating from between 1909 and 1928.

SUBSIDIARY FEATURES: To the S of the church is the partly medieval flint-and-brick Lumley chapel, separately listed at Grade II*. This is the E end of the chancel of the old church which was preserved to serve as a sepulchral chapel and as a repository of the brasses and monuments from the demolished structure. At the SW corner of the churchyard is an attractive half-timbered lych-gate of 1891 set on a brick, flint and stone plinth: the rendered infill panels are prettily decorated with trails of flowers and fruit.

HISTORY: Plans for the church had been drawn up by mid-1862. The consecration took place on 17 November 1864 when there were 606 seats, including 184 of them being free for the poorer inhabitants. At this time what is now the S chapel had seats facing N and evidently intended for the use of children.
The dismissive judgement of 'large and dull' by Cherry and Pevsner seems unduly harsh. The exterior is a well-composed Early English Gothic structure, and the interior is much more striking than most churches of its time thanks to the vibrant use of polychromy (though the plastering of the chancel is to be much regretted). The decoration of the chancel roof and the treatment of the sanctuary walls are of some distinction.

Architects: Frederick Hyde Pownall (1832-1907) was a London architect who had been articled by Samuel Daukes. He was a partner of William Young (d 1877) and became County Surveyor of Middlesex from 1888. Richard Herbert Carpenter (1841-93) was the son of the important early Victorian church architect R C Carpenter who died young in 1855. The elder Carpenter's practice was taken over by William Slater who was joined as a partner by Carpenter junior in 1863. On Slater's death in 1872, Carpenter took on Benjamin Ingelow (d.1925), who had been an improver and assistant to Slater, as a partner.

REASONS FOR DESIGNATION:
The church of St Dunstan, Sutton is designated at Grade II* the following principal reasons:
* It is a very well-composed mid-Victorian church in the Early English style with an outstanding polychrome interior.
* It has fittings and decorative work of note.