A Grade I Listed Building in St Katharine's & Wapping, London 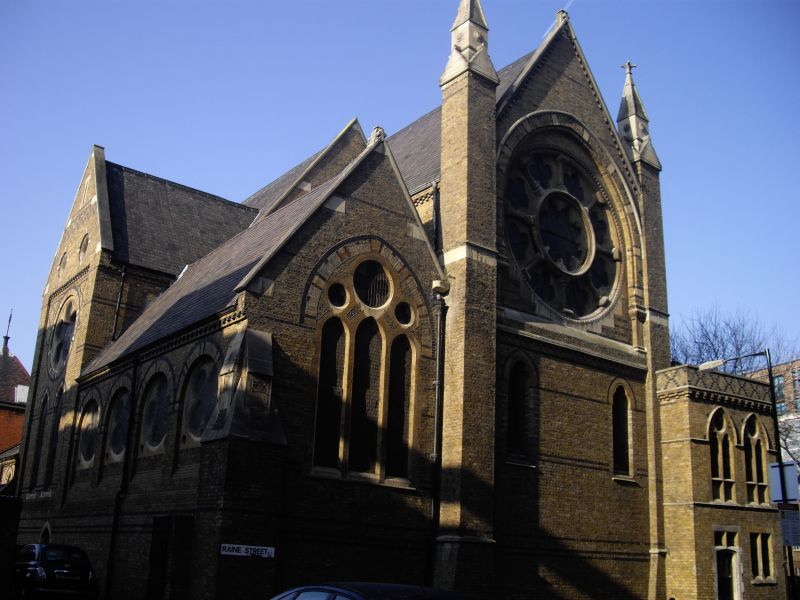 I
Anglican church, late C19 by F. H. Pownall with other work by Bowes A. Paice and Maurice B. Adams. The clergy houses at the west end are listed separately.

MATERIALS & PLAN: Stock brick with polychromatic brick and stone detail and stone dressings. Slate roofs, tiled roof to baptistery. Interior red brick with tuck pointing and black brick and stone dressings. Very unusual plan with the W end of the church facing Wapping Lane but screened by the clergy houses which were originally linked at upper level. There is a passageway between the houses with entrances up steps from the passage which leads to a small courtyard in front of the W end of the church. Clerestoried nave with lean-to N and S aisles and transepts, organ chamber in N transept, NE 2-storey sacristy, clerestoried chancel with S chancel chapel. On the S side there is a gabled mortuary chapel and SW baptistery/unfinished tower.

SETTING: The setting is partly the result of World War II bomb damage, the N side of the church, originally attached to other buildings, is now visible across a green space. The London Docks, from which the East window of the church was once visible, have been infilled.

EXTERIOR: Characterised by bold plate traceried and geometric windows, blue brick polychromatic detail and toothed and Lombardic brick corbelling. The chancel has N and S buttresses rising as stone pinnacles flanking the gable which has stepped brick decoration. Large E wall wheel window is recessed under a slightly pointed arch; 2 trefoil-headed lancets below. The NE sacristy has a corbelled parapet decorated with blue brick diapering above a moulded stringcourse. The E end has a segmental-headed doorway with 2-light overlight and square-headed 2-light mullioned window alongside. The upper storey has two 2-light windows with plate tracery and blind stone panels below the sills. The SE chapel has a 3-light plate-traceried E window and 4, bold, high-set quatrefoil S windows in round-headed recesses with splayed sills. The S transept has a large cinquefoil window above a pair of lancets and quatrefoils in the gables, N wall of N transept is blind. Tall trefoil-headed clerestory lancets to N and S sides of the nave and to the S aisle, the N aisle is blind. The SW baptistery/unfinished tower is red brick with a peaked tiled roof. The W end of the church has a stock brick gable of the Pownall phase, the red brick W end wall breaks forward from the gable and has a moulded W end doorway flanked by one-light trefoil-headed windows. Above them two very large 2-light plate-traceried windows. The clergy houses at the W end, which are listed separately, are stock brick with red and cream brick and stone detail.

INTERIOR: The church is bold and richly decorated, both with brick and stone bands and diapers but also with furnishings, most of which are C20. Floor is of patterned encaustic tiles and woodblock. Chancel arch is of two plain orders of 2-centred arches, the inner order on stone shafts on long stone corbels. There are similar arches into the transepts. There is a painted iron chancel screen on a low, coped, ashlar stone wall. The screen and rood beam were planned in 1880 in memory of Father Lowder but not executed until c.1925. The 3-bay N and S arcades with two plain orders of 2-centred arches are on cylindrical piers. The capitals are uncarved blocks of stone except one on the S side, carved with waterleaf. The nave roof is a tie beam, A-frame king post with scissor-bracing in the apex and short straight posts under the tie. These are on timber wall posts on stone shafts that divide the clerestory into bays. Intermediate trusses omit the tie and king post. The nave roof is plastered behind the rafters. The chancel has a panelled barrel ceiling painted with stripes and stencil patterns and a ceilure over the sanctuary. The cross ribs of the ceiling are carried on stone wall shafts on deep stone corbels. Two-bay arcade to the S chapel with an octagonal pier with a capital carved with angels.

FIXTURES & FITTINGS: The SE chapel has a metal screen to the transept and a metal parclose to the chancel. There is a 1950s gilded oak reredos by Lawrence King with vertical panels and posts supporting a deep cornice. The E wall is also panelled and gilded. There is a trefoil-headed piscina in S wall. Choir stalls have shouldered ends with poppyhead finials, the backs of the second tier pierced with quatrefoils. The walls of the SE chapel are panelled with a brattished cornice, the panels incorporating paintings. The chapel has a crested timber reredos with paintings under a frieze of cusped quatrefoils. The tower/baptistery has a brick vaulted roof with stone ribs and a grand ashlar staircase with carved angel newell to the unbuilt W gallery. Font with a plain octagonal bowl on an octagonal stem decorated with shafts. Elaborate timber font cover with ogee-headed niches containing carved figures of saints below a tall conical top crowned with the pelican in her piety. Font shafts and cover painted in the 1950s. A massive font crane with 3 decorative iron brackets is supported by a classical stone structure across the tower staircase. The 1949 iron gates into the baptistery using ironwork salvaged from the bomb-damaged church were designed by Romilly Craze and made by Fred Sage and Co. Nave benches with Y-shaped ends. The former mortuary chapel originally had a doorway to the W. This has been converted into a round-headed window. It is now entered from a plain square-headed doorway from the S aisle. The 1960s trussed roof was inserted following damp problems, corbelled off a wallplate on brackets. The E wall is decorated with 1880s kneeling angels on either side of a tripartite reredos with smaller angels in the side panels. The N wall is decorated with censing angels painted on canvas. There is a cylindrical timber pulpit with columns and a moulded cornice which originated from St Barnabas, Jericho. There is also a plain 3-sided pulpit (not used) from the ritualist All Saints, Margaret Street, LB Westminster. The Lady Chapel has a post-war tryptich reredos, the central panel painted with Our Lady of Wapping by Trevor Griffin, dated 1948. The Virgin is shown in front of a realistic backdrop of dockside buildings. Stained glass mostly post war by M E Aldrich Rope in traditional Gothic style and vivid colours and incorporating local detail. The E window with Our Lady of Walsingham in the centre includes lights with the towers of various London churches. The E window in the SE chapel includes background detail of dockers from different periods. The four S windows of the SE chapel commemorate priests of this church. The Hardman windows in the nave are post-war.

HISTORY: The Church of St Peter, Wapping Lane was built in three stages following a long campaign for public donations from 1860. In 1865-6 the main body of the church was built to designs by F. H. Pownall; the work was not completed until 1939 and the top of the tower and west gallery were never built. In the 1880s, a congregation member, Bowes A. Paice, built a pair of clergy houses (1881-3) adjoining the west end. At around the same time work began on the designs of Maurice B. Adams (the editor of Building News) for a baptistery, SW tower and mortuary chapel at the west end which were built in 1884-94. The third phase of building was after the war and involved repair to the bomb-damaged church and reconstruction of the more northerly of the two houses that had been destroyed by bombing.

The Church of St Peter, Wapping Lane was constructed and served by the clergyman Charles Fuge Lowder and the Society of the Holy Cross in response to the high population density and acute social welfare problems of the East End in the C19. From 1856, Lowder, first as a curate of St George-in-the-East and then as vicar of St Peter's Wapping Lane, initiated a mission - the first of its kind - to minister to the poor in the East End. It provided social welfare to the area, including schools, adult evening classes and hostels for homeless girls. This was coupled with elaborate rituals, street processions and outdoor preaching led by Lowder from St Peter's Church. After initial suspicion of Lowder's high-church leanings, which resulted in riots in St George-in-the-East in 1859, local residents became sympathetic to the aims of St Peter's Church, impressed by Lowder's dedication to the poor during cholera outbreaks. The church was notable for its large congregations, and a survey in 1902-3 put numbers at over a thousand. St Peter's was the object of a national controversy in 1869 and 1877-8 where Lowder's ritualistic practices were challenged under church worship legislation. The charges were dismissed and Lowder's ministry at St Peter's contributed to the acceptance of High Church ritual within the Church of England.

SUMMARY OF IMPORTANCE: The Church of St Peter, Wapping Lane is of exceptional special architectural and historic interest as the church purpose-built for the first High Church mission to the East End poor. Its location, architecture and fittings articulate the aims of Anglo-Catholic evangelism: to offer the poor a vision of the beauty of holiness coupled with a programme of social welfare. This was a church built with acute sensitivity to its surroundings, including the wheel window which was positioned in the east end gable so as to be visible above the dock wall. The Church is also of more than special interest as a highly-significant church in the rise of Anglo-Catholicism in the second half of the C19; the building bears witness to the liturgy and theology of the influential churchman 'Father' Charles Lowder, with its ornate east end and exuberant use of polycromy. This is a unique historic significance, which is reflected in the architecture the Church of St Peter, which is of a high quality in its own right.