Fountains and Terrace Walls with Lampstandards, Steps and Stone Bollards Enclosing the Square 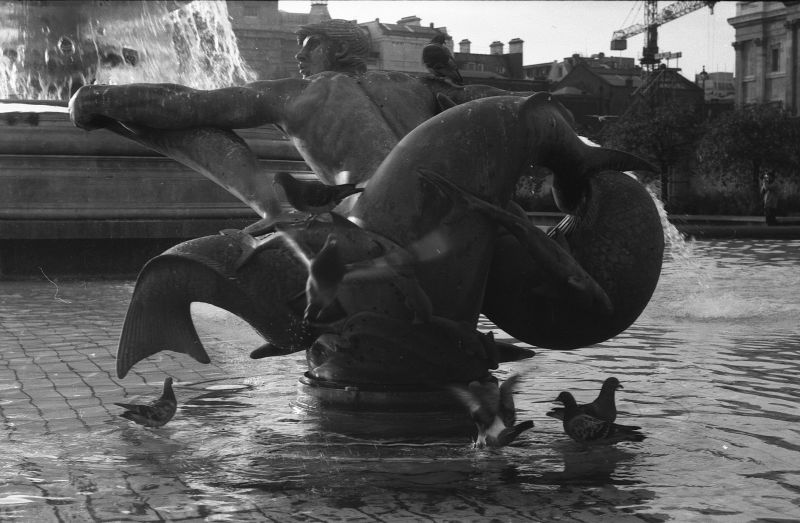 TQ 2980 SE and 3080 SW and NW CITY OF WESTMINSTER TRAFALGAR SQUARE, WC2
72/149;82/21; ; 83/12
Fountains and Terrace Walls
5.2.70 with Lampstandards, steps
and stone bollards enclosing
the Square
G.V. II*
Walls, steps and bollards enclosing the open space of the square and its 2
fountains. 1840, by Sir Charles Barry as a formal setting for Nelson's Column,
the actual fountains remodelled 1939 to the designs of Sir Edwin Lutyens with
sculpture by Sir Charles Wheeler and W McMillan. Granite with bronze
lampstandards and sculpture. Barry defined and levelled the oblong open space
of the square with heavy granite retaining terrace-walls on 3 sides with steps
and statue pedestals in the north-east and north-west corners and a "screen" of
massive granite bollards across the level south side linking with the base of
Nelson's Column. Plinth base to walls and heavy, segmental roll-lipped coping;
the south ends of the east and west flanks terminate in tall circular pedestals
surmounted by polygonal bronze lanterns, that to east serving as a police post.
Set into the north terrace wall, below the balustraded parapet, are bronze
plates of the Imperial Standards of Length and against the wall busts of
Admirals Jellicoe, Beatty and Cunningham by C. Wheeler and W. McMillan, 1948.
The terrace walls are surmounted at intervals by bronze lampstandards with Nico
lanterns, those flanking the head of the steps to the north being elaborated
with the same polygonal lanterns as those on the southern terminal circular
pedestals. The fountain basins, square in plan with large "apses" to each side
also have deeply lipped granite retaining walls; the marble "vase" fountains by
Lutyens and the bronze Mermen and Mermaid groups in the basins respectively by
Wheeler and McMillan. Trafalgar Square, known as such from 1830, owes its town
planning origin to an initial proposal of Nash's in 1811-12, fully elaborated
and laid out as the major executed feature of Nash's Metropolitan - West
Strand Improvements of 1824-26.
Survey of London; Vol XX.
John Nash; John Summerson.