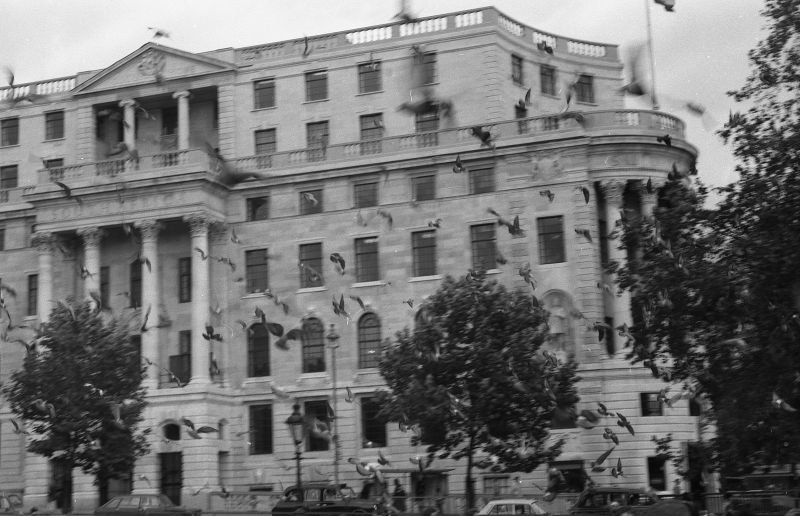 EXTERIOR:
7 storeys, including 2 attic storeys above cornice and balustrade. Main elevation: 13 windows wide with 3 in the central bay; 5-window return on north elevation; 4-window return on south elevation. Apex at southern end, on corner of Trafalgar Square and Strand, comprises a convex screen of Corinthian columns rising through the first and second storeys, with a concave, recessed attic storey. The ground floor has channelled rustication, with ashlar quoins. It becomes two storeys to the south, owing to sloping site. On the attic storeys, the central bay comprises a pedimented open loggia with two Ionic columns in antis. Below this, four Corinthian columns support a projecting balcony and, in turn, rest on a projecting base, which forms the main entrance. On the north side, there is a plainer facade which fronts offices unrelated to those of the South African High Commission. Bronze metal sash windows with small panes, in single and double sized openings. EXTERIOR DECORATIVE PROGRAMME: Symbols of native flora and fauna: keystones carved with mimosa, protea and crinum; sill brackets carved with the heads of elephants, wildebeest, lion and antelope; heraldic devices, all carved in Portland stone by Joseph Armitage (1880-1945) to the designs of Sir Charles Wheeler RA (1892-1974). Gilded springbok above entrance at south corner also by Wheeler. Carving of the ship Goede Hoop in the upper pediment; below, the coats of arms of the provinces comprising the Union of South Africa, and the Southern Cross, by Armitage. In southern-most bay, a stone niche containing a life-sized statue of the Portuguese explorer Bartholomeo Diaz, carved in situ by Coert Steynberg (1905-1982).

INTERIOR:
Entrance Hall: Vestibule and hall with two domes, leading to main staircase. Extensively marbled with South African marble and stones, white, green and grey from northern Transvaal, and quartz. Inlaid stones from Witwatersrand; red jasper, granite, verdite, crocodilite and serpentine. The two domes contain the mottoes, seals and coats of arms of the constituent parts of South Africa, with lettering and carving by Lawrence Turner (fl.1925-35). The twin domes represent the old Dutch republic and the British colonies forming the former Union of South Africa with the motto 'EENRAGT MAAKT MAGT' ('Unity is Strength'). Original pendant light fittings. Wrought-iron balusters to the staircase feature the protea flower, and were designed by Charles Wheeler. First floor lobby, room 406: small lobby adjoining High Commissioner's room. Teak beamed ceiling. Fine mural extends from floor to ceiling on all wall spaces: fresco paintings (i.e. egg tempera on plaster). Signed and dated on a painted tablet: 'Eleanor Esmonde-White and LeRoux Smith LeRoux AD 1938'. Scenes depict the life of the Amazulu, including the Feast of First Fruits, the largest scene on the wall facing the windows. First floor library: Panelled in Burma teak with carved wooden screens above the doors depicting protea and arum lily, and decorative plaster ceiling, all by Lawrence Turner. Murals by J. H. Amshewitz (1882-1942) depicting the travels of Diaz and Vasco da Gama. High Commissioner's room: Panelled in stinkwood; chair and desk made for the room by Armitage. Plaster relief circle of flowers in the ceiling and four symbolic plaques. Fireplace of green and white South African marbles. Cast-iron fireback designed by Charles Wheeler. First floor corridor: plaster relief by John Tweed (1869-1933) depicting the first meeting of Jan Van Riebeeck with the Khoikhoi. Voorhuis or Voorkamer: Small reception and meeting room on the ground floor. A recreation of a Cape Dutch farmhouse with beamed ceiling, terracotta tiled floor, antique Delft tiles, divided door with carved fanlight above. Ante room: created by a screen of solid teak pillars adjacent to corridor. Ten panels by Gwelo Goodman (1871-1939) depicting South African landscapes. Reading room: Panelled in teak, with fitted bookshelves and newspaper racks, heraldic devices around the cornice frieze. Stone fire-surround with inlaid green marble. Above, alabaster relief by Charles Wheeler, depicting allegorical story based on the mythical history and romance of the Table mountain and its bay. The fireplace is flanked by clocks in which a map of each hemisphere revolves round their two poles, and a fixed hand points always in the direction of the sun at noon. Exhibition area: From the entrance hall, stairs lead down to a galleried mezzanine for the display of pictures by Jan Juta (b.1897) and J.H. Pierneef (1886-1957). Some have been covered up to show new work on top. A spiral staircase at south end leads to the basement via a circular limestone wall fountain with a bronze figure by Anton Van Wouw (1862-1945). Display cases built under the galleries depict panoramic views of the towns of South Africa. The dioramas have been moved to the former billiard room. Cinema: Purpose-built cinema with seating and concert platform. The room is panelled in yellow wood set in stinkwood frames, with a wall frieze depicting more native flora and fauna, and Dutch ships, all by Lawrence Turner. Original pendant light fittings.

HISTORY:
This is the most richly fitted and complete of Sir Herbert Baker's four 'empire houses' built in London, and is the culmination of his love and knowledge of South Africa. Its interiors are of exceptional quality, with outstanding murals in the Zulu room.