The Great Cloisters,including St Faiths Chapel,the Chapter House,the Parlour,numbers 1 and 2 the Cloisters,the Dark Cloisters and Dormitory with the Chapel of St Dunstan (School and Busby Library) 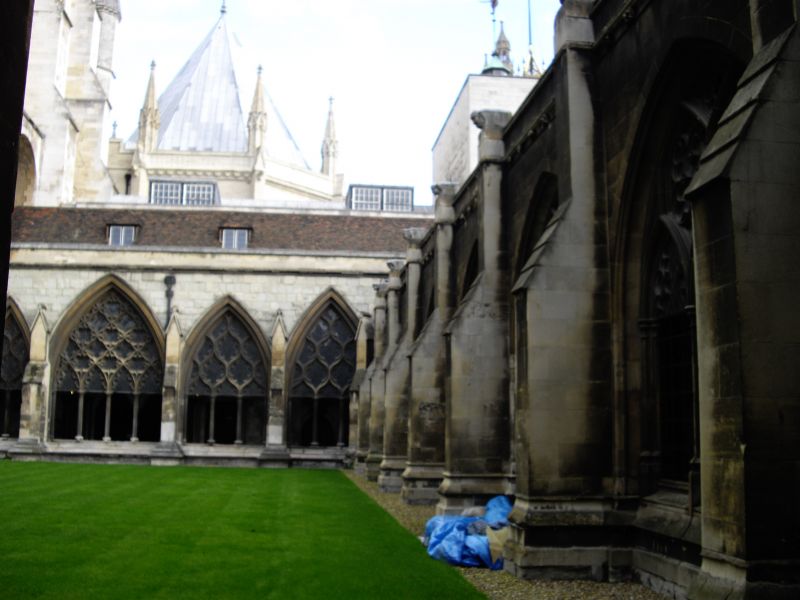 TO 3079 SW CITY OF WESTMINSTER BROAD SANCTUARY, SW1
101/5 (ABBEY PRECINCT AND
WESTMINSTER SCHOOL.)
24.2.58
9.1.70 The Great Cloisters,
including St Faith's Chapel,
The Chapter House, The
Parlour, Nos 1 and 2 'The
Cloisters, The Dark Cloister:
and Dormitory with the
Chapel of St Dunstan
('School' and Busby Library)

Abbey precinct buildings, partly in school use. C.11 and C.12 remains;
Henry III's mid C.13 rebuild; C.14 and C.16 work; and C.17 to C.19
alterations and restorations for the Collegiate Church and School, with war
damage repair/rebuilding. Principally stone with Reigate stone and Purbeck
marble for C.13/C.14 work, brick for some of C.17 and later alterations;
slate, tile and leaded roofs. The Cloister begun c.1245-50 in north-east
corner, contemporary with the church, completed in 1366 with the
construction of the south and west walls; restored by Blore and Scott.
Quadripartite vaults for the last phase; blind arcading to walls and
traceried windows to the garth between buttresses. St. Faith's Chapel
abuts the south transept and was built c.1250, 2 bays to west and one to
east, very fine blank arcading and rib-vaults with head-corbels; a gallery
on tunnel vault at west end formerly linked with the Dormitory over the
Chapter House vestibule and the night stair in the south transept. The
Chapter House of c.1245-53 (restored by Scott) opens off the east Cloister
walk via inner and outer vestibules; very pure Geometrical Gothic, built on an
octagonal plan, over crypt, with central cluster-shaft pier carrying rib-vault
(rebuilt by Scott); innovatory, large 4-light, quatrefoiled and
foiled-circle-crowned windows (cf the nave at Amiens and the virtually contemporary.
Sainte Chapelle); flying buttresses added C14; leaded tent-lantern roof on iron frame by
Scott; mid C13 tiled pavement; blank, Purbeck shafted, arcading with remains of mid C14 paintings; Clayton
and Bell glass. Nos. 1 and 2 The Cloisters on the south side of the south
Cloister walk running west through to Dean's Yard, incorporate from east to
west, remains of the C.ll Abbey Refectory, the Abbey Song School of c.1192,
and the north end of the C.14 Cellarer's Building; sections of the north
and east walls of the Refectory backing the south Cloister walk are exposed
south to the garden of Ashburnham House, Little Dean's Yard q.v.; the lower
part of the wall of C.11 stonemasonry with arcading, the upper part early
C.14 with tall, blocked, transomed Y-traceried windows. To the west Nos. 1
and 2 the Cloisters flank the south side of the Parlour, now the passage
continuing the south Cloister walk into Dean's Yard: of later C.14 build,
in 2 parts each of 2 bays with tierceron vaults; above, what was probably
the Abbot's Camera; rubble walls stone dressed with gable end tiled roof to
eastern half with partly original windows, 2 to north and one in east gable
end; the western half much rebuilt C.18/C.19 in upper parts, has front to
Dean's Yard with 3 storey crenellated tower over Parlour entrance,
extending to south with lower 3-storey, 3-window wide range: the northern
part of the Cellarer's Building (see also No. 20 Dean's Yard, Broad
Sanctuary); large shafted 2 centred arched doorway, with C.18 gate, to the
Parlour, large 2-light Y-tracery window above and 2 and 3 light mullioned
windows to right. The Dormitory range, terminating in remains of the
Reredorter, lies south of the Chapter House flanked initially by part of
the east Cloister walk continued by the Dark Cloister. The Dormitory
retains its later C.11 vaulted undercroft with the Pyx Chapel at the north
end and the remainder used as a Museum; at the north end of the range the
C.13 Day-stairs give access, off the south east corner of the Cloister, to
the Chapter Library fitted out c.1620 like a college library with presses
with some strapwork cresting, the heavy, plain, hammerbeam roof probably
C.14. The rest of the dormitory range at 1st floor level is now occupied
by "School" of Westminster School, refaced in brick by Benjamin Wyatt in
1814 and largely rebuilt after war damage;it nevertheless incorporates C.11
features with Norman doorway in west wall and window remains in east wall;
at the south end and partly incorporating remains of the Reredorter, is the
Busby Library of c.1655-60, rebuilt after war damage (for staircase and
gateway to "School" and Busby Library, see Little Dean's Yard); on the east
side of the Dormitory projects the early C.16 St. Dunstan's Chapel above
which is a chamber with square headed Perpendicular windows and a C.18
Venetian window; the outer east wall of the Dormitory is partially exposed
inside the adjoining school gymnasium with blocked medieval windows of
different shapes and date. The Dark Cloister is the vaulted passage
between the surviving walls of the Refectory and the Dormitory, C.11
contiguous with a late C.14 wall on the west side with a long timber window
of 20 mullioned lights, debouching into Little Dean's Yard.