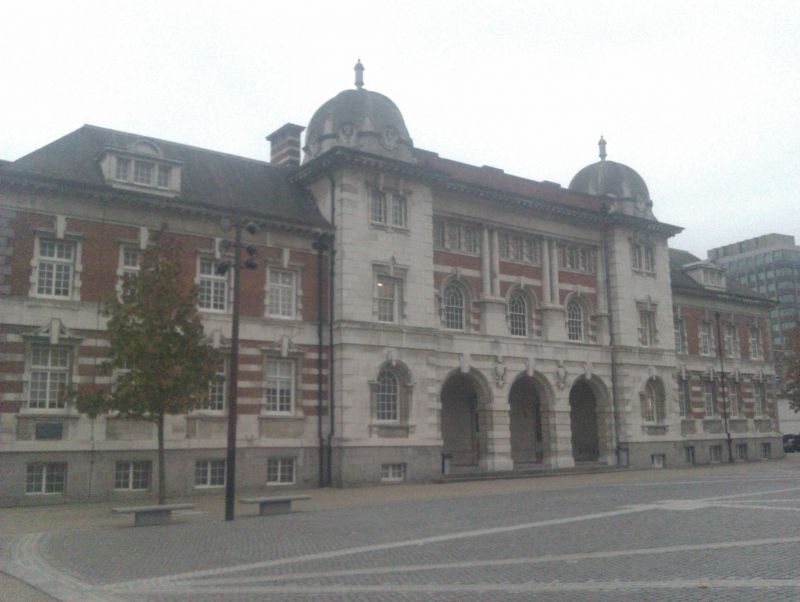 Medical college. 1904-7 by J.H.T Wood and W. Ainslie for the Royal Army Medical Corps. Strong red brick with Portland stone dressings; Westmorland slate roof; brick stacks with stone banding.
PLAN: Tall NW-facing entrance block with loggia, entrance hall and lecture theatre to centre flanked by laboratories, with single-storey classroom block to rear.
EXTERIOR: Imperial Baroque style. Principal NW elevation has 3-storey 5-bay centre linked by dentilled cornice and dominated by two domed Kentian towers of Portland stone with Gibbsian windows, which flank three inner bays with loggia arcade to an open rusticated ground floor below an engaged Ionic screen; first-floor sashes with radial heads set in Gibbsian semi-circular arched surrounds with stone band linking keystones; continuous band of attic windows with Gibbsian surrounds set below entablature. Each of the 4-bay flanking wings consist of two storeys over basement, with similar cornice and dormer window set in hipped roof: cross windows with casements set in Gibbsian surrounds with tall keystones, those to ground floor, which has continuous stone banding, with unusual swept pediment design set into heavy stone plat band. To rear is single-storey classroom block: NE return along Atterbury Street has two Gibbsian windows set between paired Ionic pilasters below segmental pediments. Plain SE elevation facing Officers' Mess (qv), which is connected to this building by covered first-floor link with upper tier of wood casements.
INTERIOR: generally plain, with inserted ceilings to classrooms and reseated lecture theatre. Mosaic floors to laboratory, half-glazed doors. Dog-leg stairs flank entrance hall, with banded green and white stone facing to walls and alternate bays of coffered segmental vaulting and groined vaulting set on dentilled cornice. First-floor library with dentilled cornice beneath panelled vaulted ceiling, and upper tier with iron balustrade set over fine set of bookcases with margin panes to glazed cupboards above panelled cupboards.
HISTORY:Subsequent to the reforms and new hospital plans which resulted from the post-Crimean War reforms, the medical services of the British army were further refined as part of the Balfour Administration's (1895-1905) updating of its structure and support services. A direct and significant result of this, and the need to combat the poor hygiene standards and disease that claimed more soldiers' lives during the Boer War than the enemy, was the complex of buildings built for the newly-formed Royal Army Medical Corps (established 1898) at Millbank. It is more directly comparable to civilian than military hospitals of the period, a reflection of the status which the RMAC had in the medical world. The college existed to instruct officers with an academic medical training: hygiene and tropical medicine were the two most important areas, where the college made a number of significant medical advances. The RAMC's keen desire to incorporate the best of modern hospital and laboratory design led them to commission Woodd and Ainslie, a civilian firm best known for their hospitals work and for whom this was their most prominent commission. The style of this building was chosen in order to complement that of the earlier barracks (qv) on the site.