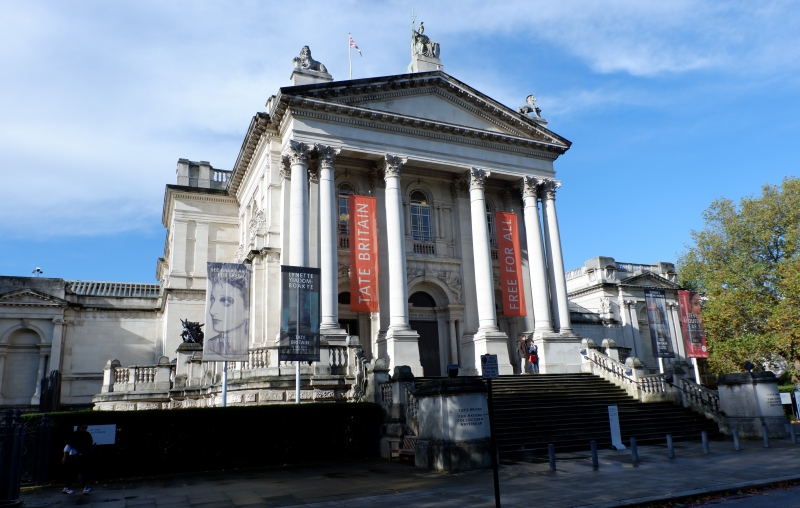 Public gallery. 1897, by Sidney R.J. Smith, additions in 1909, 1926 by W Romaine Walker, Duveen Galleries added by John Russell Pope, architect of the National Gallery in Washington DC, with Romaine Walker and Jenkins opened in 1937, 1970s rear extension in galleries 25-30 and Turner (Clore) Gallery wing to north by James Stirling (1984-85). Portland stone, glazed and leaded roofs. Late Victorian grand manner with freely handled Baroque features concentrated on portico-entrance pavilion (somewhat to the detriment of the overall composition). Symmetrically planned grid of top lit galleries with corner pavilions and central axis marked by prominent projection of porticoed entrance pavilion containing arched and vaulted vestibule followed on axis by octagonal hall and principal gallery behind, the whole raised on rusticated basement. The pedimented Corinthian portico, crowned by figures of Britannia and Lion and Unicorn, is approached by broad flight of steps with balustraded parapet swept out around the terrace enclosing the entrance pavilion. The blind flank walls have entablature and balustraded parapet broken forward over corner pilastered pavilions with modified Venetian windows. Interior has marble clad arched and vaulted vestibule and domed octagonal hall, etc; entrance hall has stained glass by E Bossanyi of 1938-41; the basement restaurant has a large mural by Rex Whistler which is one of the outstanding mural schemes of the Inter-War years; restaurant and coffee bar redesigned 1983-85 by'Jeremy Dixon. This was the first purpose-built gallery in the country devoted to national art. It was erected as the gift of Sir Henry Tate, on the site of Thomas Hardwick's Millbank Penitentiary.