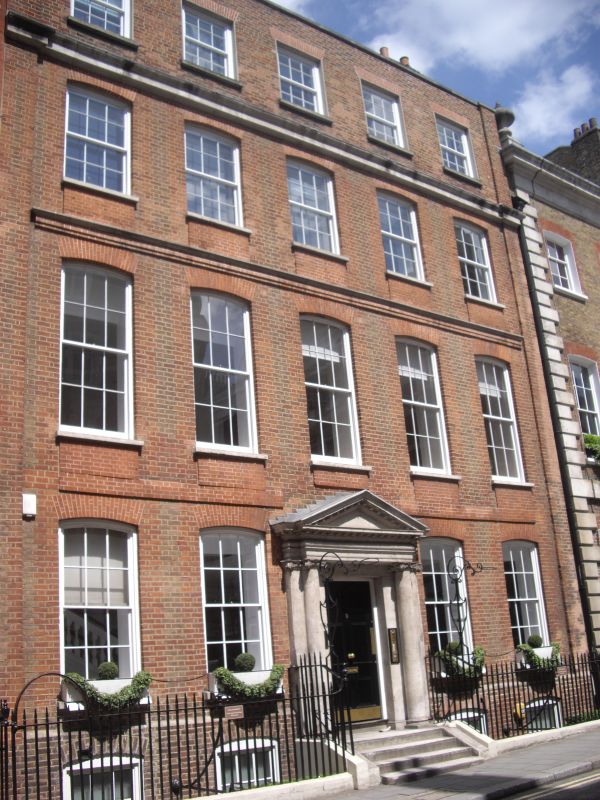 II
Terraced town house. Built 1719-21 by Benjamin Timbrell. Attic storey added before 1836. Interior reconstructed following major fire of 1988. Red brick facade.
PLAN: 3 storeys plus attic and basement. Rear wing on W side of same height as main house. Internal plan of main house comprises one front and one back room to each floor.
EXTERIOR: Symmetrical façade of 5 bays flanked by pilaster strips; central entrance. Stone doorcase with attached Ionic columns, entablature with pulvinated frieze and modillion cornice carrying triangular pediment. Gauged brick segmental arches to windows from basement to 2nd floors; flat arches to attic windows. Ist and 2nd floor windows have raised aprons. 6-over-6 pane sash windows (all reinstated after fire). Brick plat band to 1st floor, moulded brick string course to 2nd floor and moulded stone cornice at 3rd floor, parapet with coping. Wrought-iron area railings with projecting scrollwork lamp brackets to either side of entrance.
INTERIOR: Entrance hall and stair reinstated after fire, incorporating some surviving fabric. The large entrance hall occupies the whole of ground floor front room, an unusual arrangement. Enriched compartmented ceiling. Imperial stair on left (W) side has close-string designed in form of enriched entablature, thick square enriched newels and turned balusters. The stair rises through an Ionic columned screen, which is mirrored on opposite end of the hall. Original stone chimneypiece on E wall with eared architrave. Stair landing with swagged plasterwork and enriched compartmented ceiling with central octagonal compartment. Door leading to front room with eared architrave, enriched pulvinated frieze and triangular pediment. First floor front room has full-height panelling, enriched modillion cornice and decorative ceiling plasterwork, entirely reinstated after the fire. Good late C18 marble neo-classical chimneypiece. The remainder of the rooms were not reinstated and are not of special interest.
HISTORY: Clifford Street was built between 1719 and 1723 as part of the Burlington estate. No. 9 was originally occupied by the Earl of Harold, son of the Duke of Kent.
SUMMARY OF IMPORTANCE: Of special interest as a handsome, high-quality town house by Benjamin Timbrell (c1683-1754), one of the most prominent master builders working in London in the first half of the C18, who also built substantial houses in the neighbouring Grosvenor Estate. It also has important group value with No. 8 Clifford Street (qv). Listed at Grade II* in 1958, it was regraded to Grade II in 2006 to reflect the substantial loss of original interior fabric which occurred after the 1988 fire, including panelled rooms and a secondary staircase, which were not reinstated. The restoration work, which incorporates some surviving fabric, was carried out to a high standard and has reinstated some of the original grandeur of the fine principal rooms at ground and first floor.
SOURCES: Survey of London, Vol XXXII, 1963, pp 477-482.
Pevsner, The Buildings of England, London 6: Westminster, p 514.