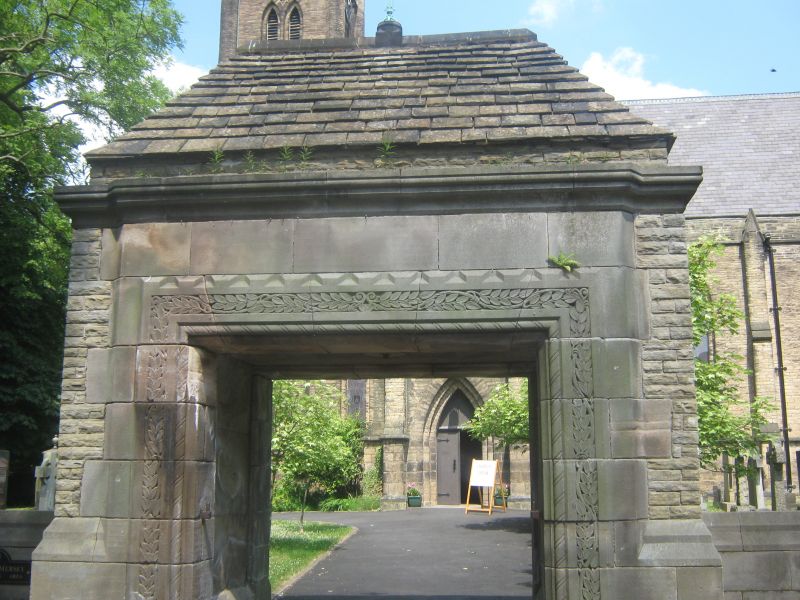 Church, 1846-50 by Peter Walker, with additions in 1891 by Preston & Vaughan and alterations in early 1990s. Built in First Pointed style in coursed large and small sandstone with ashlar dressings, with a Welsh slate roof. Chancel, north vestry, south chapel, nave with south porch, and west tower.
Chancel, under a separate roof, has a stepped three-part tall plain lancet east window with drip mouldings, and slim corner buttresses. South chapel occupying full length of chancel with monopitch roof and parapet, angle and 3 side buttresses, 2 pairs of lancet windows to south and 1 pair to east. North vestry with north-facing gable, east door and triple lancet window with transoms and a relieving arch. All 3 east end items added in 1891. Nave of 6 bays with plain lancet windows between gabled buttresses, parapet to eaves, string course at cill level between buttresses. Gabled porch on south side between first and third bays, with gabled angle buttresses, lancet arch door and quatrefoil decoration in gable. West tower has 3 stages, with lancet arch west door, single large lancet window with simple plate tracery at first floor above and 2 small lancet windows under clock in top section. North and south faces have lancet windows to ground floor and matching pair of windows to top section. Angle buttresses, parapet, pinnacles on top stage.
INTERIOR: chancel with segmental vaulted ceiling, stone reredos with blind arcading below east windows which have decorative leading. Pink and cream marble pulpit to left and wooden reading desk to right at entrance to the chancel. South chapel with similar windows to chancel, exposed roof trusses and arched openings to chancel and nave. Organ loft to north side of chancel and door to vestry, both with drop-arch openings. Nave has exposed roof trusses of slender hammer beam construction, with iron tie-bars at eaves level. 2 decorative vents in roof at ridge. Windows mainly with simple, geometric stained glass in subdued colours. Walls wood panelled below window level. At west end a raked gallery supported on 2 cast iron columns with organ loft above within the tower. Large tower window acts as west window, with subsidiary windows to each side. At ground floor, doors to porch and tower, with spiral staircase to tower in north-east angle. Numbered, gated box pews throughout majority of nave with cast iron hoops and ceramic trays for umbrellas. Octagonal stone font with pointed wooden cover under the gallery.
HISTORY: Original plans for the church show a small chancel at the east end with either a vestry or chapel in the north-east corner. This east end was replaced in 1891 by Preston & Vaughan by the current arrangement. A substantial stone lych-gate by Taylor & Young is dated 1927. Prior to the early 1990s there was a spire, but this was removed when it became unsafe and the tower was given a parapet and pinnacles at that time.
SUMMARY OF IMPORTANCE
This mid-nineteenth century church has a west tower and a well-executed and consistent early gothic style, together with a well preserved interior including gallery and box pews, making it suitable for listing at Grade II.
------------------------------------------------------------------------------~