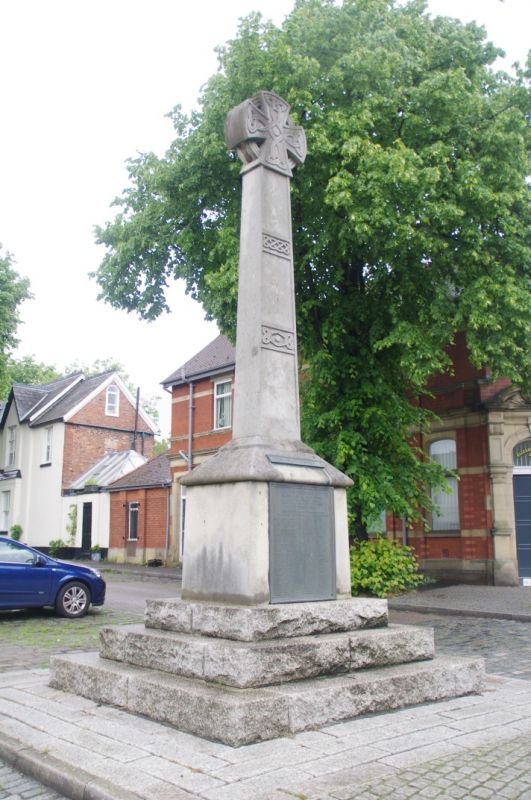 FORM
Alisée patée cross head with halo, set on a tall, tapering, rectangular section shaft. The south face is ornamented with Celtic knotwork. The cross is set on a coped pedestal which carries a First World War plaque on the southern face and a Second World War plaque on the northern face. Fixed to the coping on the southern side there is another much smaller plaque. The pedestal is raised on a flight of 3 steps so that the memorial forms a Calvary cross.

INSCRIPTIONS
South face:
IN MEMORY SACRED FOR ALL TIME OF THE HEATON MERSEY MEN WHO FELL IN THE GREAT WAR FOR THE WORLD'S FREEDOM. 'GREATER LOVE HATH NO MAN THAN THIS, THAT A MAN LAY DOWN HIS LIFE FOR HIS FRIENDS'. Followed by an alphabetical list of 72 men (surname, forename(s) without note of rank or other information).

North face:
IN THANKFUL MEMORY OF THE HEATON MERSEY MEN WHO GAVE THEIR LIVES IN THE SECOND WORLD WAR 1939-1945. Followed by an alphabetical list of 30 names (forename, surname) and then the text: GREATER LOVE HATH NO MAN THAN THIS THAT A MAN LAY DOWN HIS LIFE FOR HIS FRIENDS.

SETTING
The memorial is set in the middle of St John's Road facing the main road to the south, and is aligned with the lych gate and main entrance (the south porch) of the grade II listed Church of St John the Baptist.

HISTORY
The date of the unveiling, designer or commissioner of the monument are all unknown. The memorial is not shown on the 1:2500 map published in 1922, but it is marked on the 1934 map. The memorial's apparent deliberate placement in relationship with the lych gate might suggest that it was designed by Taylor and Young who built the lych gate in 1927.

The war memorial on St John's Road is designated at grade II for the following principal reasons:
* As a poignant reminder of the effects of tragic world events on the local community
* As a good example of a First World War memorial displaying good quality materials and craftsmanship
* For additional group value with the grade II listed Church of St John the Baptist, the monument being aligned with the lych gate and the south porch.