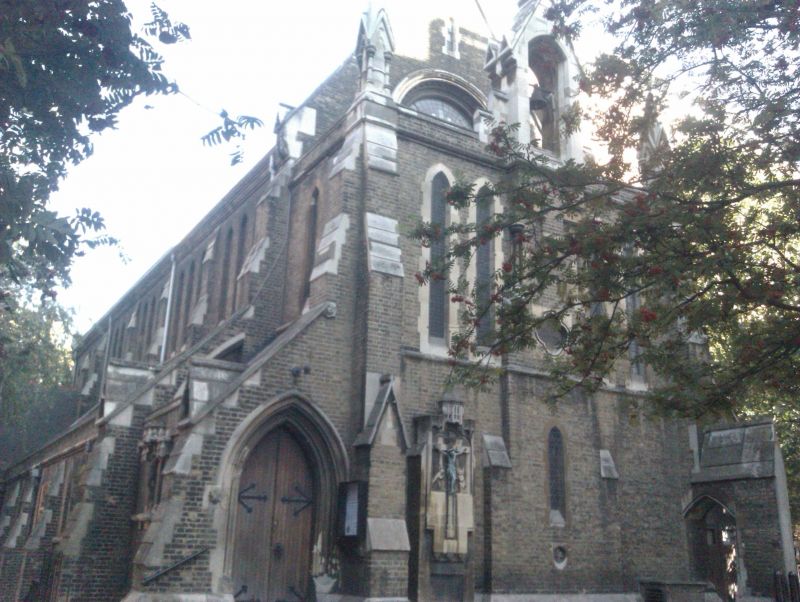 Anglican church. 1887-88. By Joseph Peacock. For the Rev.
Alfred Moore. Font said to be a design by JL Pearson. Charles
Nicholson added a rood beam, west organ loft, canopy over
altar, and other features c1913. In 1936 some fittings brought
from nearby St Jude's, which was demolished in that year.
Yellow stock brick in Flemish bond, inside with red banding;
stone dressings inside and out. Roofs of tile. Crypt.
Single-storey extension to ritual east added after 1945, not
of special interest.
EXTERIOR: chancel of two bays, north and south chapels,
treated as diminutive transepts, the latter serving originally
as an organ chamber. Aisled nave of four bays. Narthex of one
shallow bay, entered through north and south porches. Spare
Early English style with lancet lights used almost
exclusively. The most unusual feature of the outside is a
nearly full-height narthex topped by a over-scaled bellcote,
the gabled roof of the west end rising behind and pierced by a
simple roundel. Consecration cross set in west face of
narthex; Great War Memorial Cross to west of north porch
entrance. Clerestory with four lancets to each bay, the aisled
bays below with two lancets each. Transept faces with two
lancets below rose window. East end of five lancets.
The exterior has a quirky and aggressive style that is
associated with Peacock.
INTERIOR: the interior, by contrast, is very spare and
elegant, the proportions subtly adjusted; the nave is
exceptionally broad for its length and the aisles very wide.
Elevated choir and sanctuary, paved with red and black tiles
set diagonally; enclosed by simply wood screen which may be
attributed to Nicholson. Painted wood canopy over site of
original altar, which has been brought forward by
approximately one metre. Otherwise the liturgical setting has
not been modernised. Along sill of east window a blind stone
arcade, painted, the blank areas filled with paintings which
have slightly faded. Chancel arch ends in unusual corbel
stops; painted rood beam with figures intact, sitting just
west of chancel arch. Metal gates and screens to side chapels,
that to north with sanctuary of one shallow bay lit by
tripartite east window filled with glass depicting the Virgin
Mary; the stone of the window painted and blind side lights

filled with adoring angels; this said to have been partially
repainted in the 1970s but to an original design. Nave paved
with wood blocks, set herringbone fashion along line of
central aisle. There are moveable benches to nave of
exceptionally fine late Victorian design; the wood pulpit at
ritual north-east is of a Jacobean design and may incorporate
early C17 woodwork. There is a boarded, pointed barrel vault
to the chancel; lean-to roofs to nave aisles carried on
pointed transverse arches irregularly set; one of the great
glories of the interior is the braced king post roof in which
the common rafters form scissor braces to the king post
purlin. The west end of the nave is spanned by a single
overscaled pointed arch, the spandrels pierced by one roundel
each; the narthex set off under this arch, its west wall
treated as 3-bay blank arcade, the centre recess of which
serves as Baptistery. West organ gallery installed under west
arch; its console moved early 1990s to north-west corner of
the nave. Most glass opaque except for east window, north
chapel, already noted, and two windows in the south aisle,
east end. Mosaic Stations of the Cross fixed to the walls.