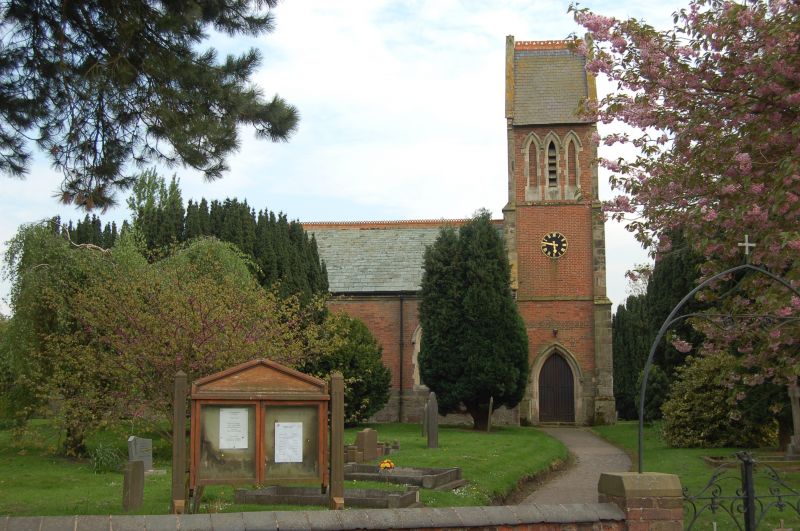 Church. Rebuilt 1764 and Gothicized in 1867 by H. Goddard & Son. Brick with
limestone dressings, including plinth which may be the relic of a Mediaeval
building, Swithland Slate Roofs with cresting. West tower nave and chancel.
West tower entirely of 1867 with clasping buttresses, western lancet and
quatrefoil above, tripartite arcading to bell chamber, the outer lower arches
blind. Saddleback roof of Welsh slate with ridge cresting. Door in its north
wall. South arcade has paired trefoiled lights with hoodmoulds. Gabled
vestry to south of chancel which has east window of 3 lights with roundels.
Narrow lancet in north wall of chancel. Plain interior: tower arch rids
stilted outer chamfer and hoodmould, and this detail is reflected in the
chancel arch also. Elaborate nave roof of kingpost construction with ornate
tracery filling the spandrels and inscriptions on the west and east tie
beams. Chancel roof has scissor braced common rafters. Furnishings date from
the restoration of 1867: pews, stone pulpit and font. Encaustic floor tiles
to chancel, and altar rails with cusped tracery. Stained glass: north window
by Theodora Salisbury of 1920, a war memorial depicting Saints Gabriel and
Michael, and in the chancel north wall two saints in the lancets, Mediaeval
style, 1909. Simple emblems and flower quarries in east window.