Barn to the North of Queen Court Farmhouse 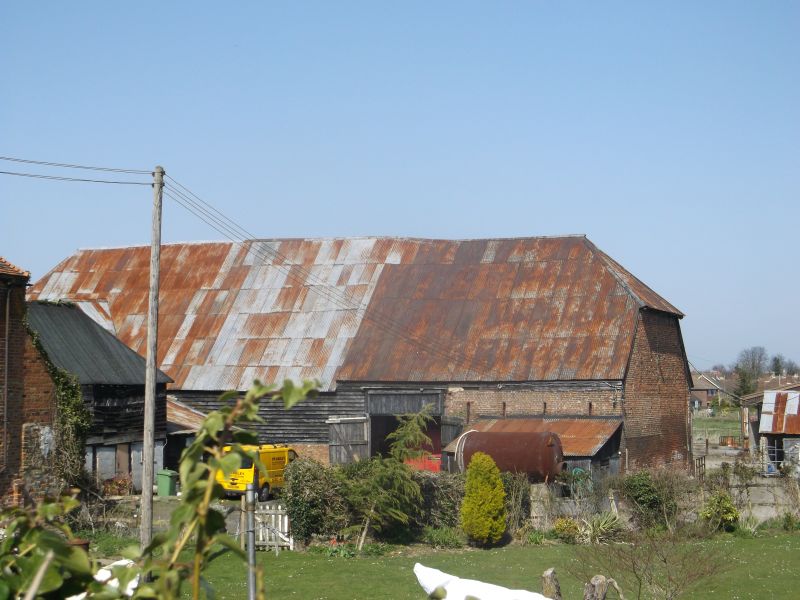 Entry Name: Barn to the North of Queen Court Farmhouse

Barn, thought to date from the C15, with two bays thought to date from the late C17 or early C18; there is an attached granary, probably also of late-C17 or early-C18 date. The entire site is listed at Grade II* as being of more than special interest; however, the principal focus of more than special interest is on the C15 part of the building, whilst the link block between the barn and the granary is of lesser interest.

Barn, thought to date from the C15, with two bays thought to date from the late C17 or early C18; there is an attached granary, probably also of late-C17 or early-C18 date. The entire building is listed at Grade II* as being of more than special interest; however, the principal focus of more than special interest is on the C15 part of the building, whilst the link block between the barn and the granary is of lesser interest.

MATERIALS: the original part of the barn is timber-framed, on a brick plinth of very varying heights. The walls are weather-boarded, the majority of the boards appearing to be modern softwood, with a few oak or elm boards surviving in places. The eastern part of the barn is also timber-framed, on a taller brick wall accommodating the fall in ground level, with the eastern end being entirely of red brick, laid in English bond. The roof is hipped to the west and half-hipped to the east, the thatch now replaced by corrugated metal. The floors are covered with concrete.

PLAN: the rectangular barn stands on an east/west alignment, and measures approximately 33m by 11m. It has been suggested that the barn was originally of five bays, aisled on both sides; in its current form, the building comprises six bays of approximately equal length, with the western bay representing the terminal outshot, and two later bays to the east. The granary stands to the south on a north/south alignment, and is joined to the barn externally by a link block projecting from the centre of the barn’s south elevation.

EXTERIOR: there is a wide wagon opening in the south elevation to the second bay, with a replacement gabled porch thought to date from the C17 or C18; the doors are later. There is a smaller pedestrian entrance adjacent to the east. In the westernmost bay is a modern entrance, with double doors. The third bay is obscured by the projecting granary extension. At the eastern end of the barn, the brick plinth to the original fourth bay appears to have been at least partially rebuilt. The fifth bay and sixth bays represent the later section of the barn, with a tall opening to the fifth bay, containing modern doors. The eastern end of the barn is entirely of brickwork, having a late-C17 or early-C18 character, the walls being generously provided with ventilation slits in two rows to north and south and three rows to the gable end, the majority now bricked up internally. There is an offset plinth. On the north elevation there is another C20 lean-to against the east end, though the brickwork remains visible within, the lower part being painted. To the west, the tall brick plinth reflects the fall of the ground to the north, the brickwork apparently having been reconstructed in the C19. Beneath the eaves towards the west end of the barn is an opening, possibly originally a pitching door or reduced winnowing opening.

INTERIOR: the original part of the aisled barn is of four bays, the westernmost comprising a cantilevered half bay and terminal outshot. The frame is regular in form, with bay divisions marked by slightly jowled arcade posts, having curved braces to the tie beam and arcade plate, and with aisle ties to the aisle plate. Downward aisle shores are trenched over the aisle ties and descend to the transverse post plates on brick sill walls. At the west end an axial post, with aisle shore, supports a terminal tie beam, carried on the ends of the arcade plates. The roof is supported by crown posts, each having downward braces to the tie beam and upward braces to the collar purlin. There are ten common collar-rafter couples to each bay. Additional strength is given to the frame by shores at the centres of the bays, thought to be a later insertion, possibly contemporary with the eastern rebuilding; straighter than the aisle shores, these are tied into the aisle plate with short spur ties but apparently only bird-mouthed into the arcade plate, with metal plates added in this position. The intermediate shores support a slender purlin, absent in places, which is also supported by the aisle shores, with an added short tie; the purlin possibly intended to provided extra support to the rafters over the aisles. There is no intermediate shore in the third bay, on the south side of the barn. The scarfing of the arcade plates is placed directly over the posts, the joints being side-halved and bridled. The wall framing consists of regularly spaced studs between jowled wall posts. The vast majority of the timber frame survives, though there has been some replacement in softwood. In addition, there have been a number of interventions, with metal reinforcement, braces nailed to the underside of common rafters, and some reinforcement to the sill beam. In the entrance bay, the braces from the arcade posts to the arcade plate appear to have been selected for their particularly cranked profile, allowing greater room for wagons. The later gabled porch has been tied into the main structure, with a re-used collar.

The division between the original part of the barn and the lower, late-C17/early-C18 section to the east is marked by the fourth truss. The crown post of this truss has been compromised, with later straight downward braces and a new upward brace to the west. The barn’s fifth truss has raking struts in place of the crown post; the braces from the posts are straight, and there are downward braces to the aisle plate rather than shores. The aisle plate, or wall plate, continues round the gable wall, resting on an offset on the brickwork. The timbers in this part of the barn are more slender than in the earlier part, and are nailed rather than pegged, whilst there has been considerable adjustment and reinforcement to the structure. The tall portal to the south has an integral slot on each side designed for planking to retain the grain during threshing.

The attached granary to the south is timber-framed, on a flint wall, accommodating the drop in level to the east. The framing is clad in weatherboarding. There is a central doorway to the western elevation. To the east, the building may originally have been open-fronted, the frame being supported on timber posts at ground-floor level; these are now in-filled with cement blockwork, with two door openings. The roof is covered with asphalt. The building has two cells at ground-floor level, within which the jowled posts, roughly chamfered transverse beams with run-out stops, and joists are exposed. The first floor was not inspected, but it is understood that the timber frame is visible, with shaped jowled posts, and tie-beams supporting a collar rafter roof with a single purlin, and with no ridge board. Evidence of internal grain bins remains, some retaining elm boards.

The link block between the barn and the granary has a brick wall to the west, irregularly bonded; the flint to the lower part is visible from within the building to the east. The wall is probably C19. The eastern wall, which appears to be C20, is weatherboarded, and there is a C20 mono-pitched roof.

According to Hasted’s ‘The History and Topographical Survey of the County of Kent’ (1798), the site of the current Queen Court Farm formed part of the possessions of Odo, Bishop of Bayeux at the time of the Domesday survey, but by 1214 the manor of Ospringe had passed to the Crown. Having been granted by Henry III to Hubert de Burgh, Earl of Kent, and his wife Margaret for their lifetime, the manor was granted to the trustees of Henry’s intended queen Eleanor as a dower. The manor continued in the possession of the queens of England, becoming known as ‘Queen Court’ by at least 1299. However, soon after 1317, the manor of ‘Queencourt’ appears to have been divided into two distinct manors, granted separately, becoming a single manor again, granted to Sir Thomas Cheney, in 1550. In that year there is a reference to a ‘mansion of Queen-Court’, presumably referring to the extant farmhouse. In 1572 the whole ‘manor of Ospringe, alias Queen-court’ was sold to a Richard Thornhill, and a number of different owners are recorded through the C17 and C18.

The ‘Great Barn’ appears to have lost one or more of its original bays, probably in the late C17 or early C18; this may be the result of rebuilding due to subsidence, the ground dropping considerably to the east. The east end of the barn, now comprising two bays, has been rebuilt in brick. Attached to the south elevation of the barn is a granary, which is not shown on the Tithe map of 1840, though stylistic evidence suggests a late-C17 or early-C18 date; the building may therefore incorporate re-used fabric, or may have been relocated from elsewhere.

The site contains a number of later agricultural buildings, mainly located to the north and east of the historic group.

The barn to the north of Queen Court Farmhouse is listed at Grade II* for the following principal reasons:

* as a C15 Kentish barn, characteristic of its type and date;
* despite the later replacement of the east end, the majority of the structure is remarkably regular and intact, and illustrative of contemporary construction;
* though of somewhat lesser interest, the attached late-C17/early-C18 timber-framed granary contributes to understanding of the development of the agricultural site.

* the barn represents an important element of a rare and illustrative early farm complex.

* with the adjacent C16 barn, listed at Grade II, and with the Grade II*-listed C15 farmhouse, as well as with the farm’s Grade II-listed C18 carthouse.