Barn to the North West of Queen Court Farmhouse 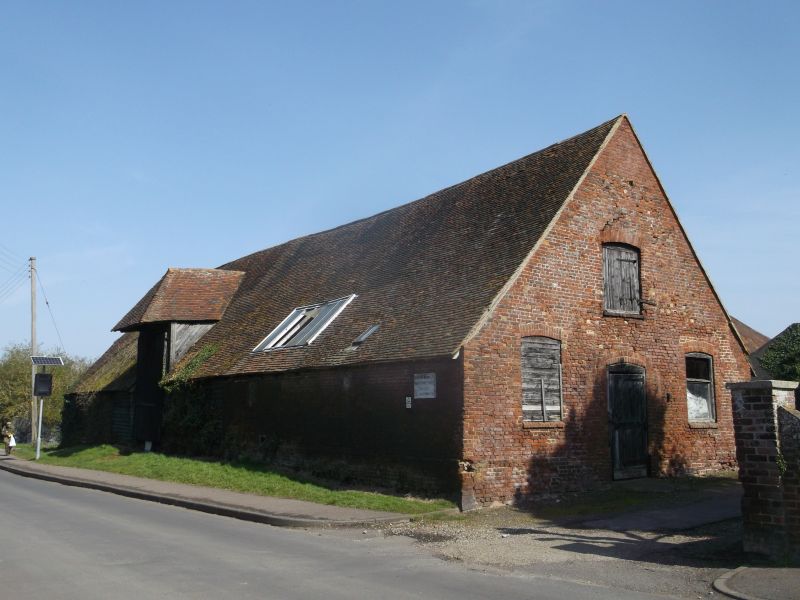 Barn, thought to date from the C16, and possibly extended in the C17, with a stable installed in the C19.

Barn, thought to date from the C16, the southern section possibly an extension of the C17, with some rebuilding in brick, and with a stable installed in the C19.

MATERIALS: the timber frame is clad with weatherboarding to the northern three bays, the majority being modern, with some older boards surviving. The southern bays have been clad in red brick, laid in English bond. The roof – half-hipped to the north end – is covered with clay tiles, with asbestos sheeting to the eastern side of the northernmost bay; there are modern lights cut into the roof. The barn’s doors are replacements, of varying ages. Except in the southernmost stable bay, the floors are covered with concrete.

PLAN: the rectangular barn stands on a north/south alignment, with Water Lane running alongside to the west, and the yard to the east. The building is currently of six bays. It is thought that the four northern bays represent the original C16 barn, with the two southern bays probably having been added in the C17, and the stable installed in the southernmost bay in the C19. The building is now partitioned into three sections, besides the stable to the south, the fourth and fifth bays were converted to workshop use in the C20.

EXTERIOR: the building has opposing openings in the third bay to the north, with a tall porch to the west; the roof structure of the porch has mortices for lost brackets. The lower opening to the east appears originally to have contained a narrower winnowing door in place of the current double doors. In the eastern elevation the fourth bay also has an opening with double doors, immediately to the north of the brick section. The half-hipped north end of the barn has a later pitching window. The southern end has a narrow central doorway, with a window to either side and a door to the hayloft above; all openings have segmental-arched heads. In the eastern wall there is a horizontal window below the eaves, lighting the stable.

INTERIOR: the three intact bays to the north demonstrate the original aisled form of the barn, with bay divisions marked by slightly jowled arcade posts, having curved braces to the tie beam and arcade plate (those to the arcade plate being slightly straighter), and with aisle ties to the aisle plate. The arcade plates have side-halved and bridled scarf joints above the posts. The tie beams are stop-chamfered. Downward aisle shores are trenched over the aisle ties and descend to the transverse post plates, which now sit at floor level, owing to the floor having been raised. Above the tie beam queen struts rise to a collar clasping the purlins, with short windbraces between the purlins and principal rafters; there are intermediate collars between the trusses. There has been considerable replacement of common rafters below the arcade plate. The wall framing consists of regularly placed studs between jowled wall posts; the majority of the original studs survive. The aisles are divided by timber partitions to the lower part of the trusses, residual in places. The truss at the northern gable end has a mid-rail between the posts, and curved downward braces trenched across the mid-rail. In the third bay, the wall-plates of the porch structure are pegged to the arcade plate. On the other side, the aisle plate above the opening has empty mortices suggesting that the opening has been reduced. A boarded partition with double doors separates the northern three bays from the area immediately to the south, the truss form remaining intact.

Bays four and five are currently fitted out as a workshop; the roof could not be inspected above arcade plate/tie-beam level due to an inserted ceiling. The truss between the bays appears formerly to have been closed, and may have been the end of the original barn, or otherwise have formed a partition: the posts have mortices for a mid-rail, and the aisle ties have mortices for studs, whilst there is no evidence of downward shores; however, there are upward braces between post and tie beam, rather than downward braces as at the north end of the barn. There is a plain side-halved scarf joint over the western post. The framing to the south of this point continues in essentially the same form, without downward shores. There is some secondary bracing to this area.

Bay six, the southernmost bay, contains the C19 stabling, with two stalls, a loose box, and harness room. The boarded partitions and posts are intact, with a door with metal bars to the loose box, and there are surviving fitted mangers along the north wall of the stalls, and in the corner of the loose box, with timber hay racks above. The north wall is formed by the boarded partition. The floor is of brick. A fixed ladder to the south gives access to the hayloft. The pegged roof structure over the hayloft takes much the same form as that over the first three bays, without windbracing; strengthening timbers having been added to the backs of the rafters, together with a ridge piece.

According to Hasted’s ‘The History and Topographical Survey of the County of Kent’ (1798), the site of the current Queen Court Farm formed part of the possessions of Odo, Bishop of Bayeux at the time of the Domesday survey, but by 1214 the manor of Ospringe had passed to the Crown. Having been granted by Henry III to Hubert de Burgh, Earl of Kent, and his wife Margaret for their lifetime, the manor was granted to the trustees of Henry’s intended queen Eleanor as a dower. The manor continued in the possession of the queens of England, becoming known as ‘Queen Court’ by at least 1299. However, soon after 1317, the manor of ‘Queencourt’ appears to have been divided into two distinct manors, granted separately, becoming a single manor again, granted to Sir Thomas Cheney, in 1550. In that year there is a reference to a ‘mansion of Queen-Court’, presumably referring to the extant farmhouse. In 1572 the whole ‘manor of Ospringe, alias Queen-court’ was sold to a Richard Thornhill, and a number of different owners are recorded through the C17 and C18.

It has been suggested that Building 1 was extended by two bays in the C17, rather than forming part of the original structure, with alteration. These southern bays were clad in brick in the C18 or early C19, with the southernmost bay fitted out as a stable during the C19.

The site contains a number of later agricultural buildings, mainly located to the north and east of the historic group.

The barn to the north-west of Queen Court Farmhouse is listed at Grade II for the following principal reasons:

* as a C16 Kentish barn, the intact timber frame of the northern section demonstrating characteristics of its type and date;
* the southernmost section contains well-preserved C19 stable fittings.

* with the adjacent C15 barn, listed at Grade II*, and with the C15 farmhouse, also Grade II*, as well as with the farm’s Grade II-listed C18 carthouse.