A Grade II* Listed Building in Craswall, County of Herefordshire 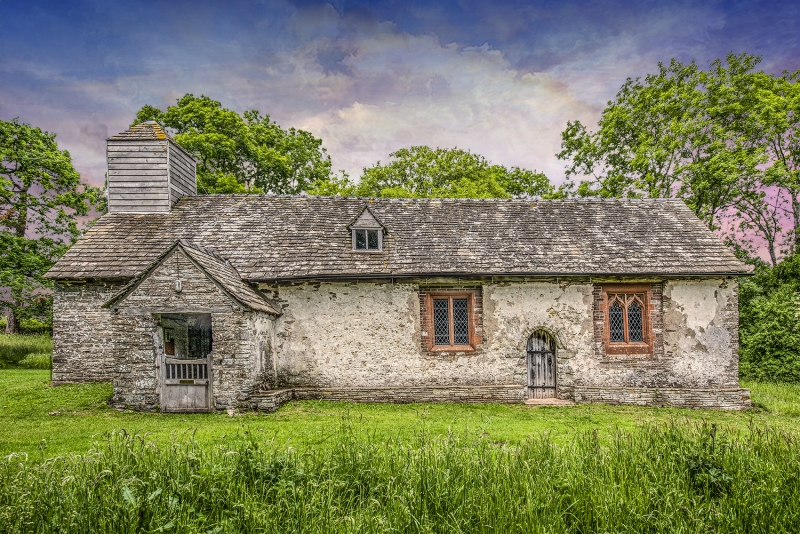 Parish church. Early C15, C17 south porch, internal wall separating
western part of nave probably of C18, restored 1883. Sandstone rubble,
timber-framed bell turret with weatherboard cladding, stone slate roofs.
Nave with bell turret and south porch, chancel. Nave and chancel of six
bays; west bell turret with pyramidal roof; south front, small gabled
dormer with casement window toward centre, one square-headed window
opening to left and two similar square-headed 2-light windows of 1883
restoration to right of gabled C17 south porch; C15 inner doorway with
moulded jambs and 3-centred head; the two windows to right flank a further
doorway probably of C15 date with chamfered jambs and 2-centred head;
early C15 square-headed east window survives with three cinquefoiled-ogee-
headed lights, no windows on north wall with only traces of one blocked
square-headed window on exterior at eastern end; continuous stone bench
runs along the east and south sides of the chancel and the east side of
the south porch. Interior: two western bays of nave are separated from
the remainder of the church by the added wall and now used as a vestry,
access through south porch and through a later square-headed doorway in
interior, formerly an arched opening; renewed roof presumably contemporary
with dividing wall; remaining four bays of nave and chancel with braced
collar-beam trusses blocked below the trusses may indicate the former
existence of tie-beams, three rough tie-beams have been added at a later
date, soffit of roof is boarded, traces of painted foliage decoration
survive on purlins of eastern bay; moulded and embattled wall-plate. To
west of nave against inserted wall is a C18 wooden gallery lit by the
dormer window; south wall of chancel, piscina with two drains not in situ;
church retains two C18 oak communion tables; font of 1912. The east window
and piscina are reputed to have come from Craswall Priory. The vestry
was used as a school room during C19. To the north of the church is a
shallow rectangular depression said to have been a Fives Court; to the
north-west is a further depression said to have been used as a cockpit.
[BOE, p 107; RCHM Vol I, p 42).