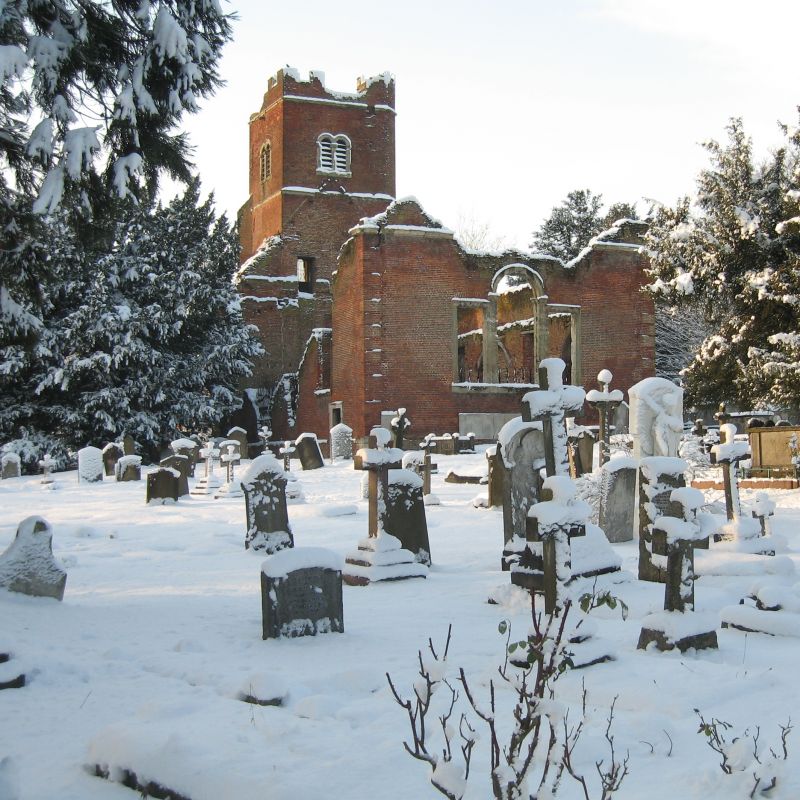 The church of St John the Evangelist, Great Stanmore. 1632, attributed to Nicholas Stone. Red brick with Portland stone dressings. Rectangular plan with west tower. EXTERIOR: Three-stage tower with diagonal buttresses, an arched door with blocked quoins, arched window openings (paired at the upper stage) with stone surrounds, and stair tower to the north-east corner; reinforced with later massive brick buttresses. Side walls partially survive; tall framed
rectangular window openings (some blocked or altered) with wooden mullion and transoms; single storey two-stage brick mortuary chapel attached to north side, with blind arched panels and stepped dentil cornice. Door case with stone surround to south side, east end; arched door at west end of south side with rusticated jambs. Moulded stone string-course survives in part; the battlemented parapet has been removed, along with most of the eastern gable. East end has a Venetian window of stone below a moulded string course, and angle quoins of brick. INTERIOR: numerous memorials and ledger slabs were retained and placed inside the tower. The Gothic Hollond tomb of 1867 was built (of red sandstone and marble) in the centre of the former nave, together with other Victorian graves. The interior was paved over with stone flags in 1991-2. HISTORY: Consecrated in 1632 by Archbishop William Laud (then Bishop of London), this church replaced an earlier medieval building and was paid for by the City merchant adventurer Sir John Wolstenholme. Nicholas Stone, Master Mason to Charles I, was paid for a font and supplying a porch here. The coffin of the 4th Earl of Aberdeen, Prime Minister in 1852-55, is deposited in a vault here. It was replaced in its turn by the 1849 church located nearby, and unroofed at that time. A highly picturesque ruin, and of architectural importance as an example of Caroline classicism, showing the impact of Inigo Jones. Churches of this period are relatively few.