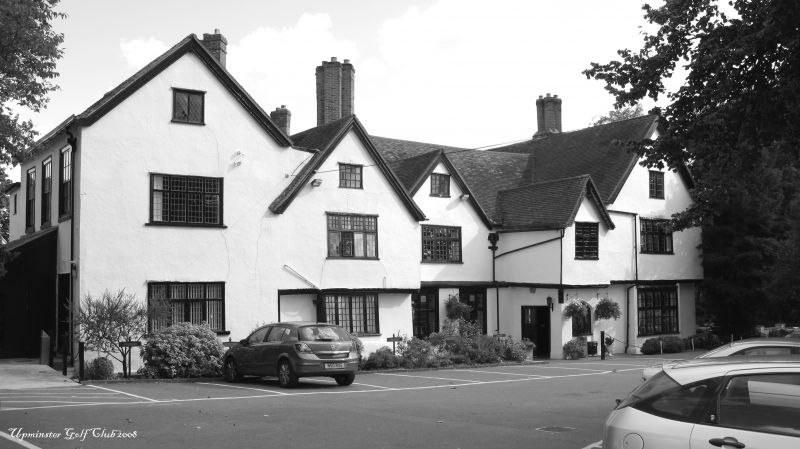 HALL LANE
1.
5017
Upminster
Upminster Hall
TQ 58 NE 13/9 7.1.55
II*
2.
C15-16. Two storey, timber-framed, and covered with roughcast colourwashed.
Consisting of a centre with cross-wings and a further wing attached to the
north end of the house. The cross-wings are gabled and jettied over the ground
floor where there are traditional wood oriel windows on brick bases. Upper
floors have wooden mullion and transom windows with leaded lights; that
in the north cross-wing an old 4-light one, with a modern 5-light window in
the south cross-wing, 2-light leaded casements in each of the gables, carved
wooden bargeboards. To north of south projecting wing 2 storey porch, jettied
on 2 sides and with shaped bracket to dragon-beam. Entrance on north side
of porch. Front of porch with 4-centred arch over modern window. Moulding
to overhang. Three-light mullion and transom window in upper floor of porch.
Gable with old carved bargeboards and pendant. Centre of the house has 3-light
mullion and transom window to ground floor and 1 old 4-light window to 1st
floor. Gable over with carved bargeboards. Old tile roofs. Main stack to
north of centre with 4 diagonal shafts. Wing to north probably C17, with
old 4-light wood mullion and transom windows with leaded lights. The ground
floor window modern, 2-light casement window in gable which is of shallower
pitch than the rest of the roofs. Stack to south of roof of gable with 2
diagonal shafts. South wing has stack with 4 diagonal shafts. Plain 2 storey
south side with various wood mullion and transom windows, all modern. Rear
elevation has modern single storey portion to south and across centre of main
block. North section has 2 storey gabled jettied wing with 4-light wooden
casements to each floor and steep gable with plain bargeboards. Remainder
of rear part set back with various gables and windows of similar character
to rest of house. First floor central rear window has a canted bay with ogee
roof possibly C17, altered. Remains of wood bellcote on roof. North side
has 3 sashes to each floor.
Interior: Porch opens into site of screens passage, both walls of which have
been removed. The ground floor of the south wing is all 1 room. Hall has
modest C18 plaster panelling cornice, stone fireplace surround and paving.
Ceiling has exposed beams, including some with gouged chamfered mouldings.
Staircase constructed round a well, off the north-east corner of the hall,
early C18 with 3 delicately turned balusters of 3 types to each tread, cut
strings, carved brackets and ramped handrail. Ceiling with simple coved cornice.
North-east room of 1st floor with simple C18 Chinese fret dado. (RCHM3).