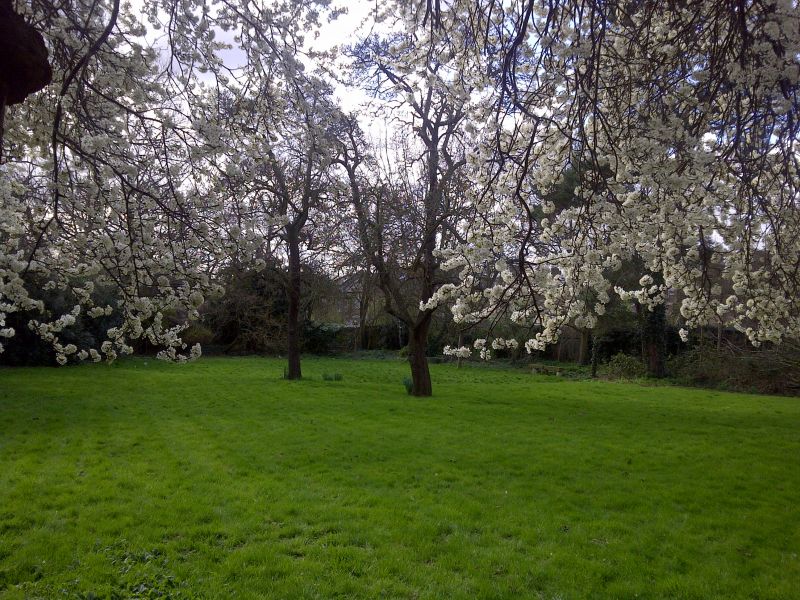 2.
Built between 1691 and 1699, on land bought by John Smith from the
widow of Christopher Boone whose house stood just to the North.
Later additions, Main house of 2 storeys, attic and basement, 5
windows. High pitched. double span roof, renewed in machine tile,
with 3 flat dormers. Now stuccoed, with modified entablature and
coved eaves cornice. lst floor bard. Moulded architraves to replaced sash
windows. l-storey left entrance link, with Doric porch, to set back, mid C19
addition of 2 storeys, 4 windows. Stucco, with slated roof of moderate pitched
[Other extensions are C20 and not included.] Cl9 glass covered way on
cast iron posts, from porch to street gate. Inside, panelled hall and
staircase with solid string and replaced balusters. Square newel posts
have carved finials with great heads of flowers and fruit, imported
(some say from Boone's house, where Grinling Gibbons was employed in
carving). One long fully panelled ground floor room. Plaster ceiling
of landing has raised border with mistletoe pattern. Ceiling of lst
floor library has raised border of fruit and flowers, rounded at ends,
with leaf and flower panels in spandrels Some exposed timbers and
old fioorboards in attic. House belonged in C18 to Mathew Smith, Major
of the Tower of London; and in early Cl9 to Admiral Sir George Martin
who served under Nelson.