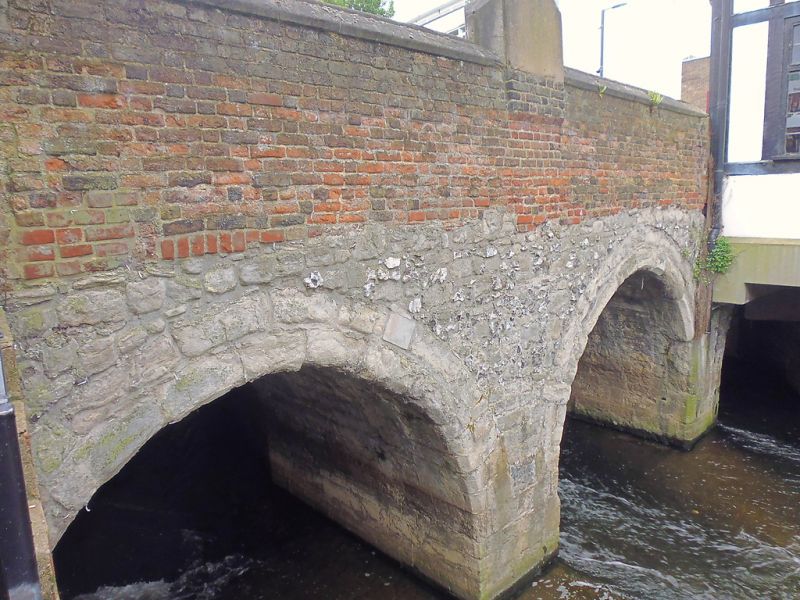 Bridge over the Hogsmill River. Late C12 with later alterations, widened c1758 and in 1852.

Nos.12 and 14 High Street, which project over and abut the south-western arch of the medieval bridge, are not included in the listing.

Bridge over the Hogsmill River. Late C12 with later alterations, widened c1758 and in 1852.

The north side of the bridge comprises three slightly stilted C12 stone arches, each built of two courses of ashlar above which is rubble and flint filling. The upper part and parapet is an 18th century addition and is of red brick with stone coping, which rises to a central panel above which is the base of an octagonal stone shaft. The south side of the bridge was extended in the 18th and 19th centuries. The C19 south face of the bridge has three round arches in brick with stone dressings, and is articulated by stone half columns with cubic capitals, each surmounted by a column with a scallop capital. Between the columns, which form the parapet, are cast iron railings with alternating columnar shafts and two tiers of cusped circles. There are repaired or added cutwaters on the south side.

Kingston upon Thames, historically in Surrey, was an important market town, port and river crossing from the early medieval period, while there is evidence of Saxon settlement and of activity dating from the prehistoric period and of Roman occupation. It is close to the important historic royal estates at Hampton Court, Bushy Park, Richmond and Richmond Park. The old core of the town, around All Saints Church (C14 and C15, on an earlier site) and Market Place, with its recognisably medieval street pattern, is ‘the best preserved of its type in outer London’ (Pevsner and Cherry, London: South, 1983 p.307). Kingston thrived first as an agricultural and market town and on its historic industries of malting, brewing and tanning, salmon fishing and timber exporting, before expanding rapidly as a suburb after the arrival of the railway in the 1860s. In the later C19 it become a centre of local government, and in the early C20 became an important shopping and commercial centre. Its rich diversity of buildings and structures from all periods reflect the multi-facetted development of the town.

In the late 12th century, the Saxon ‘Clatrung Bridge’ was replaced by a new bridge crossing the Hogsmill River. In 1758 the Court of Assembly voted towards 'widening and enlarging Clattering Bridge'. The brick parapet was taken down to road level, and the bridge was extended southwards by three red brick arches 7m wide. These were built beside the existing stone arches, and bonded into them, a brick parapet was raised on the southern side of the bridge, and one footpath was constructed. In 1852, the bridge was still further widened on the southern side by the addition of three more arches. At the same time an ornamental railing was set up in place of the brick parapet, and this further enlarged bridge became known as Clattern Bridge.

Clattern Bridge, late C12 with later alterations, widened c1758 and in 1852 is listed at Grade I for the following principal reasons:

* Structural interest: a triple-arched C12 stone bridge at the southern approach to the medieval town, widened and thereby enclosing a C18 core behind a C19 eastern face;

* Historic interest: the continued use of the river crossing from at least the Saxon period, where it crosses the Hogsmill River, which was an important watercourse from the Roman to the post-medieval period, and site of the industrial quarter and wharfs.