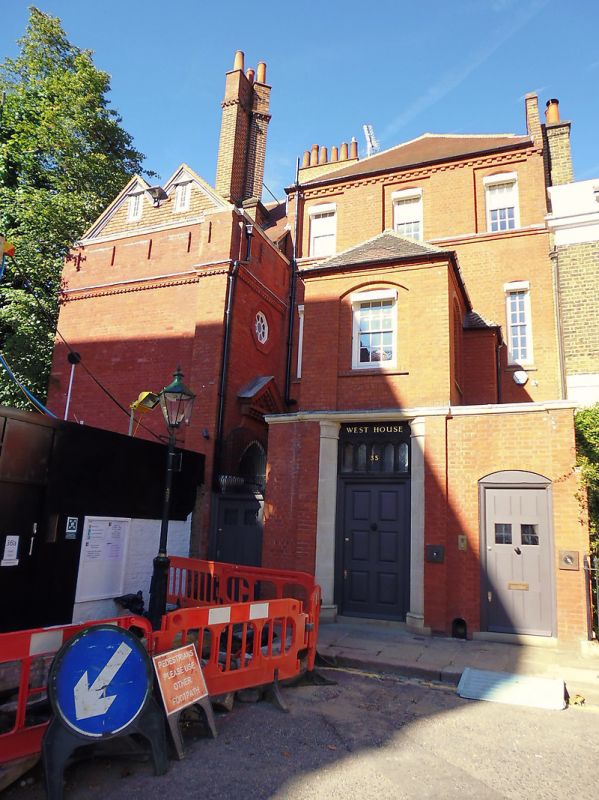 Detached house, originally house with artist's studio. 1868-9, architect Philip Webb, for the artist G P Boyce (d. 1897). This was extended to the west by one bay and some alterations made by Philip Webb in matching style in 1876 and the house was extended by one bay to the north and some internal alterations made in 1901, architect not known at time of inspection. EXTERIOR: Built of red brick in Flemish bond with plaintiled roofs and three tall brick stacks, one triangular-shaped. Original wing of three storeys and basement: irregular fenestration. Entrance or south front has 1868-9 building to right. Modillion eaves cornice. Second floor has three cambered headed sashes of 12-panes with brick panels between and moulded brick band below. First floor has two very narrow cambered 12-pane sashes at the sides and in centre top of projecting two storey porch with hipped tiled roof and cambered 12-pane sash to front and sides. Central doorcase with stone octagonal Bath stone half columns and wooden fanlight with 5 elliptical lights. Five plank oak door was added c1901, the original being an 8-panelled Georgian style door. Wall footscraper. To the right the brick wall continues with cambered doorcase with 8 flush panels, 2 glazed, which formed a tradesmen's entrance. Projecting on the south west corner of the main front is Webb's addition of 1876 of two storeys and attics red brick with imitation crenellation, end pilaster and M-shaped linked tile-hung gables with casement windows. North east facing wall of this wing has octagonal window on first floor and below a brick pediment with pointed arched opening below with vaults supported on stone impost blocks. Attached to corner nearest street is a wooden doorcase with iron grilles to two upper panels. South west or garden front is of two to three storeys and basement; irregular fenestration. To extreme right is arched entrance of 1876 addition. To left of this is a two storeyed canted bay with sash windows and pilasters added by Philip Webb in 1876. Central first floor balcony to original studio has plain iron handrail with spikes to deter robbers. Narrow sashes on either side. Ground floor has 12-pane sash and French window and the basement has two 12-pane sashes. To the north west is the 1901 wing of one bay, also in red brick. This has a gable with kneelers and casement to attic, 5-light casement below and canted bay to ground floor with full-height windows. INTERIOR: Little altered interior includes the following features. Boyce's Dining Room has fireplace with wooden architrave and metal firegrate, round-headed alcove, window seat and built-in bookcases. Boyce's Parlour has dado moulding and 6-panelled door. Staircase Hall is panelled with an oak well staircase, originally with solid handrail but at time of survey had balusters taken from the gallery of the original artist's studio. At first floor level there is a Gothic arch in front of the alcove formed by the top floor of the porch. Boyce's Bedroom includes stone fireplace, panelling and windowseat. The adjoining Dressing Room has a stone fireplace lined with C17 English tiles. Former studio has a gallery supported on three C15 style octagonal posts with headbraces originally painted with decoration of acanthus leaves. At time of survey a suspended ceiling masked the original higher ceiling with skylight. Gothic style wooden fireplace. Back staircase with stick balusters. Basement has unusually intact offices including china cupboard, tiled kitchen with built-in cupboards, large walk-in larder with slate shelves and stone fireplace to Housekeeper's Parlour. Tradesmen's entrance retains original wooden bench. West House is one of the earliest examples of the Queen Anne Revival style with interesting juxtaposition of the new style's hipped roof, symmetrical sash windows and fanlight to front door with the Gothic style Studio gallery, Gothic arch to Staircase Hall and archway to 1876 wing.