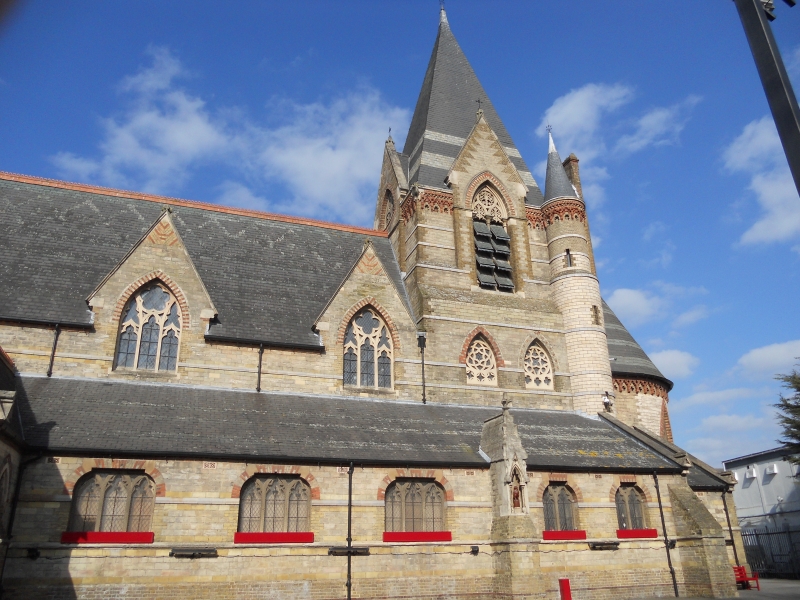 MATERIALS: The exterior is vibrantly polychromatic. The main facing material is a buff terracotta, laid in narrow bands with numerous lipped string-courses; L-shaped blocks are mounted on a toothed brick core wall using a cladding system patented in 1856 by the architect John Taylor Jr. Stock brick is used for the plinth, quoins, jambs and tumbling-courses, with alternating bands of red brick in the voussoirs and gable-heads. The roofs are of purple and grey slates laid in bands and diaper patterns - a feature reinstated in the 1980s restoration. A similar palette appears internally, with stone used for the arcades and black brick headers appearing above.

PLAN: The church comprises a five-bay aisled nave with a projecting south porch, a central tower over the chancel and an apsidal sanctuary with flanking vestries. In its present use as a music hall, the south aisle and the west end of the nave form the foyer, the body of the nave the audience seating area and the north aisle the bar; the chancel arch acts as the proscenium, with the stage in the chancel itself and dressing-rooms behind. A basement, excavated during the 1980s work, contains toilets and plant rooms.

EXTERIOR: The external treatment represents the apogee of Teulon's powerful and distinctive High Victorian Gothicism. Characteristic features include extremely steep gables and roofs, acutely-pointed arches, idiosyncratic window tracery formed of unmoulded stone bars, and the bold juxtaposition of square, angular and rounded masses. The nave projects forward from the flanking aisles, the west front having two two-light lancets with pointed-quatrefoil heads, a large circular window formed of three interlocking trefoils, and a small oculus at the apex; below is a shallow gabled west porch with an arch of toothed brickwork, enclosing a shoulder-arched west doorway with a Star of David in the tympanum. The aisles have broad shoulder-arched windows of three-lights; the three clerestory windows above are extremely tall, their quatrefoil heads rising up through the eaves-line to form gabled dormers. The deep south porch has stepped buttresses flanking an archway with two orders of colonettes; the inner archway has a cusped cinquefoil surround with fleur-de-lys terminations. Broad buttresses in the end bays of the aisles help support the tower; the western pair, on the line of the chancel arch, have tall gabled copings and empty statue niches. The tower itself is a top-heavy mass with a steep pyramidal roof and an arcaded red-brick corbel-table, through which the belfry louvres - and the corresponding triangular windows to north and south - are carried up into gabled dormers with intricate, quasi-Islamic tracery. Clasping the south-east corner of the tower is a cylindrical stair-turret-cum-chimney-stack with a steep conical roof. The semicircular apse has three tall two-light windows with sexfoil heads, and a corbel-table like that of the tower.

INTERIOR: In the nave, octagonal stone columns support stone arcades with outer courses of red and yellow brick and black brick headers. The nave roof, faithfully renewed after the 1981 fire, is a complex hammerbeam structure reinforced by decorative iron straps. The chancel and sanctuary arches support the tower above and are correspondingly massive, with clusters of engaged shafts on huge projecting corbels. Double rows of acutely-pointed arches divide the chancel from the aisles. The chancel ceiling was destroyed in the fire and not replaced, allowing the tower to be used for flying scenery; the massive timbers of the roof and bell-frames are exposed overhead. The windows in the apse are framed by elongated shafts, and the apse roof is a complex assembly of flying ribs and curved wind-braces.

(None of the original fittings now remain. Those inserted by the Brick Lane Music Hall include gaily-painted trompe l'oeil screens in the aisles, brass chandeliers and light-fittings in the nave, and a proscenium arch in the chancel with tasselled velvet curtains.)

Silvertown has its origins in the industrial village that grew up around SW Silver's rubber factory, established in 1852 alongside the newly-built North Woolwich Railway and the half-completed Victoria Dock. In 1859 a local missionary, the Revd H Douglas, appealed in the Times for funds to build a church for the settlement. St Mark's was built between 1860 and 1862 on a site given by the dock company, to the designs of SS Teulon. The church was built to seat 1,000, at a cost of approximately £7,000. Silvertown continued to grow during the late C19 with the expansion of the Royal Docks and the development of big industrial sites such as the Tate and Lyle sugar refineries, but heavy wartime bombing and the gradual demise of shipping from the 1960s onwards saw the local population decline steeply. Much of the area's housing was swept away by slum clearance, and St Mark's was declared redundant in 1974. Newham Council purchased the building five years later with a view to converting it into a museum, but these plans fell through. In 1981 the church was badly damaged by fire; the roof, largely destroyed in the blaze, was renewed as part of a 1984-9 restoration by Julian Harrap, funded by the Council and the Docklands Development Corporation. The Brick Lane Music Hall, established in Spitalfields in 1992, converted the building to its present use in 2003-4.

Samuel Sanders Teulon (1812-73) was a leading mid-C19 ecclesiastical and domestic architect, noted for his vigorous and highly personal approach to the Gothic Revival idiom. Born at Greenwich, the son of a cabinet-maker of Huguenot descent, he trained at the Royal Academy Schools and with the architects George Legg and George Porter before establishing his own practice in 1838. He designed a number of large and extravagant country houses, including Shadwell Court in Norfolk (1856-60) and Elvetham Hall in Hampshire (1859-62). He also built, restored and remodelled 114 churches, to designs that often reflected his Evangelical churchmanship - a fact that gained him the intermittent hostility of the Ecclesiological Society. His accepted masterpiece is St Stephen's on Rosslyn Hill in Hampstead (1869-71); his most prominent work is probably the memorial fountain to the anti-slavery campaigner Thomas Fowell Buxton in Victoria Tower Gardens next to the Palace of Westminster (1865-6).

The former St Mark's Church is listed at Grade II* for the following principal reasons:
* Architect: a major work by SS Teulon, one of the leading Gothic Revival architects of the C19;
* Design: an exceptionally powerful piece of architecture which, faithfully restored in the 1980s, embodies the High Victorian Gothic at its most restlessly original.