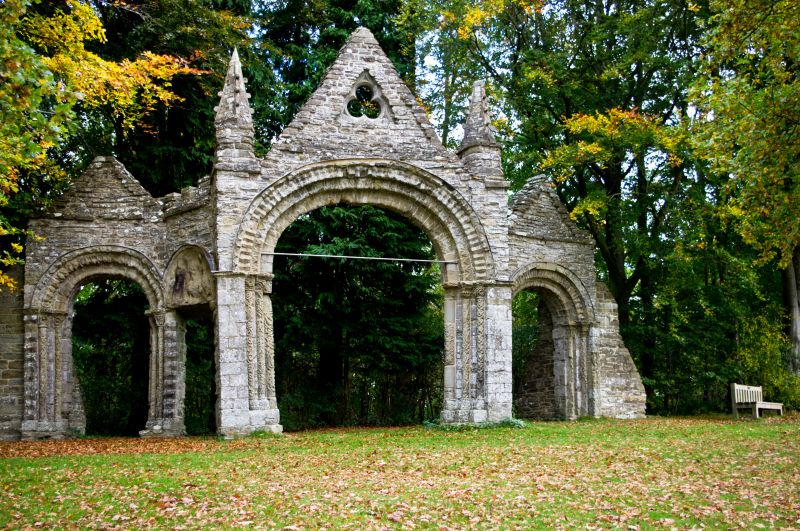 Eyecatcher, formerly part of church. Early C12, relocated in mid-C18. Sandstone
ashlar. Former chancel arch in centre flanked by two arches breaking back
on each side. Central arch: a distorted semi-circular arch with C18 pediment
pierced by a quatrefoil and with two C18 crocketted pinnacles. Arch of three
orders, much eroded, the inner and outer with chevron ornament, middle order
has a roll flanked by an arrow-head ornament. The label is enriched by an
arcaded ornament. Responds each have three engaged shafts, to left (west)
scrolls and birds to outer, pairs of human figures, set in interlace in middle,
scrolled inrichment to inner. Right-hand (east) respond outer shaft has rings
connected by grotesque heads enclosing doves, middle has winged monsters in
interlaced vine-ornament, inner respond shaft is lost. Capitals of outer shafts
survive and hve Dragons within interlace. Outer arch to right-hand (east)
side of centre is semi-circular, of three orders the inner with roll moulding,
the outer with a scrolled bank terminating in a grotesque head to the left.
The middle order is carved with a series of animals and human figures, perhaps
signs of the Zodiac. Responds each have two engaged shafts and an outer order
with chevron enrichment. Capitals include dragons and human figures. The
left-hand outer arch is broadly similar in design. Arch immediately to right
of centre has a tympanum bearing a Christ in Majesty, to left of centre another
tympanum with a very eroded Harrowing of Hell. Much of the detail has been
weathered. The large arch was the chancel arch, and others (with the separated
tympana) were the doorways. Scheduled as an Ancient Monument, County No 155.
(BoE, pp 288-9, RCHM 3,p 179-180).