A Grade I Listed Building in Shobdon, County of Herefordshire 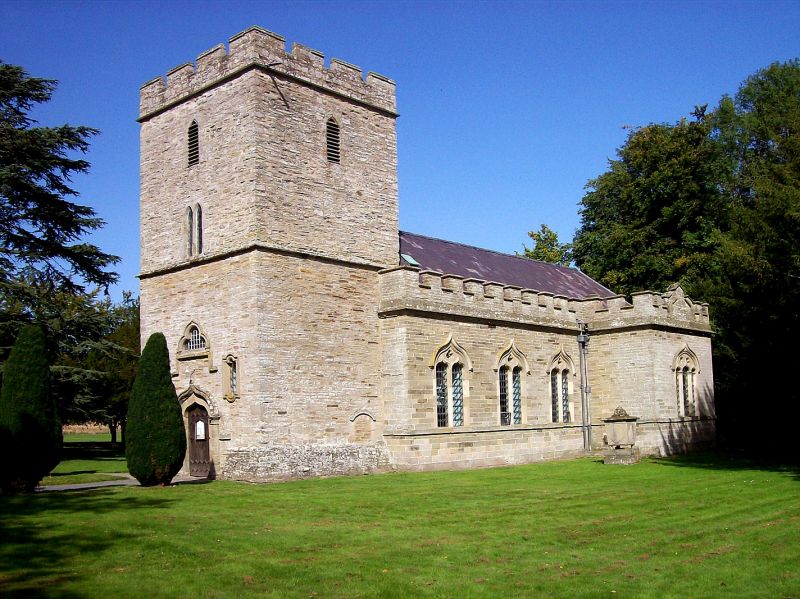 West tower of two stages with crenellated
parapet, battered plinth and string course. Belfry has window in each wall
of one segmental pointed light. West wall has window of two pointed lights
below the belfry. C18 west door has an ogee head and label, with engaged
columns to responds. Above is a trefoiled window flanked by two smaller
windows. Boarded door has applied strips forming hexagonal decoration.
Nave of three bays with crenellated parapet and three windows: two ogee
lights under an ogee head containing a quatrefoil, with labels. Transepts
have crenellated gables, south and north windows of three ogee lights under
a four-centred head containing two quatrefoils with an ogee label. Chancel:
blind to north and south with 3-ogee-light east window under a four-centred
head with ogee label. Interior of tower has a coved plaster cornice and a
plain stone staircase leading to west gallery. Ogee-headed east door with
door similar to west door. Nave has west gallery of 1829 supported on two
slender Corinthian columns, the front of gallery has quatrefoils to panels.
Between each window there is an ogee headed Gothick plaster panel bearing a
memorial. Coved and enriched cornice . Transepts separated from nave by
three pendant ogee arches with triple engaged columns to the responds. The
south transept, the family pew, has a large marble Gothick fireplace.
Chancel arch of similar tripartite design with a finial to central arch.
The north and south walls each have two trefoil headed stone Gothick panels.
East window has a plaster architrave. Fittings: tower has, two memorials
on south wall, a stone cartouche to John Handford, died 1678, and an oval
panel with enriched border, scrolled side pilasters and pediment, to Ann
Chaplin, died 1684. Nave has C18 pews with elaborate ends pierced with
quatrefoils at top and an ogee-arch below. Pews in transepts divided off
by C18 wrought iron railings. Pulpit is a three-decker, with main pulpit
under an elaborate sounding board and red velvet hangings, reader's desk
with bend ends similar to the pews, and pierced back with crocketted finials,
and a lectern. Altar rail with enriched moulded handrail. Chancel also
contains two Gothick arm chairs. The south transept has six Gothick chairs
with ogee backs. Font in crossing is C12 with four lions around the column
supporting a simple bowl. Hereford school style carving. C18 font in north
aisle has an octagonal bowl on an octagonal pier and moulded plinth. C12
arches and tympanum were relocated in C18 to form the Shobdon arches (qv).
This church is an outstanding example of the Gothick style.