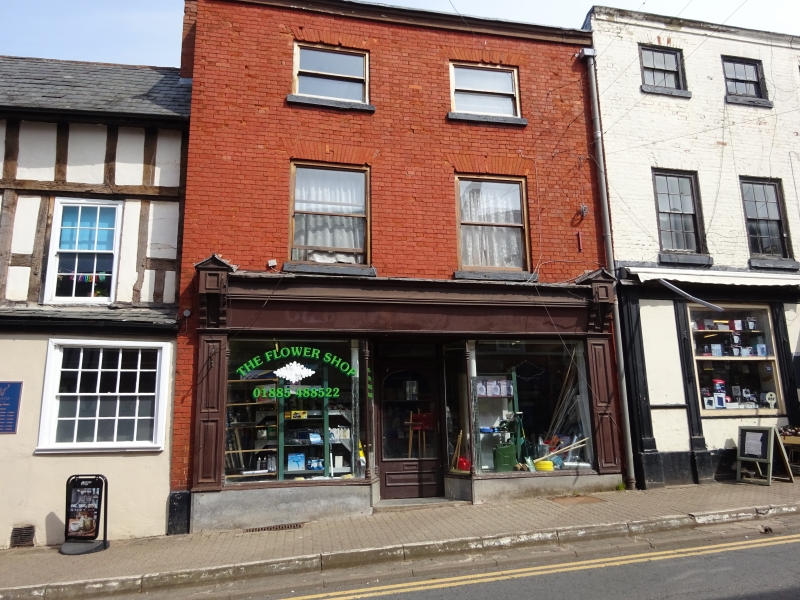 II
A shop with flats above. C17 with later brick façade and shop front.

MATERIALS: Probably stone rubble with timbers, and red brick to front. The shop front is timber and plate glass.

PLAN: The building is rectangular in plan and of three storeys.

EXTERIOR: It has a two-bay colourwashed brick front with moulded eaves. There are two sash windows to the first and second floors set in recessed surrounds with projecting cills. They have replaced sashes with a single pane to each sash. The ground floor has a double shop front with plate glass windows and stall risers. There are flanking pilaster strips and carved corbels to either side of the fascia. It has a lobby entrance with a half-glazed central door.

HISTORY: Bromyard is a small market town that was first recorded in circa 840. No.7 Broad Street is situated on one of the principal thoroughfares in the town adjoining the market square. The street appears to have been fully built up by the early C17, although some of the plots have been re-developed since that time. No. 7 is a C17 timber-framed building that has been re-fronted at a later date. It has an inserted ground-floor shop front, probably of early C20 date.

REASONS FOR DESIGNATION:
No. 7 Broad Street is designated at Grade II for the following principal reasons:
* Architectural: a well-preserved example of a modest, but pleasant urban building
* Intactness: a substantially intact C17 building with a later façade and shop front, which is sympathetic in character to the rest of the building
* Group Value: with many other listed buildings elsewhere in Broad Street