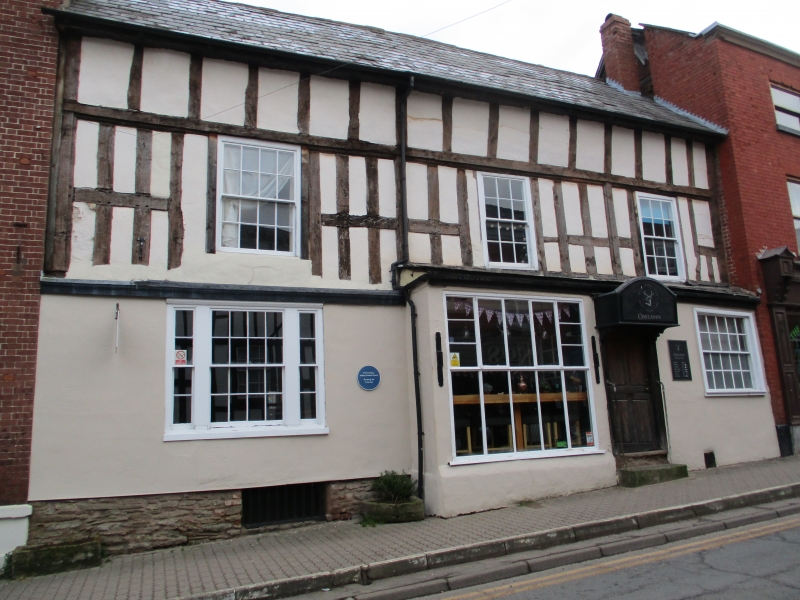 II
A C17 shop with accommodation above, remodelled in the late C18/ early C19, and with an early-C20 shop front.

MATERIALS: An oak timber frame with plaster panels, and a plaster render to the ground floor of the frontage. The chimney stacks are constructed of stone with brick shafts. The fenestration is timber. Internally, there is some plaster decoration.

PLAN: The building has a cross-passage plan, of three, unequal, bays. There is an irregularly projecting rear range containing the stair. The building is of two storeys with an attic and cellars. There have been some minor C20 alterations to the circulation of the building.

EXTERIOR: The three-bay front has C18 plaster render to the ground floor. To the right is a projecting double shop front, of early-C20 date, with stall risers. The left bay is recessed, under-built jetty, with a three-light window to the ground floor. The first floor has had its render removed to reveal the timber frame, including ovolo-moulded posts and girding beam, with gouge-cut assembly marks. There are three late C18/ early C19 sashes at this level, set within earlier openings. To the rear of the left bay is a three-light casement window with ovolo-moulded mullions. To the rear of the central and right bays is a later-C17, single-bay, two-storey range, with a single-storey addition under a catslide roof. Three stacks with brick shafts are set within the roofs.

INTERIOR: The ground-floor rooms have visible timber framing, mainly chamfered axial beams with cut stops. In the left bay there is some former jetty framing, and an altered carved console. The central bay has a large fireplace with chamfered stone jambs, an oak lintel, and an apotropaic [witches] mark. There is also a reset C17 door with C17 strap hinges. Parts of the right bay ceiling are decorated in plaster, with a reeded moulding around the edges of the beams, and raised motifs on the main ceilings panels: stylised fleur-de-lis; square blocks; and four-petal roses. The fireplace has a possible early-C19 double shelf with consoles, under a mantle shelf, with a later cast-iron grate. The first floor also has exposed structure, with assembly marks, and the room in the left bay has a window with ovolo-moulded mullions and modern, leaded lights. The attic is lit by modern dormer windows, although there is evidence of five former dormers in the structure to the front. The stair within the rear wing is possibly the remains of a primary staircase re-sited from the main range. There is a relocated carved console with an acanthus design on the first floor of the rear wing.

HISTORY: Bromyard is a small market town that was first recorded in circa 840. No. 5 Broad Street (The Bookshop) is situated on one of the principal thoroughfares in the town adjoining the market square. The street appears to have been fully built up by the early-C17, although some of the plots have been re-developed since that time. No. 5 Broad Street is of early to mid-C17 date, and appears to have been a dwelling and shop from this time. The rear wing is of slightly later date. The main range was remodelled in the late C18/ early C19, at which time the jettied front was under-built, and it was known as the Red Lion public house. The building is shown as a public house on Ordnance Survey maps from 1887, which closed in 1938. A projecting shopfront was added to the right bays by this time, although map evidence is unclear precisely when, and the ground floor was refitted as a shop in the mid-late C20. Some internal alterations have taken place in the later C20, and the building continues to serve a dual residential and commercial use.

REASONS FOR DESIGNATION: The Bookshop, No. 5 Broad Street is designated at Grade II for the following principal reasons:
* Architectural: a well-preserved example of an urban building of some status.
* Intactness: a substantially intact C17 building, remodelled in the late C18/ early C19, and with an early-C20 shop front, which is sympathetic in character to the rest of the building.
* Group Value: with many other listed buildings elsewhere in Broad Street.