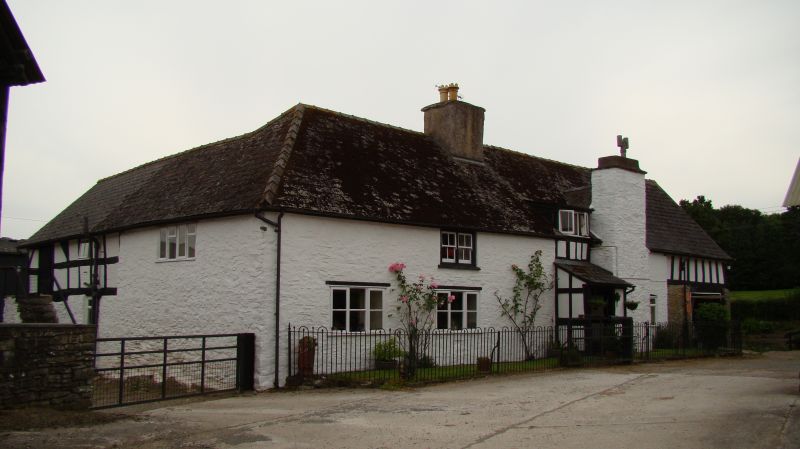 BRILLEY CP -
SO 24 NE
5/8 Lane Farmhouse
GV II
Farmhouse. Circa 1400 origins, rebuilt C17, altered probably mid-C18
and mid-C19 with further late C20 alterations. Timber-framed with rendered
and painted brick infill and some weatherboarding, extended and refaced in
painted rubble; partly hipped slate roof with large roughcast ridge stack.
L-plan. Main range of five framed bays aligned east/west; large chimney at
junction of second and third bays from east end. Bay to east of the chimney
is narrow and includes'the main entrance. There is also an external rubble
chimney adjoining north side of fourth bay from east end. Service wing with
probable former granary adjoins south side of east end. Two storeys.
Framing: one row of panels at first floor level of main range, two rows of
panels at first floor level of service wing. North front elevation: there
are two 3-light casements and a 2-light casement with a cambered head on the
ground floor, a 2-light first floor window with a pair of 4-pane sash windows
and a raking-top dormer with a 3-light casement. Central entrance has a C20
lean-to timber porch and a half-glazed door. There is a C20 garage door at
the west end. External steps lead up to a former granary door on the east
side of the wing. C20 glazed lean-to addition in rear angle. Interior: part
of a cruck truss survives in the main range which would indicate that the
farmhouse is of medieval origin. The framing and roof structure of the C17
rebuilding survive in part. The eastern end of the house was formerly the
upper end and has a ceiling divided into six compartments by beams with
run-out chamfer stops. The westernmost bay was later used as a stable and
is now a garage. The main chimney has back-to-back large fireplaces, one
with a bread oven. (RCHM, III,,p 24, item 13).