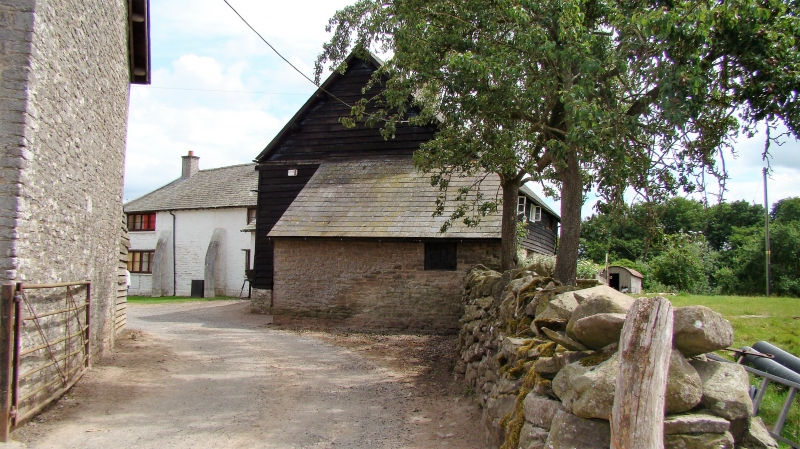 BRILLEY CP -
SO 25 SE
2/13 Llanhedry Farmhouse
19.8.53
- II
Farmhouse, now divided into two houses. C14 or C15 origins, altered C17,
mid-C19 and late C20. Timber-framed, partly cased in coursed painted
rubble, part weatherboarded with slate and corrugated metal roofs, hipped
at east end and three rebuilt brick ridge stacks. Originally a central
hall range of probably four framed bays aligned east/west with cross-wings
at each end. The west cross-wing survives and has a large external rubble
chimney with tiled offsets and a rendered brick stack in the south-east
angle. The east cross-wing has gone but there is a two-bay service wing
to the rear of the east bay with an external chimney and large diagonal
rubble chimney on the east side which may represent part of it. Part single
storey and attic with dormers, part two storeys. Framing: not visible
externally but the south gable end of the cross-wing has a jettied first
floor on shaped brackets. North front elevation: hall has two buttresses
probably added in the C19. Windows are mainly C20 casements. Hall part has
a 4-light and a 2-light window on both floors. The main entrance adjacent
to the cross-wing has a lean-to rubble porch with a catslide roof and round-
headed archway and there is large door within, possibly C17. Cross-wing
has a lean-to outshut at the gable end and two 2-light C19 first floor case-
ments in the angle. Interior: only partly inspected but some substantial
wall-framing survives and also a C17 doorway with a shallow triangular head.
There is recorded to be at least one cruck truss surviving inside and a C17
ceiling in the former hall. (RCHM, III, p 24, item 6; BoE, p 86; Alcock, NW:
CBA Cruck Catalogue, 1981).